Is Blackbeard ever shown having Whitebeard's jolly roger on his back?

I was wondering if it had ever been shown in the manga or anime of Blackbeard possessing the iconic tattoo of the Whitebeard Pirates on his back. I don't remember if it was required of the crew to get the tattoo but it does seem like a lot of them do possess it. 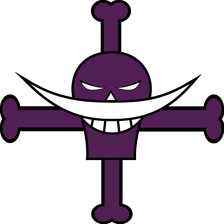 Whitebeard's pirates got the tattoo of Jolly Roger out of respect or to prove their association to the pirate crew. It is safe to assume that Blackbeard didn't sport the tattoo as it wasn't compulsory for everyone to get the tattoo. So that would mean Blackbeard hasn't been seen with Whitebeard tattoo.

Whitebeard's flag is that of a standard Jolly Roger with a large mustache and a cross behind it. Many high-ranked crew members bear the Whitebeard flag symbol on them, including Ace who is seen having it tattooed on his back and being extraordinarily proud of it.

Bibek AryalBibek Aryal
21711 gold badge22 silver badges77 bronze badges
Add a comment  |
0
Want to improve this post? Provide detailed answers to this question, including citations and an explanation of why your answer is correct. Answers without enough detail may be edited or deleted.

From what I've seen the fleet commanders have the tattoos and blackbeard didn't want to even be a fleet commander. As taken from the wiki: -having spent a few decades on their ship, even turning down the chance to be a commander amongst the crew, although that was most likely a measure not to make himself infamous before he was ready to reveal his plans.-

4
Who is it that killed Zephyr's crew and then became a warlord?
3
Did Ace master any Haki abilities?
0
red-haired crew, no devil fruit, still really strong?
3
When do Sanji's half of the crew board Big Mom's ship for the first time?
2
Milk, regeneration properties for devil fruit users?
2
Did both Crocodile and Smoker use the artificial rain powder in Alabasta?
0
Sibling relationship in Big Mom family
3
Have the Marines ever paid out a bounty over 1 millon Berry?
2
Up to what Episode/Chapter of One Piece should i see before playing each of Bandai Namco's PC Games?