What is the other goal Zoro mentions in the Alabasta arc?

In episode 102, during the Alabasta arc, Zoro says:

As for why I still stay with him... being by his side all this time's given me another goal to strive for.

Another translation I've seen of this is:

Since we've been together for so long another purpose is starting to emerge.

This happens around the 9:45 mark during episode 102crunchyroll.

When chopper asks what that goal is Zoro responds:

Sorry. I don't know how to answer about it.

Chopper should know that Zoro's original goal is to become the world's greatest swordsman. Is the second goal that Zoro mentions but can't explain about making Luffy the king of the pirates or is it something different?

You're right. Zoro second goal is to make Luffy the King of Pirates. This has been demonstrated by him many times in the form of his loyalty

Here are a few instances where this has been demonstrated. As the One Piece Wiki puts it:

Zoro seems to have the most respect for Luffy and this deep respect has been demonstrated on various occasions. For instance, he was willing to throw away his dreams and ambitions for Luffy's during the appearance of Kuma in the Thriller Bark Arc without the slightest hesitation. 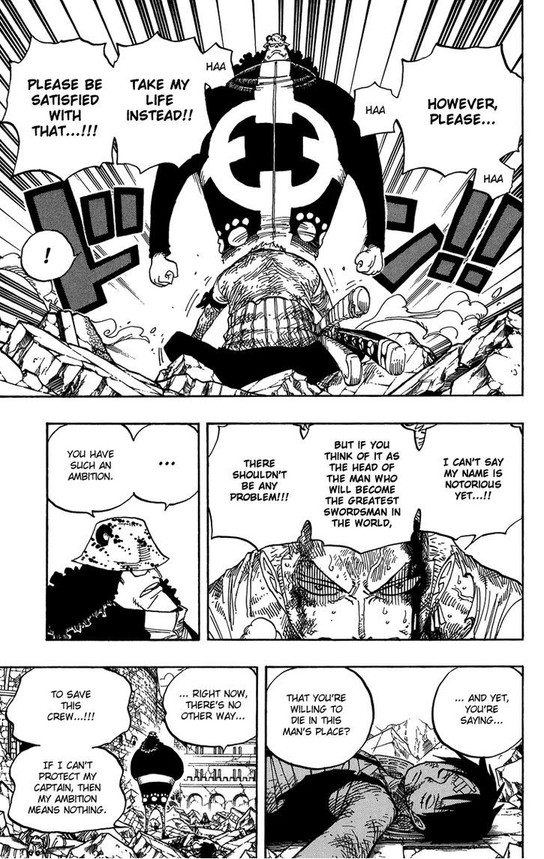 When he was almost on the verge of death from his wound from "Hawk-Eyes" Mihawk in the Baratie Arc he tearfully vowed to Luffy that he would never lose again, asking if it was alright with him as Pirate King.

You can watch the scene here

This respect is not only for Luffy as a person, but also because of his position as captain. When Luffy learned that Usopp was planning on returning to the crew during their time in Water 7 and was immediately ready to welcome him back, Zoro made it clear that a crew member who fought against their captain should not be forgiven so easily. Zoro explained to the others that one should respect their captain unconditionally and he would quit as well if Luffy allowed someone to walk all over him like Usopp, who wanted to rejoin without even apologizing for his actions. When Luffy was distraught after having to defeat Usopp, Zoro reminded him that those hard decisions are part of being captain, and that he can not lose himself. He reminds Luffy that if he wavers, the crew has no one else they can trust.

He gives the said speech here

I couldn't find this scene:

During the Long Ring Long Island Arc after winning the Davy Back Fight contest against the Foxy Pirates, Zoro implied of never becoming a pirate if it weren't for Luffy and commented that he'd have no point in being one if he had ever left the ship.

In Chapter 597 he begged Dracule Mihawk to train him (despite it not being honorable) in order to become stronger for Luffy, his captain. Mihawk comments that in order to make the request Zoro must have found something more valuable than his ambition

i knew the answer.in the same episode another goal which zoro mentioned to chopper.the goal is to always keep sail with luffy.of course ace said to vivi that luffy has strange charm so people can want always with him.so zoro said to chopper the reason he cant answer the another goal to chopper because zoro want to chopper feeling as the same thing as zoro.and i think chopper already feel it when they met foxy pirate.chopper said he just want sailing with luffy and only with luffy.

11
Was the first time Zoro experienced haki in Alabasta?
12
In which episode do they say, that from the outside the Straw Hats don't look like a team?
2
Why didn't Zoro use his Bandana in dressrosa arc?
4
What exactly is the deal with Black Blades?
10
What are the similarities between Gol D. Roger and Monkey D. Luffy? Are they related by blood? What are their relatives' ages?
2
What were those Poneglyphs from the Alabasta arc?
0
Which episode in the Alabasta arc has Luffy ate all the food on the boat and Sanji ask him about it?
3
Law's goal with the One-Piece?
3
Was the Dressrosa Arc inspired by the Alabasta Arc?
0
Does "One Piece Movie: The Desert Princess and the Pirates: Adventures in Alabasta" have anything related to the Alabasta arc in the anime series?