What does it mean when Kenshin says 'oro'?

Throughout the series Kenshin has added 'oro' somewhat comedically to his sentences. Is there any actual meaning to this or is this just a speech style/pattern that he has?

In episode 62 he says it several times in a row and Kaoru points this out. 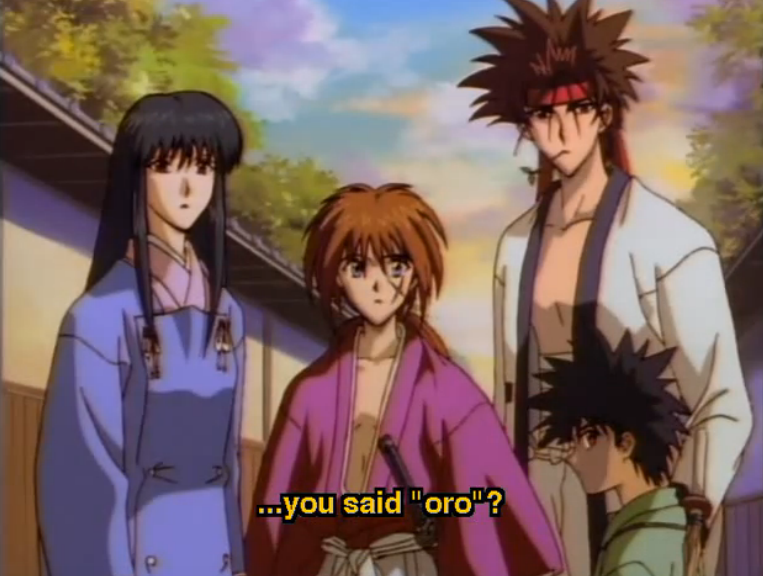 A Japanese expression of confusion. Often used by otaku to indicate confusion/disorientation. People who read/watch "Rurouni Kenshin" may pick up the habit of saying "Oro!" because Himura Kenshin says it often in the manga/anime.

From Wikipedia page on Himura Kenshin:

Nobuhiro Watsuki added Kenshin's trademark "oro" as a placeholder to be an expression of the English speech disfluency "huh". Watsuki notes that he was surprised at how much it caught on, and how much he ended up having Kenshin use the sound during the series

You can watch a few of his Oro moments here (and see that he usually uses it when he's confused/disoriented).

Oro, is nothing more than a confused portmanteau for uttering a word that has no real meaning. Similar to Dale Gribbles use of the word "G'h" when surprised or excited.

Not the answer you're looking for? Browse other questions tagged japanese-language rurouni-kenshin .

17
What is the significance of anime characters' catch phrases?

23
Why does Himura Kenshin say ～ござる (~gozaru) at end of every sentence?
4
How closely does Rurouni Kenshin resemble real life?
8
Can someone explain the term "oranyan"?
1
What does Hondo Eisuke mean when he says, "I think I stood up on the wrong leg as a child."
4
What's up with Mioko's speech pattern?
2
What series are there after Rurouni Kenshin (1995)?
6
Was "defenestrated" simply a literal translation, or part of a bigger concept or joke?
8
English, Hepburn, English, Hepburn, alternating in OP and ED. Why?
1
What exactly does Sukuna say when Itadori breaks into Mahito's Domain Expansion?