How do alchemists draw transmutation circles?

In FMA, alchemists draw transmutation circles that are made up of perfect circles and regular polygons. 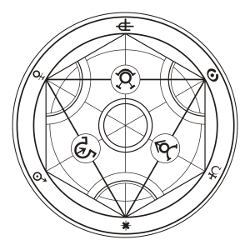 Is it ever show how they make perfect circles and entirely equal angles? I know that it is difficult to free-hand draw things like that. Is anybody ever shown using rulers/compasses, or is it just understood that they are all able to free-hand circles/polygons without them?

First, there is no official word on this. None of the Hiromu Arakawa (the original writer) interviews go into depth as to what the transmutation circles even do, much less how they are created. Neither of the FMA Perfect Guide books mention transmutation circles to any strenuous degree, though it is mentioned that Alphonse has more practice drawing them than Edward (for reasons obvious to those who have seen the series).

There are tutorials online that show methods to draw these circles; however, most if not all that I found used rulers, compasses, or other tools.

Some alchemists use circles that are likely made by tools:

However, alchemists are shown drawing the circles many times: 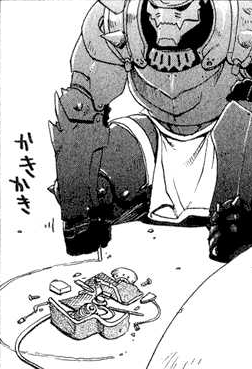 In none of the above circumstances are tools shown to be used to draw the circles. Furthermore, Scar's brother's tattoo likely could not have been drawn with tools as the human skin is not a uniform or Euclidean surface. And also, the Elric brothers are shown, prior to their mother's death, to draw effective transmutation circles without tools.

With all these bits of information together, it's at the very least hard to believe that there are tools used to draw the circles, or even to learn to draw them. No one is ever seen using them; I suspect we are just supposed to believe that freehanding it becomes a skill as alchemists get better.

Yes, they do sometimes show them drawing the circles. Mostly it seems when they are kids though... Check out chapter 23 of the manga when Edward fixes the farm building and when they try human transmutation. Both times he uses a stick or pointy ended object to draw the lines. With the farm building it shows him walking around the building using the stick.

In both cases you can see that the lines aren't perfectly equidistant and have a bit of a squiggly edge to them, showing their hand drawn style.

Another example would be the small transmutation circle that Edward draws on the suite of armor to attach Alphonse, though relatively small you see him draw that one too. It too is in no way clean/sharp.

Maybe it's just the anime that has sharp and clean transmutation circles?

It's been a while, but I don't remember seeing any of them measuring their circles, and it doesn't seem to be particularly important to the plot whether they free-hand them or not.

Now some of the combat alchemists, like Roy for instance, already have small pre-made transmutation circles on-hand(I know Roy had some on his gloves) that they used, so they don't have to draw them every time.

Practice makes perfect, they probably didn't draw perfect figures, though drawing such shapes constantly would most certainly help them do a pretty neat job.

The one thing that the alchemists do get before even being able to apply to join state is a LOT of practice. I think this is the part that's glossed over because it's not important. No one wants to see Al and Ed go through the learning process on that part of it because it's boring.

It appears that this is why so many of the Alchemists specialize in one type of alchemy. They get particularly adept at specific symbols to go with the basic circles and other geometric shapes. Practice and dedication is necessary, as is the will to make it do more than look like a pattern.

They show the dedication in Al and Ed when they are young in some flashbacks. It's almost obsession for them. After enough hours of practice, you become very good at it.