Ask Question
Asked 4 years, 3 months ago
Active 2 years, 9 months ago
Viewed 1k times
9
votes
Closed. This question is off-topic. It is not currently accepting answers.
Closed 3 years ago.
Locked. This question and its answers are locked because the question is off-topic but has historical significance. It is not currently accepting new answers or interactions.

In my childhood (around 8-14 years ago), I remember reading a manga about a small kingdom located around the Middle East where the leader is not a king but a queen. The manga follows about four princesses. The four princesses are sisters. Things I remember about the princesses:

I couldn't recall the title of this manga. Please help me if any of you know about it.

It's Four Daughters of Armian.

Once in Armian, Re-Manu XXXVII is awaiting her death. As it goes for years in history, the dying queen foretold the fate of her four daughters. Divination that would lead them toward their fate, and significance to determine the successor to rule Armian.

The beautiful Swarda is fated to marry a throne man of Persia. The smart and calm Aspasya will encounter a great leader of history.

But fate has its own plan to fool with their destiny. The first and the fourth daughter have their fates entangled, to both inherit the title of Re-Manu. There can't be a country with two leaders, so one has to given way to another. And of course it won't be the cold-hearted and ambitious Manua to give up the crown, who decides to exile her youngest sister.

Little Re-Syahrina has to start her journey to find a phoenix's feather to get back home, while the story is also concerned in Swarda's pain of being betrayed by her lover and sister, Aspasya relationship with a slave called Bahel, and the new Re-Manu who would sacrifice anything to fulfill her ambition, and her sisters aren't excepted.

The description you gave for each princess' fate really matched their story in the series, thus why I immediately reminded of Armian. Below is the daughters picture, started from the eldest (the first) to the youngest (the fourth). 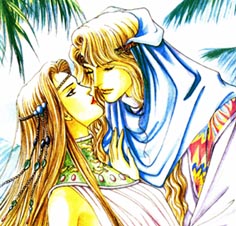 First and eldest daughter, Manua, who later became the next Re-manu (Re-manu is the queen title in their country) after their mother, with second daughter's lover, Rihal (that later, just as you said it, became the father of her son). 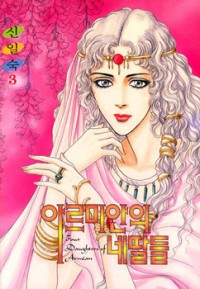 Second daughter Swarda. She married Keser Keses (who is still related to Rihal), that became the King in another country (Persia according to description). I can't remember the motive of her death in Keses' hand, but IIRC, it happened very fast, the setting was a party, and Keses was kind of drunk. I only remember Keses was really, really in love with Swarda, but his love didn't seem to be reciprocated, and that became the seed to the tragedy. 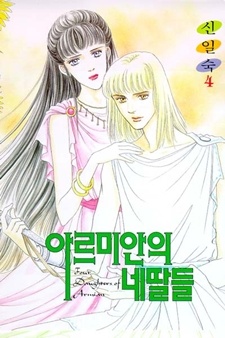 Third daughter Aspasya, with Bahel. I forgot the detail, but yes, they met when they were young and Bahel was in lower position such as slave. Later, many events happened, and they're separated. Bahel became a man with a very important status in his homeland (I forgot whether he's a mere rich man or even someone with the status of a king/emperor. But, well, in description their mother also said it's "great leader in history"), and only reunited with Aspasya many, many years later. IIRC the instrument Aspasya played was harp.

Fourth and youngest daughter, Re-Syahrina, later became the last Re-manu, with what you describe as God of War. I forget his name actually, but searching and searching, I found the name was Eilius. I forget what God Eilius was exactly, but rather than war, it's something more general that descripting chaos. Further search, turned out to be he's God of Destruction, according to this source.

Not the answer you're looking for? Browse other questions tagged four-daughters-of-armian or ask your own question.