Am I missing an entry in the Higurashi series?

Umineko no Naku Koro Ni says "Welcome to Rokkenjima" and "WHEN THEY CRY 3".

I thought Umineko was the follow-up to Higurashi.

Although it's not said anywhere officially, Higurashi no Naku Koro ni Kai is widely considered to be When They Cry 2.

Contrary to Jon Lin's answer, "When They Cry" is not purely an English licensing name. It may be used for the licensing name, but it is actually relevant to the original creation.

The creator of the original sound novels, Ryuukishi07, uses this name and numbers to distinguish/count the works in the "When They Cry" series.

These titles can be seen on the official cover art as proof. I've linked pictures of these covers to the related titles above.

However, interestingly enough, "When They Cry 2" is quite odd. It does not appear on the cover of the sound novels, manga, PS2 version, DS version, novels, or drama CDs. The (original/Japanese release) anime DVD cases and boxes don't even mention "When They Cry"

So it seems that Higurashi Kai was not defined as 2 anywhere officially, but it has been accepted as such by both Japanese and Western fans due to either Umineko being called 3 or the Higurashi Kai anime being dubbed as 2. Who knows where Ryuukishi07 got the idea from. If I stumble upon an official Kai work using When They Cry 2 somewhere, I'll be sure to update this post.

When They Cry 2 refers to Higurashi no Naku Koro ni Kai, as indicated on the side-label of the sound novel: 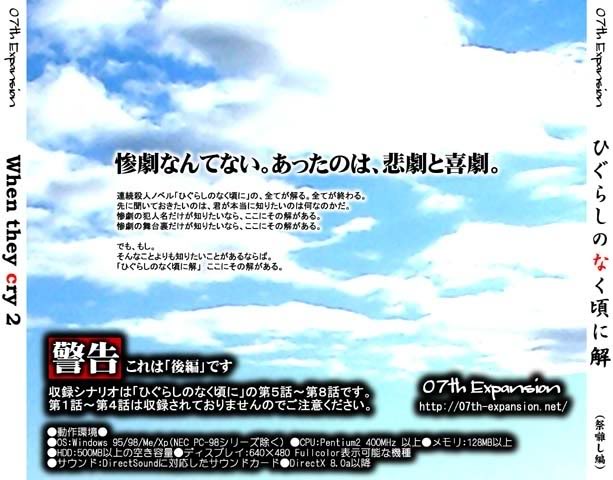 9
What exactly are the rollbacks in Higurashi?
6
Is the Umineko ED used elsewhere?
6
Who's the director?
6
How are Higurashi and Umineko related?
5
Is she adult Rika in the final of Higurashi no Naku Koro ni Kai?
5
What is the "Malicious Trap" in Watanagashi-hen?
1
Is Higurashi Kai of horror genre?