What is the symbol/tattoo on Sebastian's hand?

I swear I've heard of it, but what's the name of this sign and why is it significant? 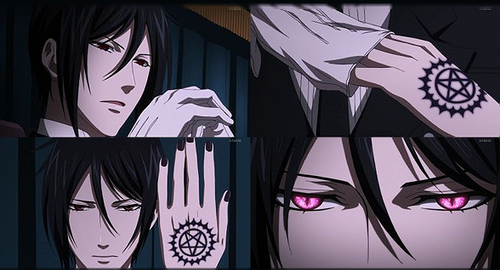 The Pentagram is a five-sided star, usually made with a single continuous line, with the points equally spaced. It is often depicted within a circle. This is one of several geometric star designs representing the mysteries of creation and redemption, the soul of man in its relationship with the Universal Spirit. Magickally, such diagrams are considered efficacious in rites and rituals of evocation and transformation.

Among the Greeks, the pentagram was the symbol of the goddess Kore, who resumed in her mythos the descent and ascent of the human of soul from the Underworld. Her sacred symbol, the apple, shows a five-pointed star when sliced horizontally through the center. The Pythagoreans, who based much of their philosophy on numbers, used the pentagram as an amulet for health and spiritual well-being. They wore the pentagram both upright and reversed and when hiding from persecution, they used the pentagram as a secret sign of recognition.

By the Middle Ages, the pentagram had become a general symbol of spiritual wisdom and truth, and it was marked on doorways and windows to keep evil out of the house. There is evidence that the old village witches made use of the pentagram, which they called the Witches' Foot, the Druid's Foot or the Goblin's Cross.

The Church decided it was no longer proper for Christians to use the symbol after the Christian Inquisition began burning village wise women and identifying them by the sign of pentagram.

After the invention of the printing press and subsequent publication of Agrippa's Occult Philosophy and numerous magickal grimoires, the pentagram became a popular symbol of occult knowledge.

And to add to this, there are apparently two different types of pentagram or pentacle. An upright and an inverted pentagram:

Inverted pentagrams are largely associated with Baphomet, an imagined pagan deity (in other words, a product of Christian folklore concerning pagans), which is revived in the 19th century as a figure of occultism and Satanism. Often mistaken for Satan, it represents the duality of male and female, as well as Heaven and Hell or night and day signified by the raising of one arm and the downward gesture of the other.

Its name may have come from two Greek words, baphe and metis, meaning "absorption of knowledge." It has also been called the Black Goat, Devil's Goat, Goat Head, Goat of Mendes, and Judas Goat. Its first appearance appears to have been during the vicious interrogation of members of the Knights Templar by the Roman Catholic Church during the Inquisition. There was little consensus among different victims' descriptions of the Baphomet.

It can probably be safely assumed that their description of the Baphomet is more a product of the Inquisition's torture methods than of any actual statue that was in use by the Knights...

Fact 3: Writing within the Pentagram

Magicians also use the pentagram as a part of the Solomon Lamen (Seal of Solomon), which is composed of three sigils: the Pentagram, the Hexagram and the Secret Seal (a Mercurial symbol). In this lamen, worn as a necklace by the magician when invoking spirits, the pentagram is used to open a doorway to spiritual forces.

The words on the seal have the following meaning:

Not the answer you're looking for? Browse other questions tagged symbolism black-butler .

4
Why did Kuroshitsuji II use new characters and plot?
4
What's up with the Black Butler intermissions?
4
What does Tanaka do?
2
Why is there an exclamation mark between 'Butler' and 'Grell'?
3
What region was Ciel Phantomhive the Earl of?
3
When does Black Butler take place?
1
Why did the Queen kill Ciel's relatives?
0
Does Sebastian have feelings for Ciel?
1
What is Sebastian's catchphrase 'A Phantomhive butler who can't do this much isn't worth his salt' in Japanese