What's with the huge supernova-like explosions in anime? [closed]

Why do they tend to occur so often in anime?

I'm not really a fan nor knowledgeable, but just curious is there any background behind this.

Here are some examples of what I mean:

Why explosions in general are popular:

It's not much of a mystery & it mostly comes down to two things:

The blinding light of large explosions:

I would say it's a safe guess that this is inspired by a nuclear explosion. The gif below is captured with a good camera, but many clips of nuclear explosion have intensely bright light that the camera cannot record properly - resulting in an almost whiter-than-white colour.

Time comes, and this tremendous flash out there is so bright that I duck, and I see this purple splotch on the floor of the truck. I said, "That's not it. That's an after-image." So I look back up, and I see this white light changing into yellow and then into orange. Clouds form and disappear again--from the compression and expansion of the shock wave.

All this took about one minute. It was a series from bright to dark, and I had seen it. I am about the only guy who actually looked at the damn thing--the first Trinity test. Everybody else had dark glasses, and the people at six miles couldn't see it because they were all told to lie on the floor. I'm probably the only guy who saw it with the human eye.

Finally, after about a minute and a half, there's suddenly a tremendous noise--BANG, and then a rumble, like thunder-- and that's what convinced me. Nobody had said a word during this whole thing. We were all just watching quietly. But this sound released everybody--released me particularly because the solidity of the sound at that distance meant that it had really worked.

The man standing next to me said, "What's that?" I said, "That was the Bomb."

Obviously Japan has been influenced a lot from nuclear weaponry after the bombings of Nagasaki & Hiroshima in WW2. Because of this it finds itself in a lot of Japanese works. In fact, one of the first manga to be translated to english was Barefoot Gen - a survivor's tale from the Hiroshima bombings.

Nuclear energy's intense devastation is also immense power and it's one of the most powerful representations an artist could use to show the strength of an explosion/character.

Many successful works have used this technique, including Dragonball Z, Akira, etc and because of this, their usage has grown even further.

Attempt 3 at trying to understand what your question means - this time I presume you mean the star-like explosions that are in your videos. 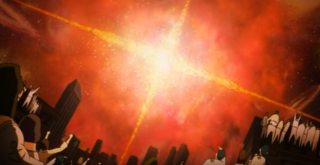 Studio Gainax has these effects as a sort of signature, originally appearing in the very successful Neon Genesis Evangellion. Evangellion has many religious references - including their cross-shaped explosions. 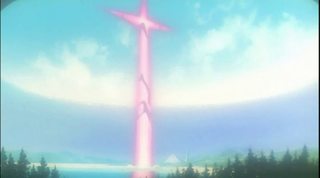 Since then, the studio's work has used these often as explosions. Studio Trigger, which was founded by gainax ex-employees also use the feature a lot - see Kill la Kill for example.

Gainax is responsible for modern usage from their own usage of the explosion type - However, Space Opera was a popular genre in the 80s, causing many shows to be set in space - and also be action-packed, leading to many explosions - some of which being supernova-like. Gundam for instance is one particular show of note from this period.

While your question is poorly qualified and given no bounds, it is probably false. However, in the interest of answering the question, we shall assume you are talking about the subset of Shounen/Action anime.

I'd like to expand @ToshinouKyouko's points of Budget and Genre and include several other considerations for your question.

20
How old is the snaggletooth trope?
9
Why do some Anime have Loli Teachers?
1
Oblivious life-threateningly terrible cooks?
2
What are these designs based on?
2
Why aren't most of the phones in anime smartphones?
2
What's with the fantasy hair?
13
What's the origin of spiral glasses as a Japanese stereotype?
11
Why do the stronger enemies in anime/manga tend to look more human?
5
Why are old anime women often depicted as young girls?