What is depicted on the gate shown in episode 63 of Brotherhood?

I'm looking to get a tattoo of the gate depicted in episode 63, but I don't know what it is that I'm looking for. I know that there are two gates, and one of them is "The Tree of Life".

I'm looking for the other one, depicted in this screenshot from episode 63 at 16:46: 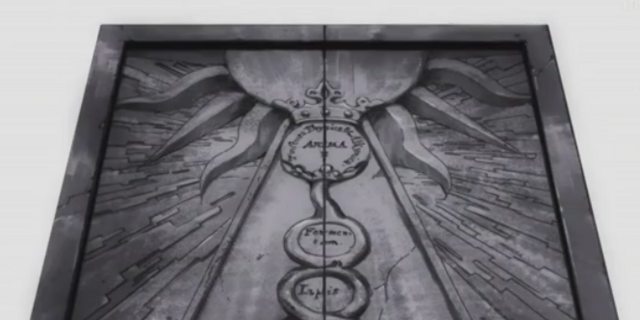 What is depicted on the second gate?

There are three different gates in all.

The first one (Ed's) is the so called "tree of life" described in this question.

The gate you are looking for is the second gate (Al's), which is the European Alchemical scheme depicted in George Ripley's Marrow of Alchemy, based off the Kabbalah's Tree of Life and Kundalini's chakra system, which is probably derived from Samuel Norton's Catholicon Physicorum. 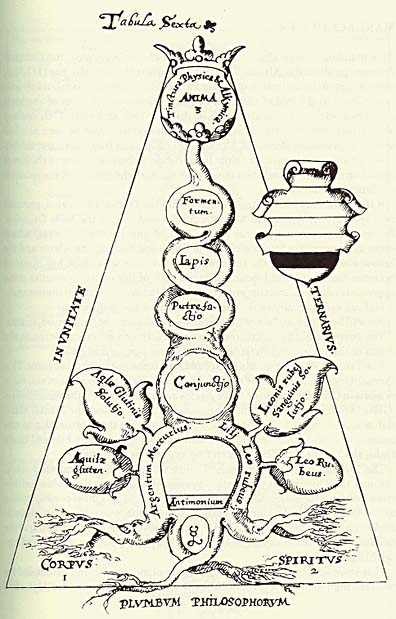 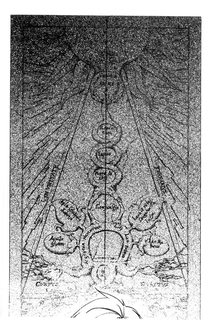 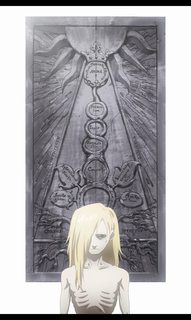 The third gate ("Truth's"/Mustang's) does not appear to be derived from known alchemy symbology from real life, but it share's similarities (two intersecting triangles) to the tattoo on Riza's back, which is related to Flame Alchemy. 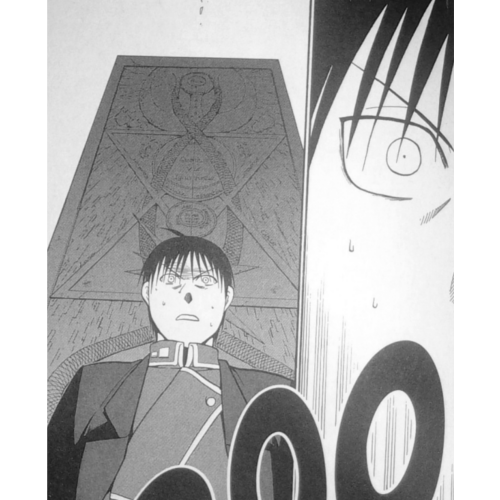 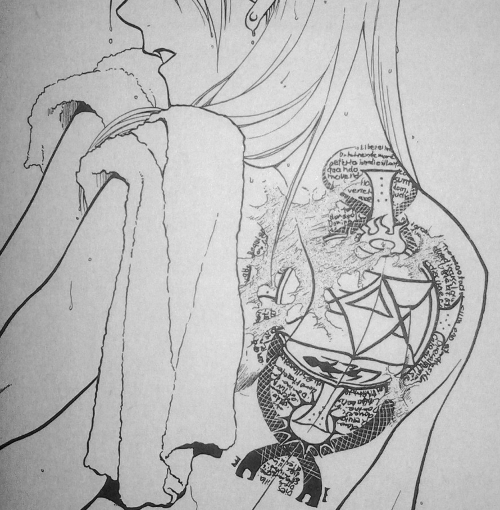 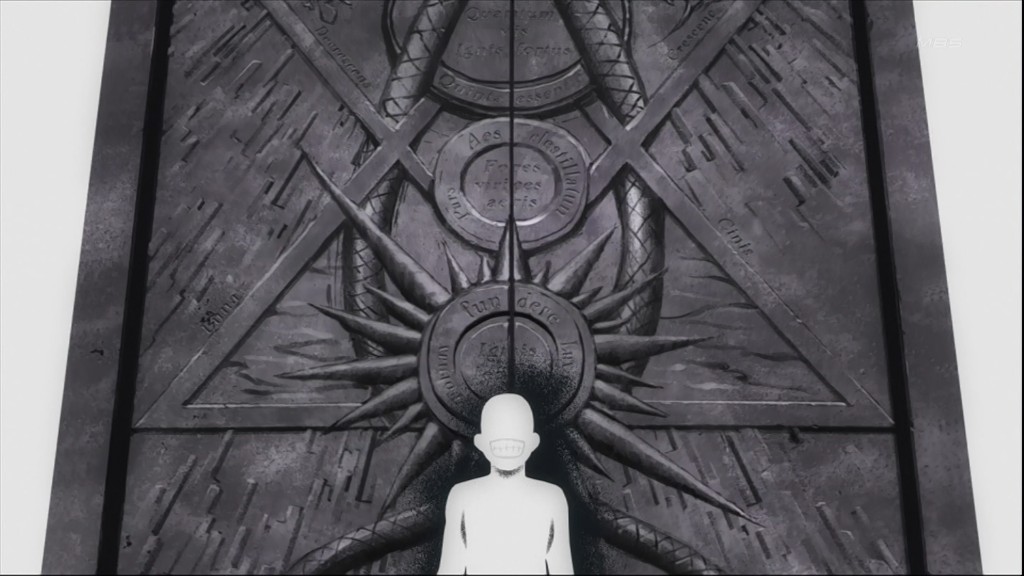 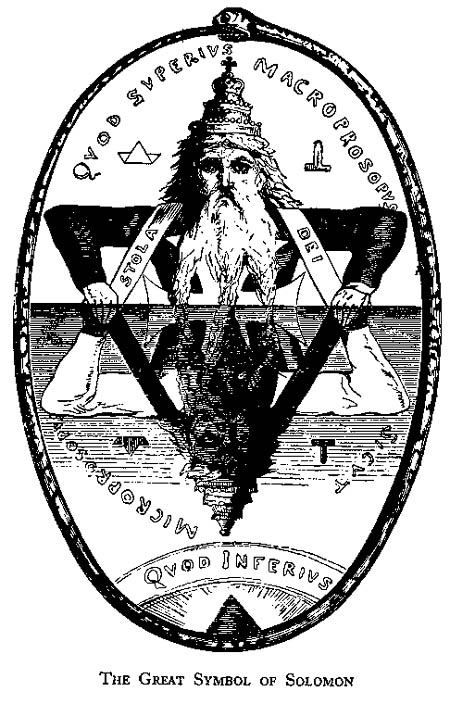 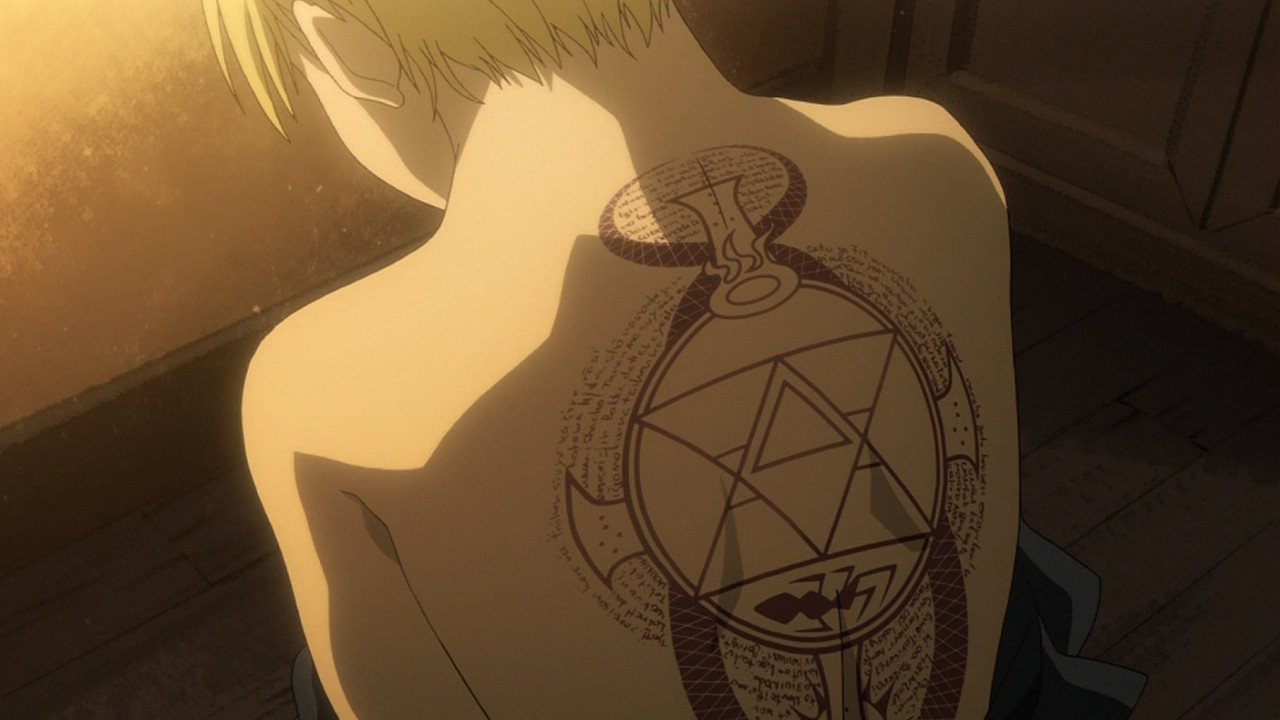 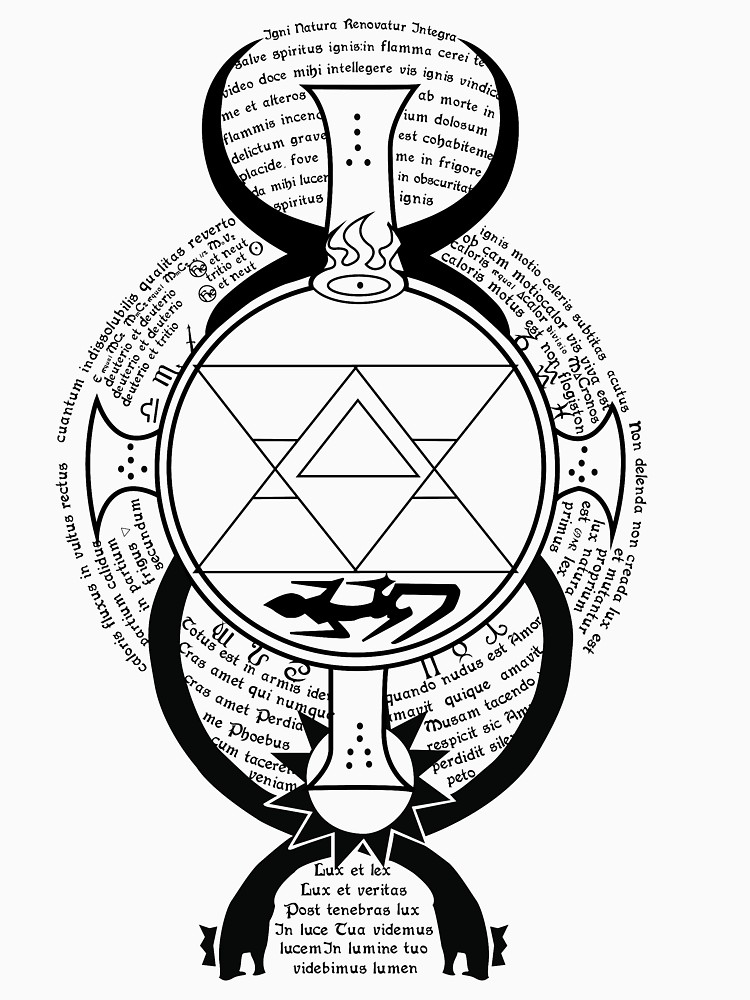 As people before me have already stated; Al's gate is from The Marrow of Alchemy. If I remember correctly, the symbol represents purification, and it is believed that the only way to obtain total purification is to get rid oneself of their physical body (something Al is pretty familiar with).

Roy's gate is a lot more complicated than that. Yes, parts of his gate are shown on Riza's tattoo; however the parts on his gate do not represent flame alchemy as many people believe, but instead the sun and the serpents represent something called the marriage of the Red King and White Queen. Basically Roy and Riza's relationship is an analogy for the Red King and White Queen.

It's a little complicated, but here's a YouTube video where I go a bit more into depth about Roy's gate.

25
What is this huge symbol on the door in the Truth realm and in the Neon Genesis Evangelion opening?

8
The Tree of Life in Fullmetal Alchemist
7
What does it mean that Gluttony is a fake Gate of Truth?
5
How Edward managed to escape from Gluttony?
6
Does the world on the other side of the gate exist for alchemy to exist?
9
Why isn't Lust covering up her tattoo?
2
Which episode of Fullmetal Alchemist Brotherhood had a lot of transitions with a black screen and white text?
3
What half episode specials follow Fullmetal Alchemist: Brotherhood?
0
Shouldn't Edward Elric still be able to perform alchemy?