What is meaning of “Brush Your Teeth. — Unripe Fruit” in Hunter x Hunter?

At the beginning of the Hunterpedia segments at the end of episodes of the 2011 Heaven's Arena arc, the opening image contains the English text: 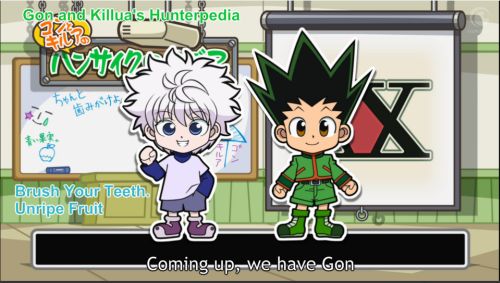 The rest of the writing is in Japanese, I assume there is some sort of inside joke. Can anyone provide a context for those two lines?

I may have the phrases figured out. Initially I was extra confused as to why there would be such out-of-context English phrases printed in a Japanese anime. Senshin cleared that up, and I realized everyone could read the text.

I've now watched some of the original 1999 Hunter x Hunter anime series. In those, the psychotic villain (and sometimes ally) Hisoka occasionally refers to Gon as "unripe fruit". (I do not believe he ever says that in the 2011 version.) The context is, even though Hisoka feels sorely tempted, it is too early to destroy Gon (and perhaps Killua) now. He is like unripe fruit, and it will be much more enjoyable to destroy the boy mentally and physically once Gon is older and gained significant skill.

Knowing that everyone can read "brush your teeth" helped me see the image afresh. I thought Killua was just smiling, but now I see it is a huge, clenched-teeth smile. Plus his right hand seems to be grasping an invisible tooth brush and motioning as if demonstrating proper tooth brushing technique. The "Hunterpedia" environment is being presented as a classroom.

The one remaining puzzle is why Gon's left hand seems to be motioning as well.

'Brush your teeth' is for Killua (so it is blue) and 'Unripe Fruit' is for Gon (so it is green).

Killua is such a great sweet tooth. 'Brush your teeth' is meant for Killua. I don't think he has ever brushed his teeth. Or even if he has, (just like a parent does) he is just told to put more effort on his brushing.