Why is Hiiro a Nora?

We know that she has spent a lot of time with Yato (because they've shown to be together since childhood and Hiiro was his first Regalia) and also really cares about him. Yato himself says: 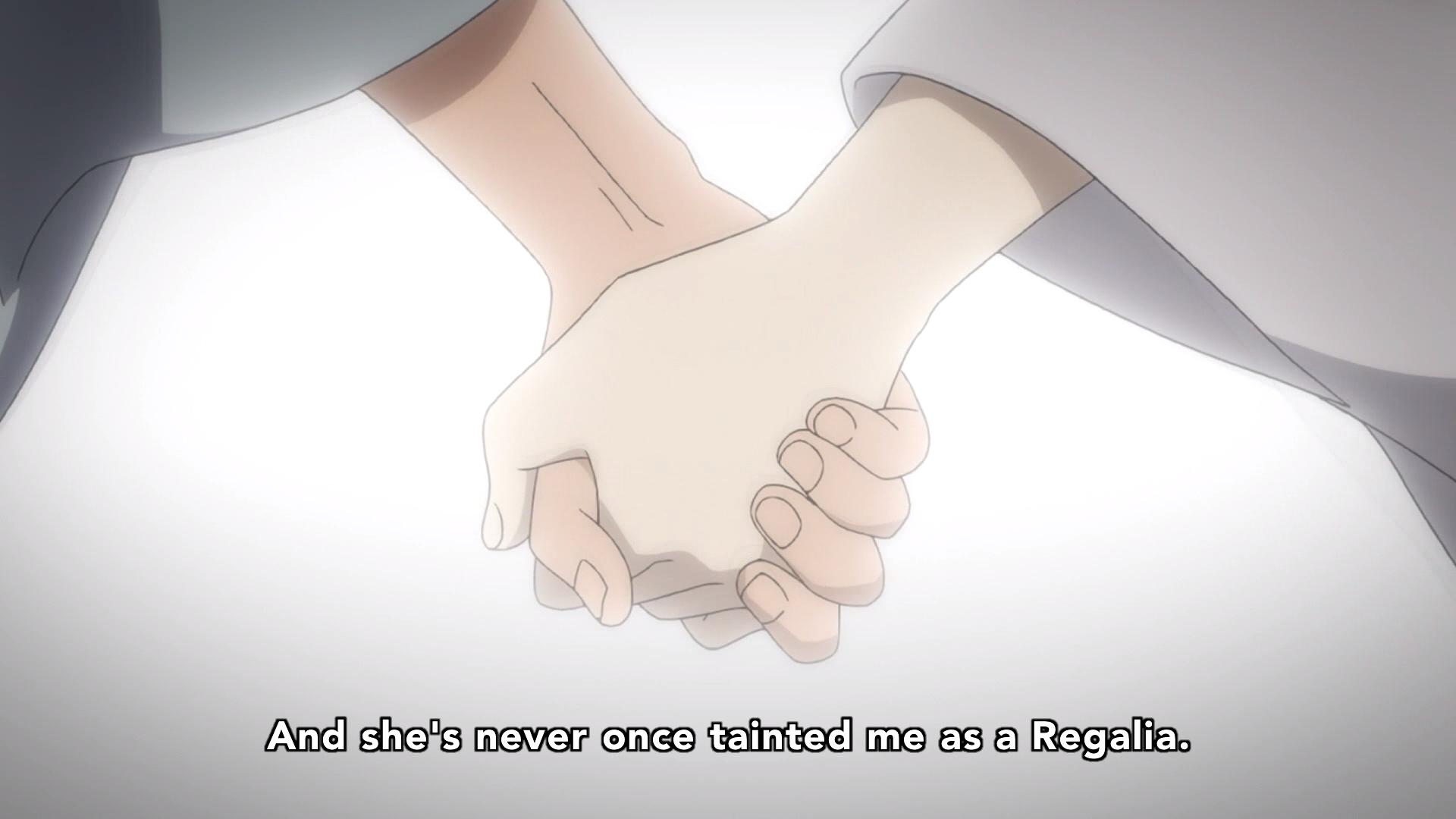 This means that Hiiro does care about Yato and has never done anything which she thought wasn't for the good of Yato. Just before this scene, we also see Hiiro saying that she wouldn't mind dying in the underworld as long as Yato was with her.

So why is it that she is a Nora? Why did she allow other Gods to name her?

She's first named by his father (the "sorcerer" is mentioned as her true master in the wiki so I suppose that means he named her first) as Mizuchi and then his father let Yato name her as Hiiro.

I think she never tainted Yato because she cares for Yato so much that she never did anything a regalia shouldn't do to taint their master.

I haven't read that far in the manga so I can only suspect that the sorcerer allows her to be named by others for some sinister plan against the heavens.

So, to start...let's look at what the title 'Nora' actually means. In context, a 'Nora' is a 'stray' shinki (Regalia). They are compared to stray cats who wander around and beg attention and affection from anyone who will give it. (This also gives you a hint as to what the title of the series means... Noragami...a compound of Nora Kami...Stray god. Yato, the stray god who wanders around and begs attention and remembrance from anyone who will give it).

In short, a Nora is a term for any Shinki with more than one name, used interchangeably with the title 'Stray.' This is seen as a bad thing, first because the 'name' of a thing is sacred and important in that universe, and we later learn that

Strays are feared due to the fact that they own more than one name. A Stray cannot be bound using any technique that link to their names easily; unless all names of a Stray is known, other shinki cannot use Restraint or any other binding techniques. Strays can also change hands from one god to another should their names be called, literally betraying the master they were serving at that time. This makes them dangerous, uncontrollable, and unreliable.

Sakura sees that Hiiro also has the name 'Mizuchi' on her back, in addition to the name Hiiro that Yato gave her. Later we see 'Father' use that name to turn her into a weapon to break Sakura's name and turn her into a Phantom.

This shows us that even when she was only working with Yato, she was already technically a Nora. As for why she has so many masters, that's because 'Father' commanded her to do so. She claims she's been working with other gods simply because Yato hasn't called her in so long...but there might be more to it.

At this point, we are going to stray a bit into speculation as to why he would want that...but it's actually pretty clear once you think about it. The reason that gods will contract with a Stray is that it allows them to wield a 'disposable' regalia for dirty business that they don't want to involve their own Shinki in. This means that Nora is witness to all of that dirty business that gods are getting up to that they don't want their own Shinki exposed to, or that may count as a Sin for their Shinki (I'll get to that in a second). And since her ultimate loyalty is to 'Father,' that means that he is also privy to a lot of the stuff gods are up to that they don't want others to know about. In short, Nora is a spy for him...and no one suspects it because everyone assumes she has no true master.

Now, as for the 'never blighted' thing...from conversation with Kazuma and direct evidence from Yukine, we can see that 'sinning' is a subjective thing for a Shinki.

We learn that he suppresses his emotions and blocks out any sense of guilt when he is doing 'what must be done.' And thus if you believe you are doing the right thing, it doesn't count as a sin. He bluntly says as much in Chapter 52. As a result, he's done stuff that could be considered 'wrong' but didn't blight Bishamonten. For example, when Tsuguha turns into an Ayakashi, he kills her with a boundary line and doesn't sting Bishamonten.

When Hiyori was going nuts and turning into an Ayakashi, he believed it was wrong to hurt her...and so hitting her with a Boundary line caused him to sting Yato.

Both of them did basically the same thing...but it counted as a sin for Yukine because he felt guilt over it and thought it was wrong...while Kazuma did not.

And, in Nora's case...we see her commit several attempted murders, participate in countless actual murders, participate in blackmail, and intentionally trigger the insanity/death of several Shinki. All things that are (objectively) sins...but despite being named by Yato, she never stung him with these actions. She can kill innocent people without a problem...while Yukine couldn't even injure a single proto-ayakashi without stinging his owner.

So, the fact that Nora has never stung Yato may not mean she actually cares for him so deeply that she would never do anything wrong that would sting him. Instead, it is more likely the she is a full-blown sociopath who never feels guilt over her actions...and since 'sin' in the Noragami universe is dependent on guilt and feeling like you are doing something wrong...a sociopath with no conscience could do whatever they want and never sting their patron god. And, again...this fuels the fact that Nora could be used by any god to do anything they felt they needed to do...because she never feels guilty about it. If a god felt they needed to kill a few innocents, their own Shinki might feel guilty about doing so...and thus sting them. But with Nora in hand, you don't have that risk.

So, TL;DR: Nora is a Stray because Father commanded her to be one. Nora may or may not actually care so much about Yato, but simply never feels guilt, and thus never stings anyone. Her personality is pretty much textbook sociopathy.

I have a theory as to why Father was able to name her Nora: because he killed her.

Think of it this way: Usually, Regalia are souls of humans. The only stray we know (that I remember) is Nora. What if Nora was a god? And Father killed her to take control of her like she was interfering and so he got rid of her and turned her into a slave? That would explain why she has no free will like some Regalia do. She's jealous of Yukine because something deep inside her wants to protect Yato from Father and from danger.

This is a weird theory but I bet later in the manga we'll finally get her backstory and discover more about her. Possibly that she is actually Father's daughter and he killed her so he could keep control of her.

5
Why does Yukine have three different names?
5
Is there a reason Yato couldn't summon Nora in the final battle of the first season of Noragami?
8
Why is part of Tenjin's hat transparent?
4
Did Yato cut Hiyori's ties to the Far-Shore in episode 6 of Aragoto?
10
Why does Nora's darkness/corruption not affect Yato (or any other God that has named her, for that matter)?
5
Why was Ebisu killed by the Pacification Ring?
2
How did Nora return from the Underworld despite being left there by Yato?
8
Why is the fee for Yato-gami to do things just ¥5 (5 Yen)?
1
Why did Yukine stop stinging Yato?
3
In Noragami, why does Nora attack Yukine?