Why did Funami Yui accuse Toshinou Kyouko of playing dirty?

In episode 4 minute 1:35 to 1:45 of the Third season of Yuru Yuri, Yui accused Toshinou of playing dirty after she won against Ayano. From what I understand, they are playing bomberman-like game. What is dirty from Toshinou blowing up Ayano?

The following anwer is made by assuming that they are playing on a Bomberman version similar to one of those which actually exist.

A proof that this may be similar to a known version of Bomberman is the bonus Ayano is trying to pick up, which looks really similar to Fire and Full Fire bonuses

In the classic games Bomberman, there are a lot of power-ups.

One in particular, Kick, gives to the one who collected it the ability to kick away Bombs. This is the only ability that grants the power to move a bomb after it has been planted.

What's more, it is important to know that bomb explose after a determined delay after it has been planted.

But what happend exactly?

Ayano did plant a bomb in order to destroy a wall and therefore is unable to move (if she does, she may be killed by her own bomb) 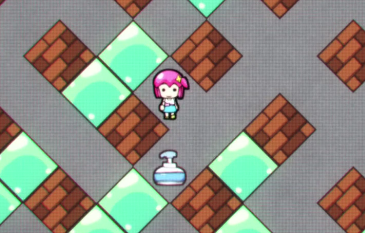 After the wall exploded, Ayano's first reflex was to leave this dead-end to pick-up a bonus. 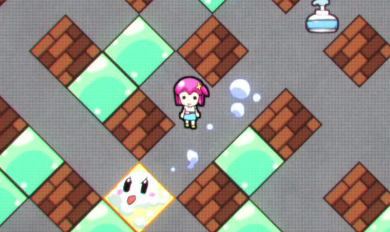 Toshino may have anticipated that Ayano would have this behavior.

Toshino planted a bomb near to herself, managing to time it so it would explode just a little bit after Ayano's bomb. Then she pushed the bomb with the bonus we talked about earlier (we can be sure of this as long as the ability to move bombs is unique to this bonus) and killed Ayano.

Why is Yui reacting this way?

Bomberman is usually meant to be played around strategy, which means placing your bombs in order to force the enemy players' movements, and therefore block them. As an example, placing a bomb on a line will force a player to go to the other end of this line. By playing on this kind of forcing, you can "place" enemies on a dead-end or a really close place where they are more vulnerable to bombs.

The natural reaction of an awared Bomberman player is to spend the less possible time in dead-ends. They are deadly because you cannot go through bombs unless you have the Bomb Pass bonus.

Here, Toshino is just waiting for enemies to destroy walls in order to kill them instead of placing bombs herself.

Therefore, this kind of trick can be seen as unfair or dirty because it is playing on a survival reflex and is not really the part of a global strategy.

7
What did Chinatsu make?
8
Was Kyoko and Chizuru's first meeting ever shown in the manga?
7
What is this sheet Toshinou Kyouko is using?
11
How did Toshinou Kyouko's personality change?
6
Is Akaza Akari the same grade as Toshinou Kyouko and Funami Yui?
7
Are the items featured in Yuru Yuri San Hai! cross review based on real items?
4
Why did Sakurako call Akari a "betrayer"?
8
What is the method used by Oomuro Sakurako in her "lucky color" lottery?