Were any of Houkago Tea Time's songs described or referred to in the manga?

The K-On!! anime features a large number of songs performed by Houkago Tea Time. In addition to staples like "Gohan wa Okazu" and "Fuwa Fuwa Time", there are a number of other ones that I don't believe ever got playtime in the anime, like "Watashi no Koi wa Hotchkiss", to say nothing of the OP/ED themes and their B-sides, plus a ton of character songs (and not just for the main five, but also for Ui, Jun, and Nodoka).

Now, I haven't read the manga, but it's clearly inconceivable that all these dozens of songs could have been described in any substantial way in a mere four volumes of manga. In fact, I have to wonder if any of these songs were even noted as existing in the manga.

Do any of the songs in the anime originate in any way from the manga (even if only by virtue of a shared title or a lyrical excerpt)? If so, which ones?

(Ignore "Tsubasa wo Kudasai", which is a cover of a very old song.)

This is all based on memory as I don't have the manga volumes to hand at the moment, but several of the songs were mentioned by title in the manga, and a few of them had lyrics shown that were used in the anime versions.

"Fuwa Fuwa Time" was in the manga, and we even see its lyrics in one scene when Mio hands her draft of the song to the others for feedback. If I remember correctly, "Watashi no Koi wa Hotchkiss" and "Fudepen Ballpen" are mentioned on the set list before one of the concerts. I believe that "Curry Nochi Rice" was also mentioned late in the manga, and I'm fairly sure the storyline where Yui first writes "Gohan wa Okazu", then writes "U&I" for Ui after Ui falls ill happened in the manga the same way it happened in the anime. I believe we did also see the lyrics for "U&I" when Ui finds Yui asleep at her desk after working on the song all night and looks over what Yui wrote.

The opening and ending themes were never mentioned or hinted at in the manga, and several of the other songs--e.g. "Pure Pure Heart", "Tenshi ni Nareta yo!"--were associated with anime-only plots. But a surprising number of the songs in the anime were actually mentioned by title in the manga.

Edit: I bought the digital editions and hunted down photographic evidence of my earlier claims.

In Volume 1, we see Ritsu and Sawako react with horror as they read Mio's draft of "Fuwa Fuwa Time". 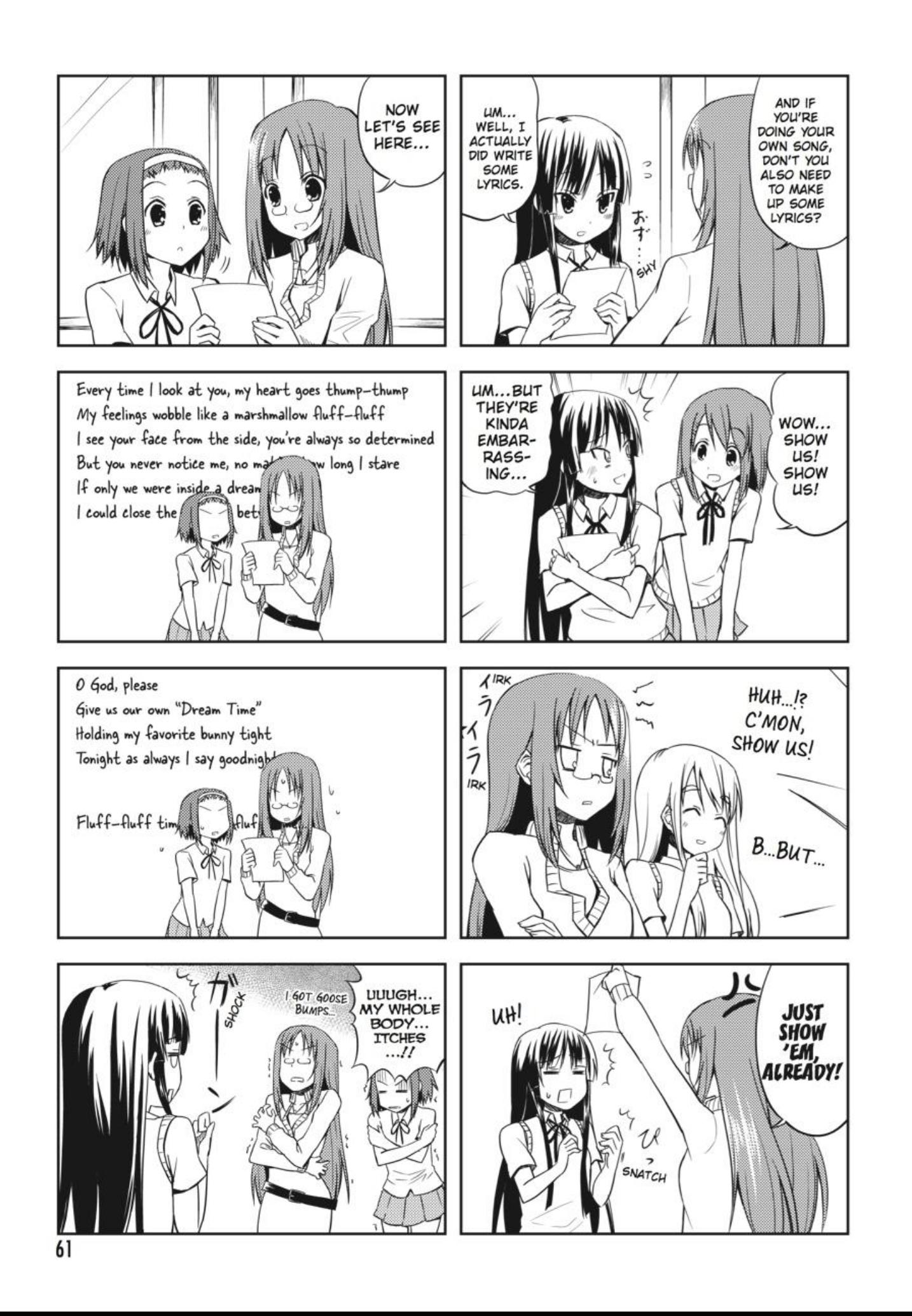 In the background of the third and fourth panels on the left, we can see the first few stanzas of the song translated into English. 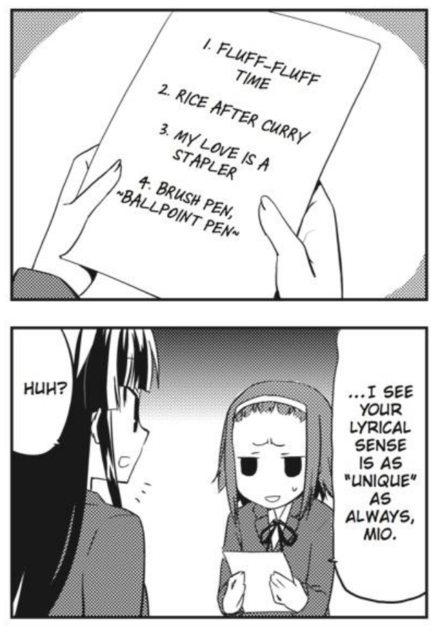 And in Volume 4, we see Yui write "Gohan wa Okazu": 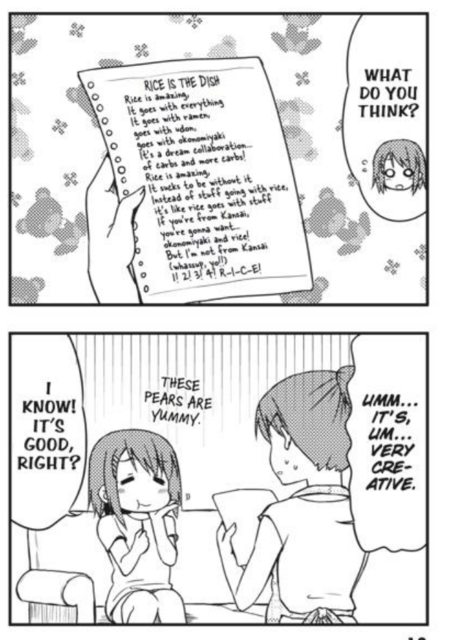 In Volume 4, we also get a few lines from a song that Mio was working on, which provokes the usual revulsion in Ritsu and Azusa: 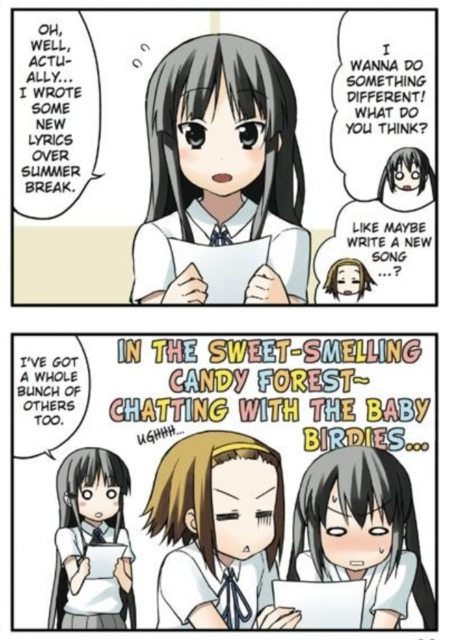 Of all the songs released, Fuwa Fuwa Time, Gohan was Okazu and U&I are the only pieces that appeared in the manga. This can be verified by noticing that they are only songs whose lyrics are officially attributed to the original author. You can look at the Note 28 of the relevant article in the Japanese Wikipedia to see this. Note that even for these songs, only some part of the songs appeared in the books; they were significantly augmented by a professional lyricist.

As is noted by another answer, there were other songs whose titles appeared in the books.

6
What instruments do the members of Houkago Tea Time use?
3
How long ago were the flashbacks?