Why does Moral shoot through a pillow?

In the episode 4, Moral is shooting someone through a pillow with his golden gun. 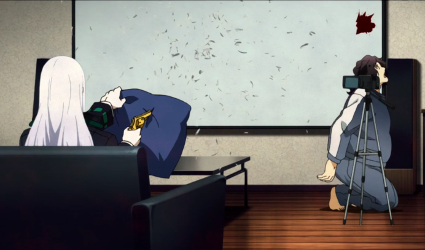 Why did he do this instead of directly shooting on the guy?

Theory 1: As senshin mentioned this is likely meant as a silencer, or suppressor, for the gun.

It seems to be a pretty popular belief that shooting through a pillow would dampen the sound of the gun. I can't find any reliable information on this unfortunately, only some videos that show some effect. However, the decibel values from the first video are roughly in line with what Wikipedia says is a typical dampening achieved by a real suppressor, i.e. around 130dB which is still very loud. In the end the sound levels also depend on many other things such as sub- or supersonic bullets or the firing mechanism as discussed here.

Theory 2: A pillow could be used to contain splatter, in particular keep it off the shooter's clothes.

The latter doesn't really fit the distance between target and pillow in the image and since you say the sound effect is muffled in the anime, Theory 1 seems to be what they were going for.

Not the answer you're looking for? Browse other questions tagged hamatora or ask your own question.