Who are those people with shark teeth in GTO?

In GTO, some character faces transform into weird/creepy faces. 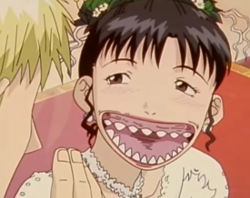 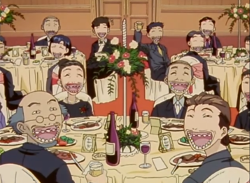 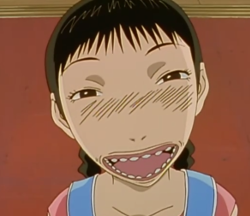 What is the signification on this transformation? Who are those people with shark teeth?

The girl of the episode 40

The girl of the second episode is Kumiko Fukada. 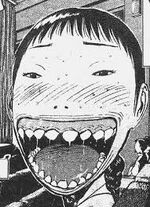 The reason why she does have shark teeth is because Fukada is written 鱶田and 鱶 means "(large) shark", therefore the author is making a pun (Source)

Even thought she only appear this time in the anime, she is more present in the manga :

In both the anime and the manga, there is an episode where Murai receives a letter from a girl which the name start by the letter F. The girl playing the mediator, Kujirakawa Fuyumi, is in fact the one who sent him the letter, while Murai is attracted by another girl. 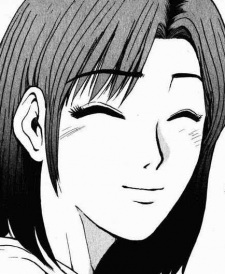 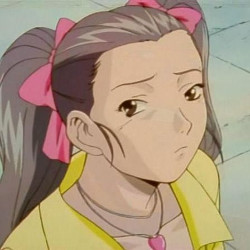 At the left, Aoi Fukada. At the right, Akane Fujita

At the end of the chapter, in the manga, we find out that Murai has been confounding Aoi Fukada and Kumiko Fukada. Because Aio is not named that way in the anime, there was no such pun, therefore we never saw this part of the story animated.

The presence of this girl in the 40th episode may only be a reference of the manga.

The girl in the episode 35

As long as this wedding does not happend in the manga, we can only presume, but as she really looks like Kumiko Fukada so we can guess that this is the same girl.

The pun is the same as for Kumiko : because everybody is Fukada's family is named Fukada, everybody has the same shark teeth as Kumiko as if the name caused this family trait to be hereditary

I only watched a few of GTO anime, but I read the manga till the end. The girl in the last picture is Fukada Kumiko (鱶田 久美子). The kanji 鱶 (fuka) means shark.

I don't know if it exists in the anime or not, but in the manga Kumiko has a crush on Murai Kunio. Due to a series of event, Kujirakawa Fuyumi thinks that Kunio also likes Fukada. First, Kunio finds a love letter in his locker. The sender's name was erased and only the word F remains in the translated manga (maybe the word Fu ふ in the original manga). Later, Fuyumi gives him more love letters and said that it's from her friend (Fumiko) who is very shy. Kunio actually likes another Fukada with different kanji, Fukada Aoi (深田 葵) who only appears in the manga. The kanji of Aoi's Fukada is more common than Kumiko's, so Kunio thinks it is Aoi that Fuyumi means. But he later he thinks it's Fuyumi who send the love letters. So he tells Fuyumi that he can't accept the girl's feeling since he has already had someone he likes. 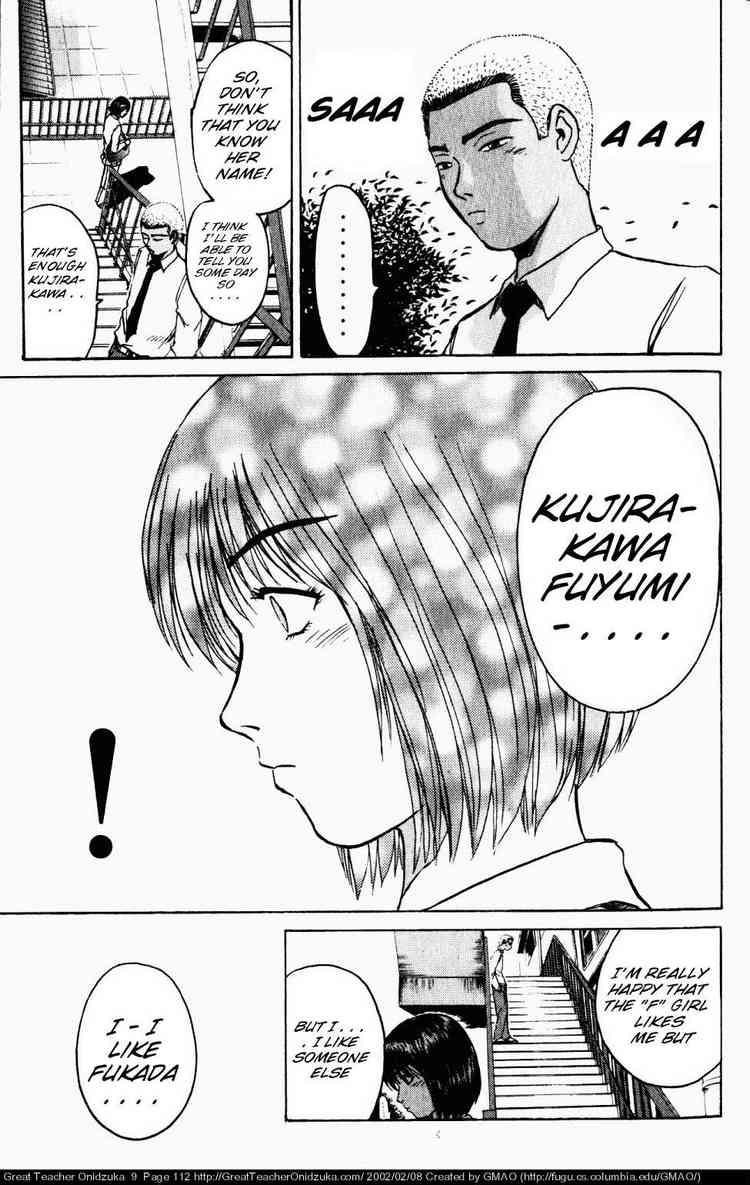 Then Fuyumi tells him that it was Fukada (Fumiko) who wrote the letters. Fuyumi gives Kunio a movie ticket and tell him to meet Fukada in a theater. The movie ticket is for the Jaws movie, a famous horror movie about a giant shark. Note that Fuyumi also has a hidden crush on Kunio. 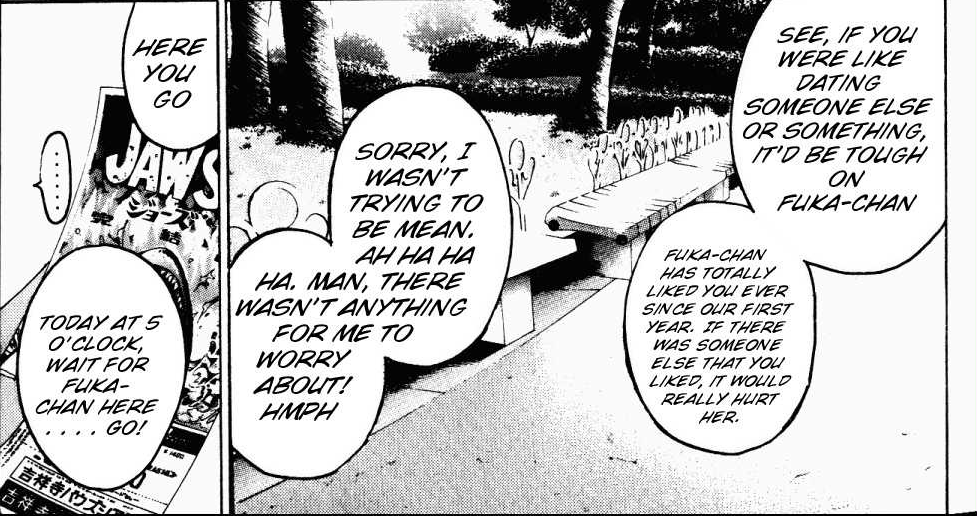 Later, Kunio was shocked when he see the real Fukada who send him love letters via Fuyumi. 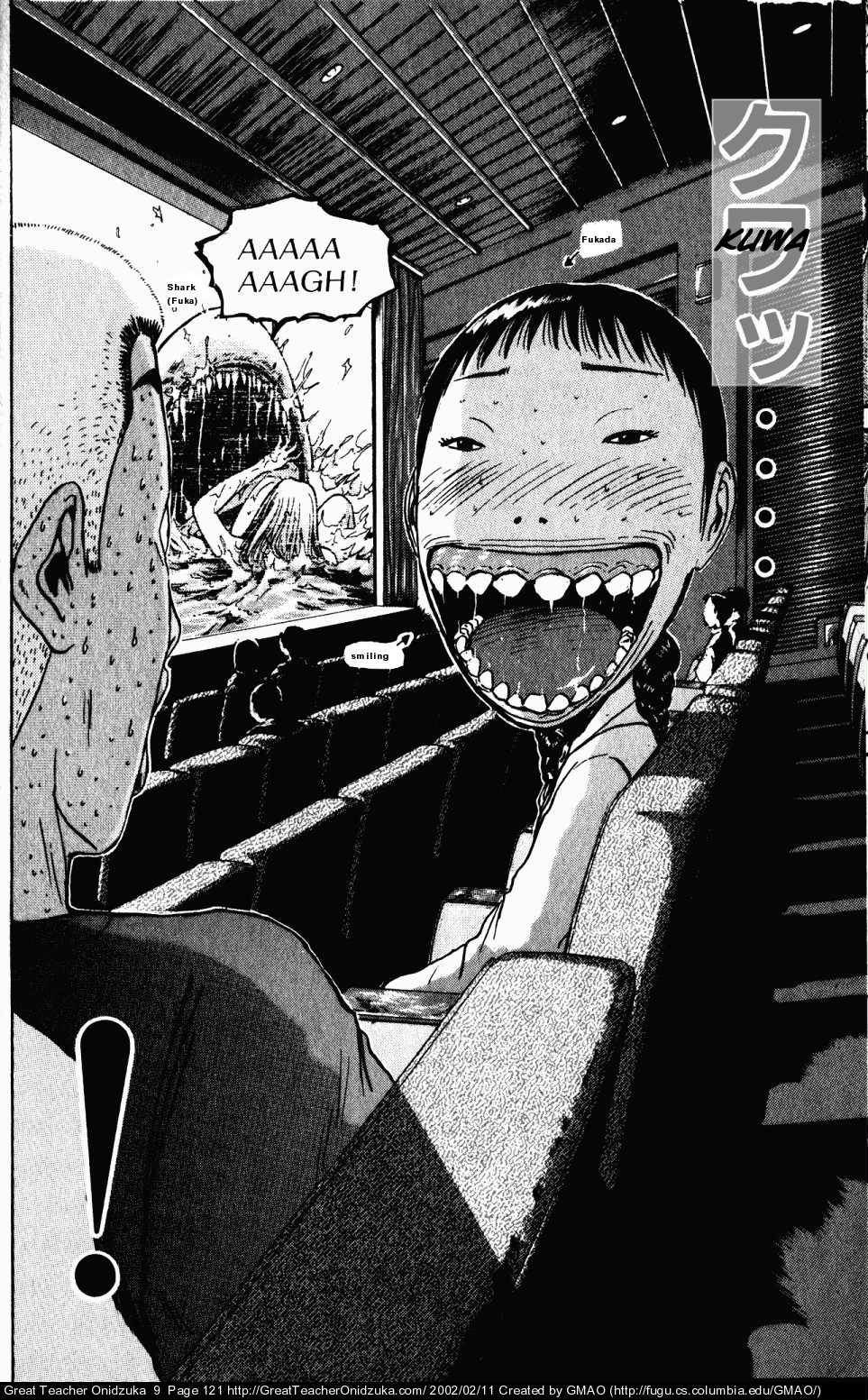 Not the answer you're looking for? Browse other questions tagged great-teacher-onizuka or ask your own question.

3
Who are these three girls supposed to be in episode 25 of Great Teacher Onizuka?