What are the blue downward lines in used to symbolize depression or sadness called?

Does anybody have any idea what these are called? 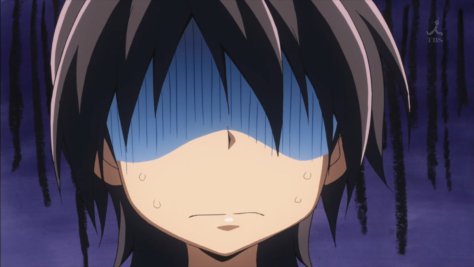 I've only seen them referred to as blue lines so far.

I've seen them represent depression, sadness or disgust before but could someone clarify this also?

Sorry to answer a question that has already an accepted answer this late, but I felt like giving more information in addition to CuddleBunny's answer.

These lines are called 垂れ線 (taresen, drooping lines) or just 縦線 (juusen, vertical lines). They are a type of 効果線 (koukasen, effect lines) that are used in manga/anime/games, such as the "speed lines" used to emphasize action or speed.

Taresen, and by extension, all koukasen, are a type of 漫符 (manpu, symbols used in manga to denote emotions or actions). Although the term taresen doesn't seem too popular, the term koukasen (and manpu) in contrast is widely recognized, and it is one of the drawing notions a person has to know in order to become a mangaka.

Taresen often exaggerates the image of a shadow being cast on the face of the character when it is hanging his head. In some other cases, the lines are drawn under the eyes, to denote dark circles or eye twitching, on the side of the head where it can be assimilated to the "cold sweat" manpu, or even on the back of the head.

Taresen was first introduced in manga, in black and white, a support where one could easily build a parallel between the lines and what they were supposed to represent in reality. Instances of taresen were seen in manga going as far in time as 1971 (in a manga of Moto Hagio). Taresen are commonly used to denote, as other people said, depression, disgust and impatience.

The lines can come, depending on the case, with another manpu: the face being replaced by shadows of various colors, like black, dark purple, or blue. Blue color often denote a feeling of cold. This can be associated to cold sweat, or just plain cold. For example, it can often be seen when characters eat too much ice cream and feel the cold rising to their head (brain freeze).

TV Tropes lists this as "Blue with Shock." This and other exaggerations originate in Manga where the lack of motion and detail makes it hard to portray a variety of emotions. To overcome this limitation authors use various simple effects to express the same meaning. This is referred to as Manga Iconography.