What are goku and Vegeta talking about?

This is taken from chapter 6. What are they talking about? 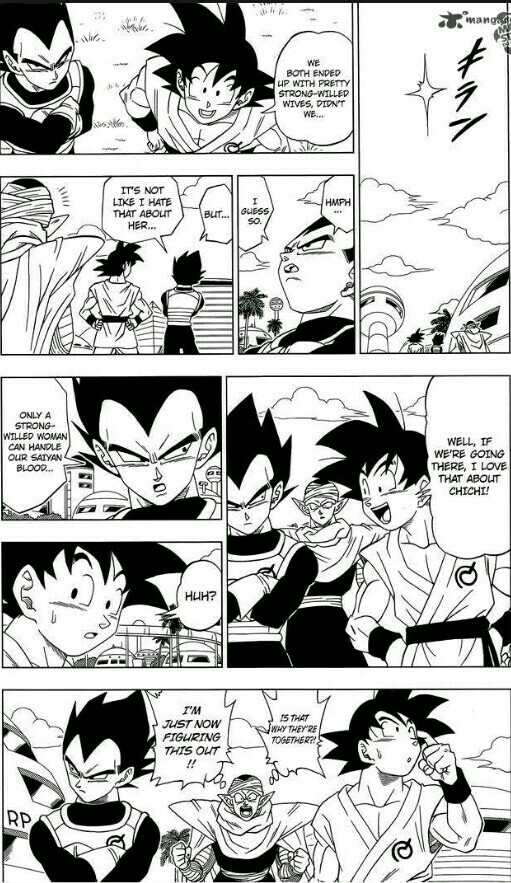 Goku made this comment after he saw Bulma slapping Jaco and telling him to hurry up.

Goku then says that he loves that about Chichi. He knows that she has to do all the things alone, since he's training all the time. Staying alone most of the time, looking after the family, earning, doing the household chores alone is a lot to ask from one's wife. He understands this and the statement can also mean that if she wasn't so strong willed, he wouldn't be able to train all the time and would have to help out with the chores... The fact that he's able to train 24x7 means a lot to him.

Vegeta's statement can also be explained by the fact that Bulma has had to go through a lot with Vegeta. She has had to put up with his ego and pride. If my memory serves me right, there used to be many quarrels between them during the Cell Saga in DBZ. But now, he even took out time from his training schedule and took Trunks and Bulma to the amusement park. This signifies that he has changed. To change someone to this extent is a great feat. And if Bulma wasn't strong willed, we may not have known Vegeta's family as we know it today, neither would have Vegeta changed to become so human.

Meanwhile, Piccolo is wondering whether that's the reason that Goku-Chichi and Vegeta-Bulma are together.