The credits for each episode of Kowabon feature credits for the positions "CA", "TK", and "AP". For example, from episode 11: 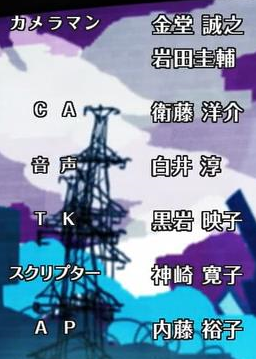 What are these positions? The official website for Kowabon doesn't list these positions on its staff page, and I don't believe I've seen them in the credits of any other anime I've watched. (With these being two-letter acronyms, I have no idea how to search for them effectively.)

I suspect that they might have something to do with Kowabon being rotoscoped (note: the topmost position in the screenshot above is "cameraman", which is something you're only likely to find when rotoscoping is involved). Though, then again, I had a look at the credits of an episode of Aku no Hana, and didn't see these particular positions credited (though they could've been there under some other name).

I didn't know about kowabon, but In general.

Not the answer you're looking for? Browse other questions tagged anime-production kowabon or ask your own question.

8
What is TK's actual name?

8
What are the animation studios outside the Tokyo area and why the majority is concentrated in Tokyo?
25
Why are there sometimes darkened scenes in new anime?
5
What are the highlights in eyes called?
15
What are OVAs and how are they different from Specials?
11
What does the position of “theme song assistance”(?) entail?
2
What are Tsurime Eyes and Tareme Eyes? Why do the characters have them?
5
What are model sheets and why do animators use them?
8
What are these charts and what are they for?
7
Was this really the original American/English-language opening/intro to Sailor Moon? If so, why was it so heavily changed?