Are there any religions in Pokemon?

From what I remember, no character in Pokemon is shown going to any sort of religious house of worship, and there doesn't seem to be much if any mention of religion/religious beliefs until Sinnoh, where there is lore following Arceus's creation of the world. Are there any organized religions in the world, worshiping either Arceus or some other deity/pantheon?

It's not a religion from the present Pokemon World, but in the manga series The Electric Tale of Pikachu (Dengeki Pikachu), in the fourth chapter (Haunting my Dreams), Brock says to Ash that in "ancient times" the people who lived near the Pokemon Tower in Lavender Town worshipped Pokemon as gods: 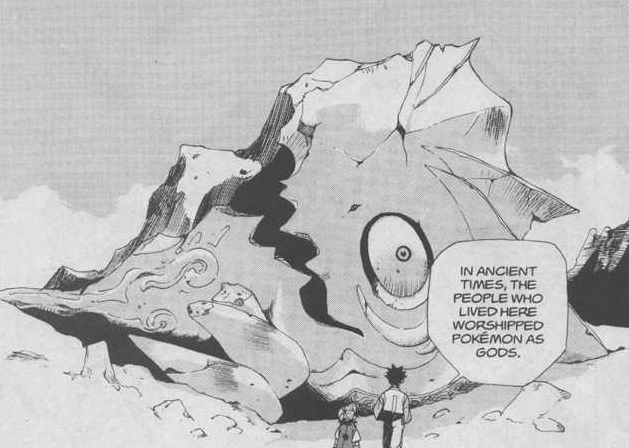 Neither in the Anime, nor in the Games or the Manga is ever mentioned something about religions. Religious aspects can be seen sometimes (like your example of Arceus, but also the wise men in the Sprout Tower or the Slowpoke-temple in the anime), but they aren't a real topic.

Either in the anime or in one of the games, it's mentioned that most of the people at least in Lavender Town are religious. But besides of that, nothing was mentioned in the anime/manga/games.

Well, I don't know if this would work, but there was that big crystal flower tractor beam hidden underground under Geosenge Town in X and Y, and the long living AZ used it to kill off dozens of Pokémon to bring back his floette, correct? I think that Lysandre, for the sake of his 'beautiful' world, sought to unleash that crystal flower tractor beam and eradicate all Pokémon as his duty, so I guess he believed religiously in a world without Pokémon. (That's also a little rich from Lysandre, cause he would be seen using Pokémon, jk) Otherwise, I dunno. It in some aspects depends on how you view the games itself, and how it relates to real life beliefs, places, and all sorts. It was basically Lysandre's religion that, 'let's say there is a god, and he came to me and told me to try making a Pokemon free world, and I agreed, cause I liked the idea, and I want to achieve that.' Sorta like that. He sorta is following that 'God' that wanted him to do it. (Even though the god wasn't mentioned at all, that's still what I think)

I don't know, but hope this helped! - Matt

Hope I don't get down rated.

10
Are there any relations between the different “sagas” in Pokémon Special/Pokémon Adventures manga?
16
Are there any other uses for a Pokeball besides capturing and storing Pokemon?
23
Are there ever any animals featured that aren't Pokémon?
8
Are there any gyms in the Anime/Manga where the Pokemon trainer has to first fight other trainers?
10
Are there censored or discarded Pokemon creatures and what are the motives behind it?
5
Are Pokemon vegetarians?
2
Are items that are gained during evolution part of the Pokemon?
2
Which Pokemon are animal based?
6
Which Type combination still exist for which there are no pokemon?
14
Has the Master Ball failed at any point in the Pokemon anime?