What is gap moe?

Let's look at the meaning of the words separately.

A quick google search tells us that a gap is a space or interval; a break in continuity. It can also mean to be a difference. Here is a post that addresses what moe is. If I were to describe it myself, it is the feeling you get when you see someone/something so cute you just want to hug them and take them home.

Combining the two, gap moe is that irresistible feeling you get when there is a difference in the way someone/something acts and/or looks. When that character acts/looks out of character.

Further supported by this article:(Found this link on Henry Zhang's post. Thanks dude!)

Here is a discussion on MyAnimeList supporting this definition:

is when a character does something completely contradictory to what their usual habits/personality/character/appearence dictates.

AnimeSukiUser said
Yup, for the gap effect to work, you have to see the person in a completely different light that you never expect.

Pictures speak louder than words. So here are a few examples:

This is Tohsaka Rin from the Fate series, and a tsundere. Tsunderes are probably the most common example of gap moe. To put it simply, tsunderes are characters who act all tsun around the one they love. Then they suddenly act all dere. If you feel moe when a tsundere starts acting all deredere, THAT is gap moe. 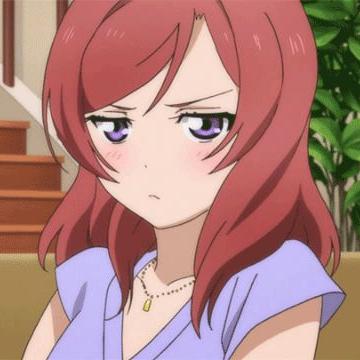 In Love Live!, Nishikino Maki is probably the most mature among the first years. However, she still believes in Santa! That gap between being mature and believing in something a child (and child at heart) would only believe, if you feel moe about that, THAT is gap moe.

A tomboy showing off feministic characteristics (Ex: Tsugumi from Nisekoi)
A tough guy who is actually a pacifist (Ex: Cromartie High School)
A stubborn perfectionist who finally admits defeat (Ex: Sasuke from Naruto)
A character that almost always dresses flashy but decides to dress normal (Kuroneko from Oreimo)

So tldr; Gap moe is that moe feeling you experience when a character acts and/or looks in a way that contradicts the way they usually do.

Another reason gap moe is used is because it allows the reader/viewer to see the character as more than just a one dimensional figure, as in reality it is entirely possible for people to be caught off guard by people who act differently than expected.

The contradiction, when handled properly, makes perfect sense as the story progresses because while it does SEEM contradictory, it makes sense in hindsight when the given character's story and personality is explored further.

This is because there is something behind that seemingly contradictory action performed that strikes an interest - which is to say a story. It is through this story that we are able to learn more.

Thus, gap moe is basically a product of a "hook, line, and sinker" that was executed to not only make a character attractive, but provides the writer a method of delving deeper into that character (as the reader/viewer's attention is piqued and thus is unlikely to quickly reject the writer's attempt at fleshing out the character).

Gap moe doesn't have to be all about what lies underneath, but as an interesting fact about that character.

Humans tend to think logically one way or another (which is why we are able to answer some questions without thinking too much or with little thought such as "what's your name", "what city are you from", "what's your favorite color', et cetera) and tend to try and find answers (some more than others) because it is the pursuit of finding the answer that interests us - and depending on the story, the end result is just as fascinating.

TL;DR Gap moe is a way of the author saying "here's something interesting about this character that is going to be fleshed out later on" or "here's an interesting fact" which generates interest as it makes the character more realistic.

To put it very simple, is commonly said when a character that is serious, or intimidant, or even ugly, does someone that is adorable or kind, and that makes them cute/moe, because its not something you expected from that character, both because their personality and appearance.

Not the answer you're looking for? Browse other questions tagged culture terminology .

63
What does 'moe' mean?
10
How does "The Disappearance of Nagato Yuki-chan" relate to the Haruhi Suzumiya series?
12
What are the characteristics of a "tsundere"?