Is the girl waiting at the train station in Spirited Away from Grave of the Fireflies?

Chihiro was traveling by train to the sixth station in Spirited Away (YouTube video). When the train passed the second station, there was a little girl waiting at the station. 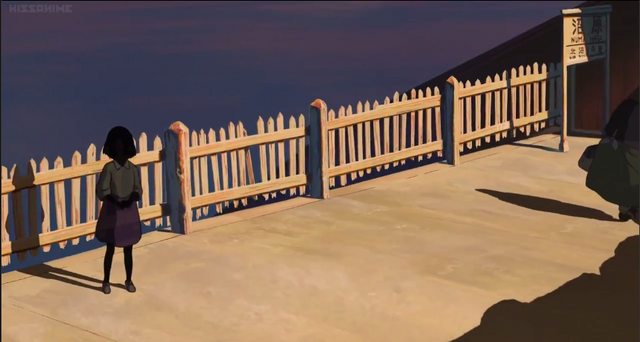 Out of curiosity, I visited Google for some hints and was surprised to see some people say that the little girl's name is Setsuko from Grave of the Fireflies. She was waiting for her older brother.

Is the girl waiting at the train station in Spirited Away, Setsuko from Grave of the Fireflies?

That aside, the girl at the station doesn't obviously look like Setsuko. Setsuko generally looks rather small and (slightly) chubby, in a very childish way. (After all, Setsuko is only four-years-old or so.) This is the case even at the end of the film, where Seita and Setsuko look over Kobe in spirit form: the characters look the same age as they were at their deaths. 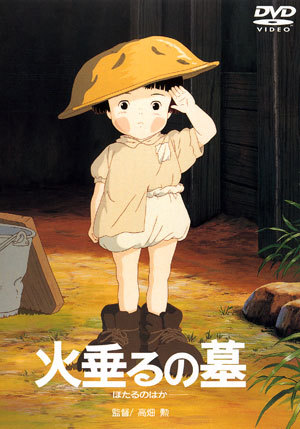 Meanwhile, the girl at the train station is somewhat taller and older in appearance. This girl also doesn't have Setsuko's hair (at least not overtly) and isn't wearing the sort of clothes we'd usually associate with Setsuko.

Absent such obvious markers, fan commentary, or any statements (e.g. in the form of art-book trivia) by the producers, I would conclude that this most likely isn't Setsuko.

I believe that it's Mei's sister from My Neighbor Totoro, Satsuki.

I've noticed the movies may be linked because it mentioned that Chihiro loses her pink shoe in the river, Satsuki finds a shoe in a river thinking it was Mei's when really it could've been Chihiro's from when she was drowning. She's also seen at a bus stop waiting with Totoro when their father is supposed to be on the train. 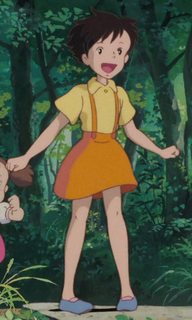 Spirited Away is a criticism of Japanese consumerism and the loss of personal integrity in compassion for others. Most of the spirits on the train are salarymen who had worked their lives away and who now are arriving at their afterlives with no one waiting to greet them. Following the interpretation of "My Neighbor Totoro" that Totoro is actually a children's spirit guide to the afterlife, I think this is Satsuki from that film, possibly waiting for the arrival of her father. The shoes that Satsuki found and that Chihiro lost also connect the films through water.

Not the answer you're looking for? Browse other questions tagged spirited-away .