Where and when Mugiwara Crew's new bounty poster taken?

After reading this question about why Sanji's bounty poster is drawn, not his real picture. I was just thinking about the bounty posters itself. I know that aside from Luffy, the rest of the crew's bounty posters are taken after Ennies Lobby arc.

But how about their bounty hunters picture after time skip? I know it's probably when they are in dressrosa, but if I saw Sanji's and Chopper's posters, it's seems that their posters are taken in Sabaody Island. And also Franky's bounty poster taken when he's in Punk Hazard or Fishman Island because it's shown his Franky Shogun, not his true face. He only used Franky Shogun at Punk Hazard when battle with Buffallo and Baby 5 and when he's battle Fishman Pirate at Fishman Island.

So, I want to know where and when Mugiwara Crew's new bounty posters were taken?

Like most other bounties in the series, I do not think that the location or the time at which the photo was clicked will ever be revealed in-universe, so here's what the new bounties make discernible:

Here is a picture of the bounties of the Straw Hats after time-skip for reference: 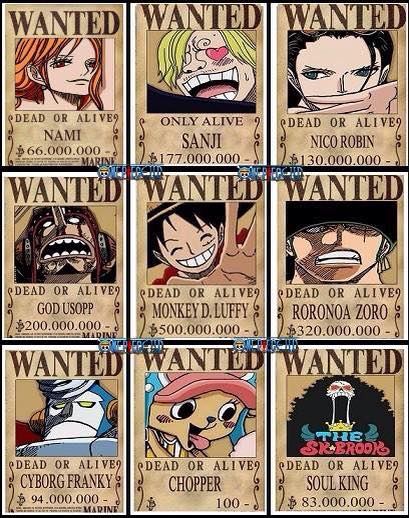 10
Why is Sanji's Wanted Poster drawn?

1
Where does Pica's body go when he uses his fruit?
6
Why were Luffy, Zoro, and Usopp surprised when they saw the Dragon from Punk Hazard?
6
How can I find out when new English Dubbed One Piece episodes will be released?
10
What are the similarities between Gol D. Roger and Monkey D. Luffy? Are they related by blood? What are their relatives' ages?
5
What happens when a Marine or Pirate goes after a bounty
4
When and How did Luffy get the Scar under his eye?
2
When and in which order should I watch One Piece movies?
9
Where and when does Franky say that Sanji is one of the strongest guys on the crew?
2
Have the Mugiwara pirates ever cashed in a Pirate for a bounty reward?
0
Why do Sanji and Smoker still need nicotine when not in their own bodies?