What technique is used to draw the lifelike backgrounds in the movie Ponyo?

In the movie Ponyo, the backgrounds (the clouds, pictured below) are not done in a typical anime style. Instead, they are much more lifelike and 3D. 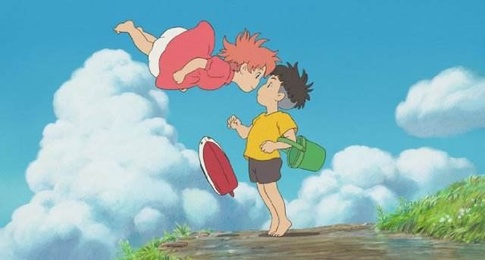 What is the technique used to do this? Is this used in other films or series?

Those are good old hand-drawn backgrounds. Here's a part of an interview with Suzuki Toshio, executive producer and former president of Studio Ghibli (emphasis mine):

During this decade CG [computer graphics, - singerofthefall] came up and we realized that it enables us to make expressions richer when using it as supplement of regular cel [sic!] animation. On the other hand a new problem appeared. The progress of computing tech is so fast that it isn't easy to catch up. If a movie at one point is made by the highest tech, it will become outdated soon. There is one more point. We tried CG on Howl’s. For example, the legs of the castle were made by CG. However, it didn't seem very natural to me and I told Miyazaki that his skill was better than that of a computer. He accepted it and quit using CG after that. Hence the latter half of Howl’s doesn't include any CG. We now know CG has both its plus and minus sides. So the theme of this movie is as the story: simple. The visual effects are simple as well, while on the other hand it needs very hard working because of the drawing all it by hand.

It is also mentioned here:

Miyazaki, whose films include "Princess Mononoke," "Howl's Moving Castle" and "My Neighbor Totoro," has used computer animation to embellish hand-drawn images. But before "Ponyo" went into production, he shut down the computer-graphics department at his Studio Ghibli, opting to work solely in hand-drawn images.

And finally, from this article:

He insisted he still uses a pencil to draw his animated characters and backgrounds: “Currently computer graphics are used a great deal,” he noted, “but it can be excessive. I think [animation] needs the pencil, needs man’s hands drawing.”

I would recommend you to check some of Makoto Shinkai's works (if you haven't seen them before) the quality of the animation and backgrounds there is stunning.

Update: There is an artbook called "The Art of Ponyo", which contains sketches hand-drawn by Miyazaki. I don't own it, but you can take a look at it's reviews here, here and here. The book includes both pencil and watercolor drawings, including characters, backgrounds, etc:

Usually I use poster paint to create the backgrounds; then I color the base in a pale color, adding subtle hues and shading on top of it. This time, with Ponyo, I added things like tints or detailed expressions with colored pencil on top of what I drew with poster paint...

Not the answer you're looking for? Browse other questions tagged anime-production ponyo or ask your own question.

3
How are backgrounds animated?

12
Are anime budget and worldwide gross data publicly available?
9
Are background and foreground delegated separately in anime production?
19
How was Aku no Hana's rotoscoping received by other animators?
28
How much does a typical anime episode or series cost to make?
18
What are the different colors in anime production drawings for?
5
What kind of animation/drawing style is used on K-On! Ura-on?
1
Does Manga Video still do films?
7
Anime reviewers refer to “art” and “animation” separately. What does each one refer to?
1
What are the machines used in Japan for hand-drawn animation?