Why does Kaneki's perception of taste change?

In the anime Tokyo Ghoul, Rize's organs are transplanted into Kaneki causing him to become a half-ghoul half-human. However, the organs transplanted are situated in his abdomen region and his tongue remains the same.

Later, we see the ghoul researcher Ogura Hisashi say that ghouls cannot digest human food due to a particular enzyme in their body and because their tongues have a different structure, food tastes different to them. However, Kaneki's tongue had remained unaltered so he should have been able to eat and taste human food but not be able to digest them. 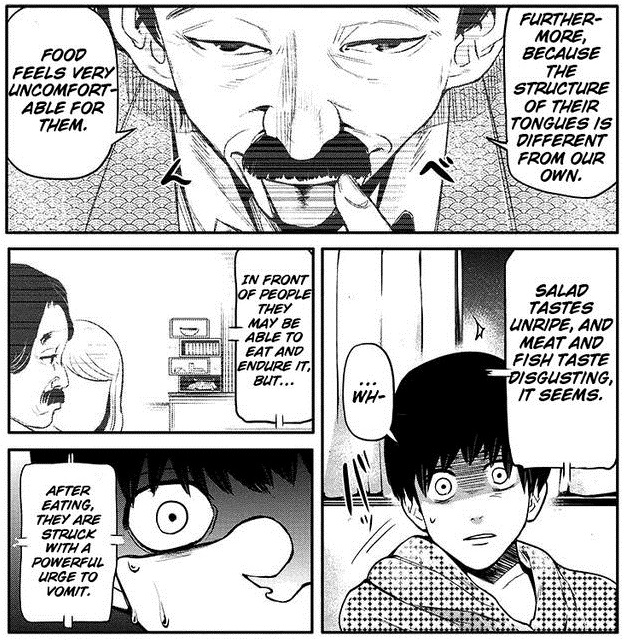 Inspite of this, we see Kaneki say that food tastes bad to him and he uses adjectives such as ash to describe the taste. My question is, even though his tongue is unchanged, why is he unable to taste human food?

This Reddit thread partially answers the question. However, most of them were guesses and I didn't find them satisfactory. The highest upvoted answer goes against the show (tongue does not change.)

I've only watched the 2 seasons of the anime, so I request you to keep the answer as spoiler-free as possible.
tokyo-ghoul
Share
Improve this question
asked Feb 15 '16 at 10:08

The ghoul DNA "infected" his whole body (look at his eyes) so it´s not too far fetched it changed the tongue as well.

Apart from physical change there is also a mental change. There is a phenomenon where patients who obtained an organ transplant notice effects on what they like or dislike, e.g. if the donor was a pianist the patient might like listening to piano more than before or even want to learn it. Kaneki's tongue could still have the same structure as before but different associations to food based on his digestive system.

It is noteworthy that the Kagune Sac is the primary source of RC Cell manipulation and such for a Ghoul. Much like certain glands in the human body control Hormones for the entire body, the Kagune Sac does so for RC Cells in a Ghoul, as well as giving them their Kagune, and depending on where it is, it even determines which of the 4 kind of kagune they get. It is clear the Kagune Sac is a control organ from that, and it probably can not only deal with RC cells, but also release other Things into the entire body. It would not be out of the ordinary if these things could also affect the rest of his body. It could have created and spread these Ghoul Hormones and other chemicals through the blood which gave him his other ghoul traits, like the Ghoul eye, regenerative ability, and reinforced his body's Strength and toughness with the RC Cells he now has an abundance of. So of course it could also hit his tongue and brain to alter not only his taste buds but how his brain interprets the signals, as well as his stomach to not digest other food properly. All of this is not actually described anywhere in the manga, and is just a guess, But the Kagune Sac is not some normal organ. Hormones can change a lot about a human already, just look at Testosterone and Estrogen. If the Kagune sac also creates Ghoul Hormones, they could easily affect a human, since Ghouls are Basically humans in almost every other way, and the 2 can reproduce together to create natural One eyed Ghouls, meaning scientifically, they are very close on the Family tree.

I have heard of a fun Fan theory that the Kagune was originally a Parasite that formed a symbiotic relationship with its human hosts. The source is probably from the fact that the Kagune sac is one of the only differences between Ghouls and Humans, and Kaneki receiving a sac gave him every other trait of a ghoul.