How does element dominance work in Avatar? 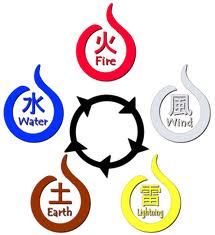 Even though I learnt this concept from the Naruto series, it really makes sense:

Following this logic, why can't waterbenders beat firebenders in Avatar (The Last Airbender)?

I also noticed that Aang himself, who is an airbender, could defend against firebending with his airbending skills. (note that I am referring to those earlier episodes when he was just an airbender (season: 1, episode: 1-5))

How does it work in Avatar? Which elements dominate over each other?

Additional Info:
few assumptions work in (Naruto) ninja world, that I didn't consider to include in the question because the question is actually focused on AVATAR not NARUTO

It works a bit differently in Avatar.

Firebenders draw they power from great sources of fire. The sun is usually the strongest one around (with the exception of Sozin's comet, when it arrives every 100 years). Water benders draw their power from the moon.

Also, there seem to have been a lot more fire benders than there were water benders (also, the water benders were separated into two very faraway clans).

There's no obvious elemental dominance in the show. I depends more on the bender's ability than what they bend. There are a few things that could change their ability, such as the presence of the sun and moon for firebenders and waterbenders respectively.

5
Who was the first avatar?
3
Why can Korra bend 3 elements from the beginning?
23
Is avatar Korra bisexual?
2
Why are there new airbenders in Avatar?
2
Who is the Earth Bender in the OP?
4
Can the Avatar still be reincarnated?
2
Why does the Avatar Cycle go Fire, Wind, Water and Earth?
4
What happend to Zuko's Mother (Avatar the last airbender)