Nostalgia Hit Me - But What Anime Is This That Takes Place In An Alternate World That Is Mostly Deserts? [closed]

So, nostalgia kind of hit me with a force of a thousand suns and I can't stop my brain from remembering anime I've watched when I was a kid. I've pretty much remembered 90% of what I've seen, but this one anime my brain keeps taunting me with, I just can't recall.

The things I remember about this anime is the fact that kids had been transported to another world. The reason for this I can't remember exactly, but it had to do with searching for a specific type of girl.

I remember a boy and a girl being sucked up in that world. The boy in another part of that alternate world, I think knew kendo since I remember him calling out "men" when he was ordered to plow a field. I also remember a scene which had him stuck in a hole and someone threw his gruel of food in the floor. He still ate it even when it was mixed with the earth so he can keep his strength.

The girl I remember because of her circumstance. She was taken to that alternate world because she was mistaken for the girl people were searching for. I remember her being given to men in their army when they realized she was not. She was traumatized after an encounter with a large bulky army soldier while another soldier seemed to fall in love with her.

There was a desert setting (and I think most of the world was desert?) as I remember the girl wading through sand when she escaped. She was hoping to die there in the desert, but someone found her. Later, she finds that she is pregnant and at the end she meets the man who fell for her. He saved her in the end, but I can't remember how or from what.

I saw this anime in AXN and I think it was either a movie or an OVA (because I can't remember seeing a lot of episodes of it at all). It was in my early years, so it may range from 1998-2004.

Anyway, that's all that I can recall.

It would be much help if anyone can figure out what anime this is.

Now and Then, Here and There 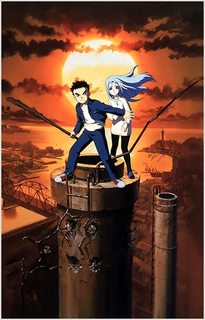 Our protagonist, Shuu, isn't very adept at kendo as he only knows how to charge at his opponent and face them straight on. He accidentally gets transported with Lala-Ru (pictured above) and her pursuers to an alternate world that is mostly deserts. Lala-Ru is much sought after in this desolate world for her powers; previously, Hamdo's soldiers mistook Sara for Lala-Ru and abducted her to this world also. Let's just say Sara has to bear with much hardship and eventually

bear a child of a rapist.

Not the answer you're looking for? Browse other questions tagged ima-soko-ni-iru-boku or ask your own question.