Asking a ninja to hide in the ceiling and get pierced by a spear?

In One Piece, Chapter 817: Raizou of the Mist, there's a scene right after Luffy and his crew first encounter Raizou, where they all start asking him to perform some stereotypical ninja techniques.

In this scene, many different characters have requests that mostly parallel Naruto and old Japanese lore, seen in this panel: 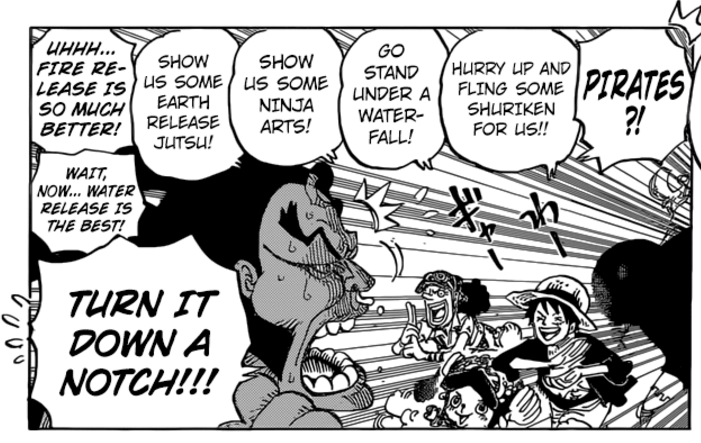 Zoro asks for a different request, asking that the ninja "hide in the ceiling and get pierced by a spear".

This is the part I'm most confused about; what kind of reference is Zoro making when he asks for the ninja to hide in the ceiling and get pierced by a spear?

This is a common trope in period dramas involving samurais and ninjas.

You see, when ninjas hide under floors or in attics, they need to be wary of spears and swords from samurai. It's routine in many dramas to stab the ceiling and walls to check for concealed ninja. If you stab and get blood, you got your ninja.

A very well-known story is of a figure called 穴九右衛門 ("Hole" Kuemon). Kuemon was a ninja sent to assassinate the Lord of a castle. In the process of infiltrating, he got stabbed in the head by a spear and almost got caught. However, he was able to lie still, wipe the blood off, and await another opportunity. Eventually, he succeeded and he returned with a scar on his head, earning him the moniker "穴" (hole).

8
Why does Chopper hide himself the wrong way?
1
How did the shipwright Tom get the blueprints to the Pluton?
0
How did Flamingo get the Mera Mera no mi?
0
How did Jora get inside of the birdcage?
4
If the government wants to hide what happened during the void history why won't they just destroy the Poneglyph stone instead?
5
How did Luffy get the scar on his chest?
4
When and How did Luffy get the Scar under his eye?
5
How did Trafalgar Law get to and leave Marineford?
3
Did Luffy travel the same path that Roger took to get into Raftel?
0
Why doesn't Otohime need a bubble to get around in the country?