Why are there omissions and discrepancies in Kaori's Kreutzer performance?

In ep. 2, the entrants to the competition are shown playing extracts from the first movement of Beethoven's sonata no. 9 (often referred to as the Kreutzer). This is most likely the only movement played, given the portrayal of Kaori's performance and the length of the Kreutzer.

It would not be appropriate to show a performance of the entire movement. (It could bore viewers, and it could easily take up half the episode.) We can thus justify an abridgement of the piece or the removal of some of sections. The omissions I have found so far, however, do not make sense.

This leaves me with the following question. Is there any suggestion that the movement is actually being played with these omissions and discrepancies in-universe? If so, why would this be the case? Are these instead just badly executed (in that they are misleading) cuts? After all:

As requested, while this is not a conclusive answer, we might never know unless there is more information released.

The manga only specifies the piece, but never details the performances of the characters musically. The characters might gush over how "lively" or "beautiful" it sounds, but nobody ever talks in technical terms, much less describe sections of music.

Chapter 6 page 30-32 : The extent of description of Kaori's Performance. 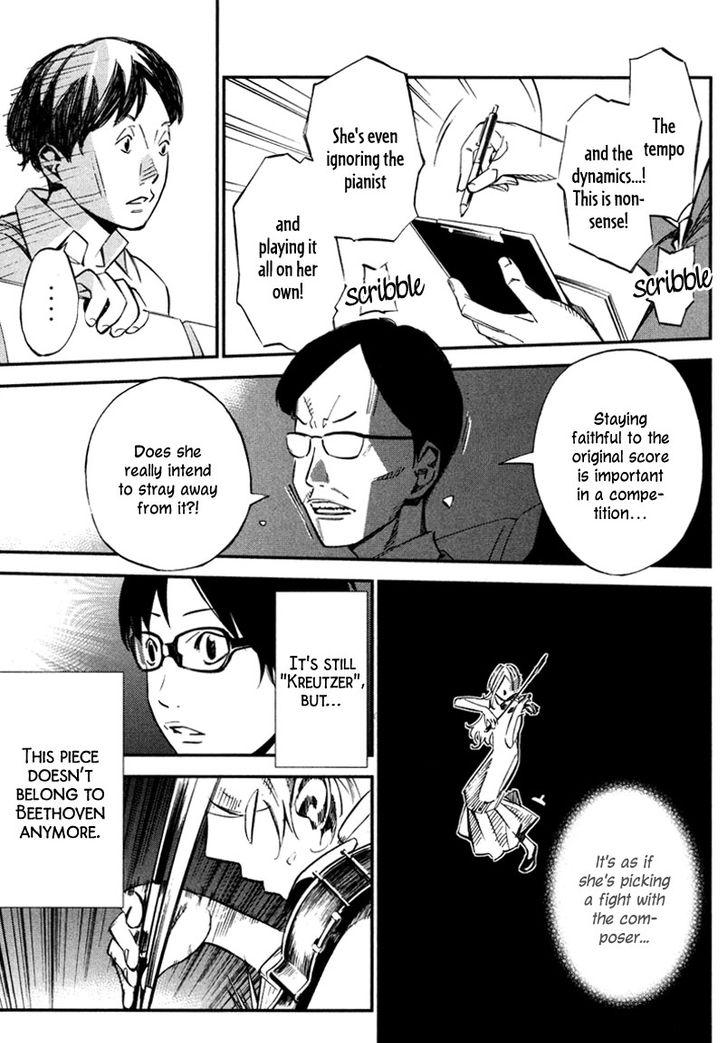 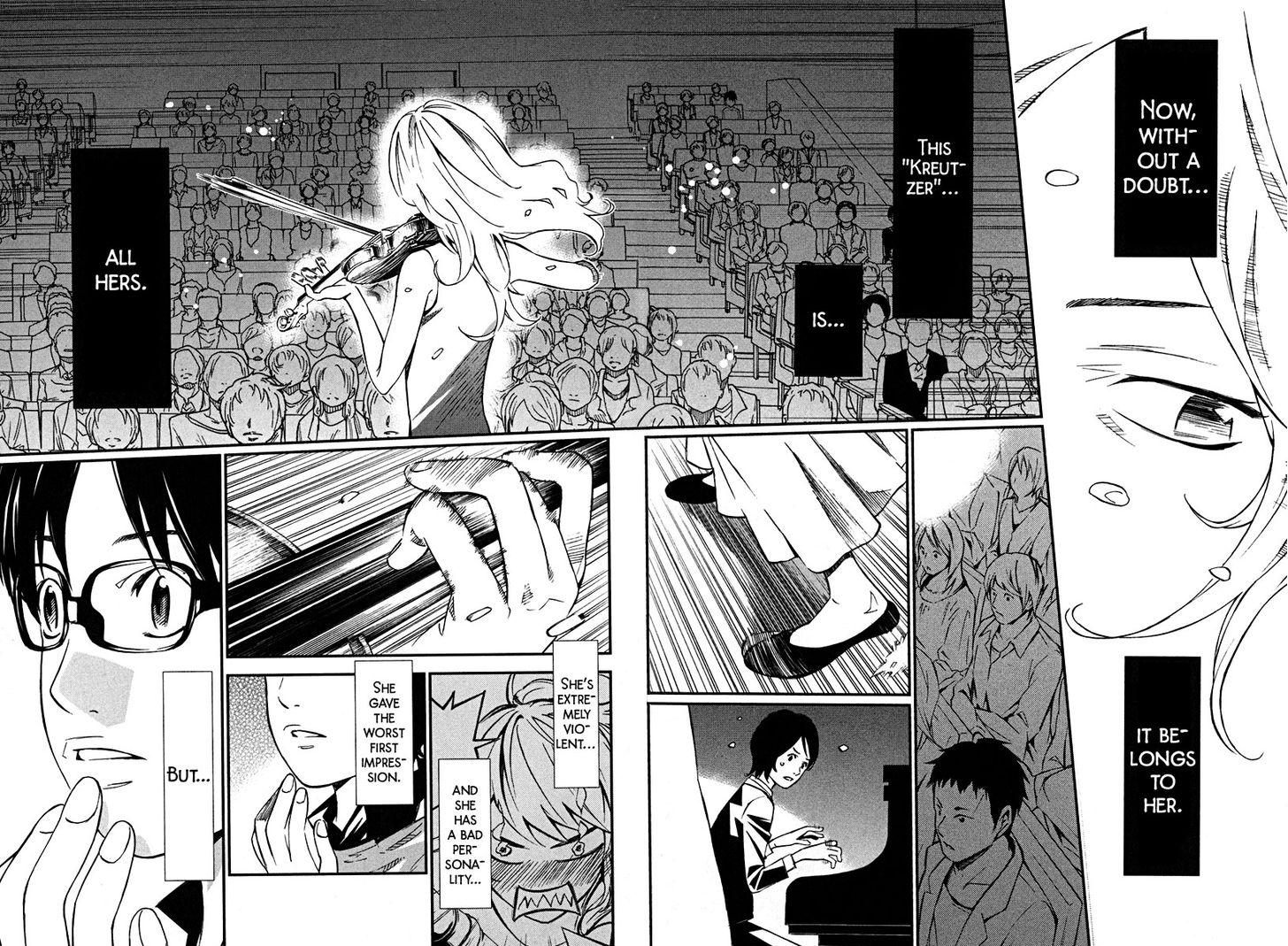 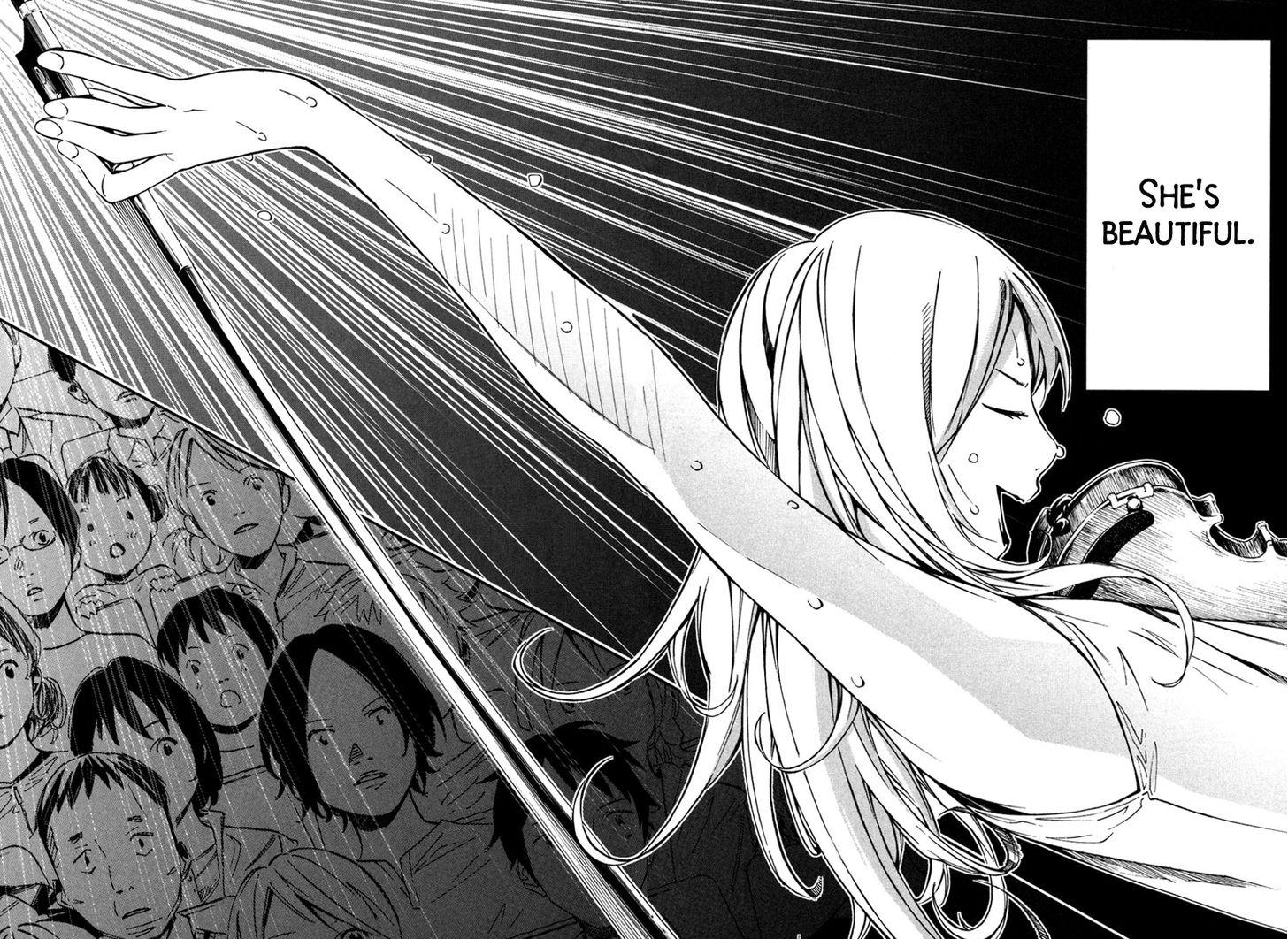 Thus, we can conclude that your observations about the discrepancies in the musical pieces stem solely from the anime production. There could have been artistic/directional decisions for the eventual editing of the said pieces, such as time constraints or perhaps wanting to get a feeling across because that section or piece of music only fits that part. We might not know more unless more information is released (AFAIK) from the studio, such as interviews with the director/staff.

However, this stand does not exclude the author collaborating with the studio and affecting the said pieces. It could well be what the author had intended to portray in the first place. Again, we do not know the extent to which he has influence over the production, notwithstanding that the plot of the anime is pretty filial to the manga.

In my opinion, the "cuts" as you describe are not noticed by the general audience, and serve more as a mood setter and a plot driver than an actual portrayal of a performance. Only a more discerning and a informed listener would be able to tell that there was something amiss.

She purposely jumped to different parts of the song - not to make it shorter - but to instead show us that she will play the music the way she wants to. (This is stated in her letter to Kousei.) She is a very intense person and this is shown through her performance by her playing the intense parts of the piece. (I also think that she may have avoided the slower and calmer parts of the song because slow/calm music can be associated with the sadness that she secretly feels about her illness) Kaori plays the upbeat and loud/exiting parts of Kreutzer because she wants to portray the loud and exiting parts of herself and not show her vulnerable side.

Not the answer you're looking for? Browse other questions tagged your-lie-in-april .

7
Are manga artists really pressured by the editors not to put dangerous or illegal scenes in their works?
7
Are Watari and Kaori a couple by the time she is hospitalized after missing the gala violin concert?
9
Why couldn't Kousei hear himself play?
3
Why wasn't Kaori Miyazono famous?
2
Is there a recording of Chopin's "Winter Wind" with the drums added, as heard in Your Lie In April?