What is the contract between Calcifer and Howl?

In Howl's moving castle, there's a fire demon named Calcifer who heats the wizard Howl's hearth. He tells Sophie that he has a contract with Howl which binds him to the hearth. He also says that he'd help Sophie if she broke the contract between him and Howl.

What exactly is the contract between Calcifer and Howl? What's the source of this contract?

As stated on his MyAnimeList page:

Calcifer is a fallen star who was caught by Howl. He didn't want to die, so he struck a deal with the wizard. Calcifer got Howl's heart and a prolonged life, and Howl received full access to all of Calcifer's considerable powers.

As it turns out, neither of them liked it after a while, but it couldn't be broken by people who were part of the contract. When Sophie Hatter comes to Howl's moving castle, Calcifer recognizes that she is under a curse thanks to the Witch of Waste and that Sophie has considerable powers of her own of which she is unaware. To break his own curse, Calcifer offers to lift the curse placed on Sophie once she manages to break Calcifer's contract with Howl.

Clacifer is also bound to the hearth, and cannot leave it because of the contract. He also can not explicitly talk about the contract, so he instead gives Sophie hints about it when she agrees to help him break the contract. 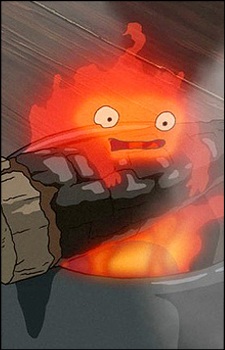 Not the answer you're looking for? Browse other questions tagged howls-moving-castle .

14
What happened to Sophie's curse?
4
Why is the hair of Howl was colored black when he was young?
1
What is the age of The Witch of the Waste in Howl's Moving Castle?