Why does it take so long for the translated version of tankoubon volumes to be released?

As far as I know, the English versions of tankoubon volumes for most manga series seem to be released within several months, if not years, of their original release in Japanese.

Even very popular mainstream series like Naruto and Fairy Tail have their English tankoubon counter-parts released months after their initial Japanese release.

Why is this the case?

If you consider the time it takes for subbed anime to be released, or even the (legal) translation of individual manga chapters done by companies like Crunchyroll or Shonen Jump, which happens on the order of days from the initial Japanese release, it doesn't make much sense to me that releasing an English translation of tankoubon volumes would take so long, especially in the case of individual translation of the chapters, since all the companies would have to do is just compile them together.

I got the answer but it's in the Indonesian languange and it's from an Indonesian publisher's perspective. Feel free to edit and improve my answer.

Elex Media is one of the most popular publisher companies for a manga/manhwa in Indonesia who licensed many popular manga series for decades such as Naruto, Doraemon, One piece, Toriko, Hayate no Gotoku and many others. Elex Media has a discussion forum which allows manga reader/enthusiasts in Indonesia who want to see the progress of the manga that would be sold in Indonesia (planned/on-going/etc).

The admin who took control of the forum is also the editor who works for Elex Media, that means, the answer that are all in in this discussion website are mostly a fact. Apparently, the admin always got the same question from users, similar to:

When will Manga B available in bookstores?

Why did Manga C take forever to have a next volume ? It's been years since the last volume (e.g D-Grayman, Katekyo Hitman)

Why didn't Manga B that "was" popular back in Japan get licensed yet? It's been 10 years since Japan had published this manga.

So they made a FAQ page for answers to all of those similar questions. Some of them are able to answer the OP's question.

PS: Never compare with mangascan that circulated ILLEGAL on the internet because

(1) Illegal means without a permit process, obviously faster than the legal sources.

(2) Mangascan (illegal sources) is the usual source of comic magazines, not tankoubon (see paragraph 3 above on the length of the process from comic magazine to tankoubon).

New comics can be confirmed as soon as they get their license from the original publishers.

QI.01: When does Manga A release in Indonesia?

A : If it is not listed in the weekly schedule (Forum or Blog), it means that it is still in process, either in Japan (in its comic artist / Japanese publisher) or in Indonesia, therefore the exact date can not be accurately informed. 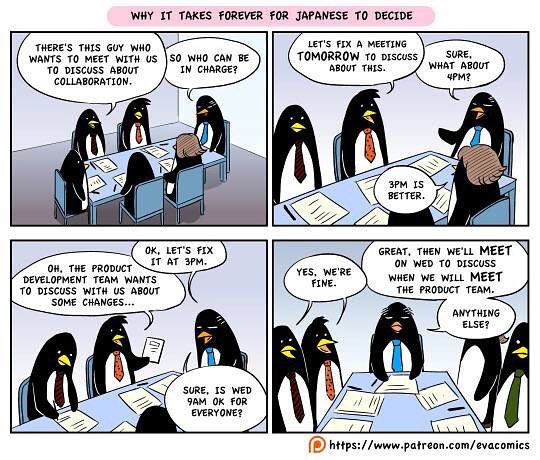 Explanation about the relevant image : Why it takes forever for Japanese to decide: This is based on true story from my Japanese friend, that they need meetings to discuss when to hold the next meeting! Consensus from everyone is important but this delays making decisions..."

The process of publishing comics is relatively long because many of the processes require the approval of the original publishers, either from the process for each chapter. in Japanese comic magazines or tankoubon forms (comic units), especially if the comics are published in "Comic Magazine, Indonesia version", then the process will be a little longer ( In indonesia, the title that "soon" would be licensed were included in Comics Magazine. Indonesia have their own comic magazine that published once a month. The content of this comic magazine were a bunch collection of many manga title that appear one chapter only per one comic magazine ). (This is why it's sometimes informed that the title pauses are published in Japan, to illustrate the density of comic and publisher activity against the title).

In Japan itself has a break between the volume, normally an average of 4-8 months, sometimes more. Depending on this series how many pages per chapter are published in Japanese comic magazines and depending on the Japanese comic magazine is published weekly, biweekly or monthly. If 1 chapter of 32 pages and 1 comic takes approximately 200 pages, then 1 tanko (short for tankoubon / comic unit) takes 6 chapters. If 1 comic magazine only published 1 chapter / month, then at least 6 months new enough material collected for tankobon version; and the fastest 1.5 months if the magazine is published weekly. And remember, that if 1 chapter 32 pages, there are some comics that the number of pages less than that.

Then after that, this material will be their new process of licensed as a tankobon in Japan. Note that This new comic status in Japan are currently on-going manga series

Trivia 1: Do you know that there is a publisher requesting to submit approval repeatedly simply because the comic-panel retouch should be done in such a way that it should not be about the objects they specify a semilimeter?

In Indonesia, after the Japanese tankobon is issued, the raw material is sent to Indonesia and then still processed here, including the process of permitting the contents to be printed which must get Japanese permit every volume (which is the MOST LONG process, ie waiting for the print / approval of contents & cover from Japan). Because once the permit is there, all will be done smoothly, Elex Media just takes 2-3 weeks process and your favorite comics are already spread nationwide to all bookstores.

Trivia 2: Do you know that there is a publisher who can request to submit approval repeatedly only for color control of only one certain illustration image?

In addition, the Japanese publisher representative agency and the responsible editors in Indonesia do not only handle the 1 title or 1 publisher only, but there are so many other series & publishers handled. So the handling of manuscripts and the preparation of the published schedule also lapse with other series. Elex publishes 50-90 titles each week, just imagine .. more than 200 titles are published every month! ^^

Trivia 3: Do you know that there are editors who have to outline around every single comic strip, just to check the comic edges should be a distance of a certain millimeter size, so that the results can meet the standards of one of the Japanese publishers?

Sometimes there are also comics that are stagnant in Japan itself for one reason or another, for example a vacuum comic for research (such as Naruto, One Piece, etc.), comic artist / injury (such as Crayon Shinchan, Princess, etc.), internal problems (such as Topeng Glass, etc.) and so on.

For the western Audience, they have discussed on this thread (Indonesian language).

Anon: ... let alone see a neighboring country that can release the latest one piece volume in just 2 months after japan releases its latest volume, with price below 20 thousand rupiah and thicker paper which somehow how

for this one seems to have been discussed on the previous page. The greatest possibility can be analyzed from this thread. There it is seen that in Indonesia, either because of online pirated read prefer or what, the sale of the results received by the Japanese publishers to the OP (One piece) as a condition of publication is not as good as in other countries. In the thread it's even clear OP does not even reach his 1/2 of Naruto's report card and is still far behind compared to Detective Conan's report card.

The usual practice is that the better his report card (after being sent to Yen, so the exchange rate also affects), the fair is increasingly prioritized in Japan. So if you compare the other titles with other publishers that you call, it would be much the opposite is also the titles in Elex licensed is faster than other country.

It is also possible that in other countries, the comic title published by the publisher is not as massive as Elex, which currently publishes about 15,000 comics with its current cycle of about 100-150 comics every month. If the info on this website, the number of titles dealt by the publisher is much less (only 8.5% of Elex) so reasonable that the bureaucracy, the total title held by the editor, and the process at the publisher is slimmer, a little queue.

FYI if before the permit process, there are many other processes that must be passed such as the process of payment of royalties, taxes, sales proceeds, delivery of materials, etc., where the process is not all per title but there are per batch. :D

For example the process of permission of comic title I can not be processed because waiting process X which processed in batch Y along with title of comics II, III, IV, etc which still queue up in other process.

Not the answer you're looking for? Browse other questions tagged manga-production .

1
How much time does it take to translate a manga volume/tankobon?
4
How is it that Scanlations are still faster than Licensed releases?

3
Why are there no online stores that sell manga in PDF format for the English translation?
2
Why does the Shield Hero manga have the qualifier "The Manga Companion"?
5
Why has a new chapter of ŌĆśNichijouŌĆÖ been released when the serialization ended in 2015?