At the end of Bakemonogatari episode 2, Araragi claimed his normal weight is supposed to be 55kgs, but on the weighing scale, it showed 100kgs. He then said something about the crab and the episode ended. There was no sign as to what happened to the weight difference in the entire series.

I've only watched Bakemonogatari, so is there an explanation or something in the later series? Or the anime has mistaken it or ignored the fact of Araragi overweight?

I have watched all of the Monogatari series until the one before Owarimonogatari. I can tell you that Araragi's weight difference in episode 2 was never mentioned again. Throughout the entire series, only a few of the episodes (or maybe just one episode, not sure, it's a very long series) mentioned about the crab but only very briefly, didn't even talk about the weight problem.

That said, I don't think the anime made a mistake or ignored that fact. This is just how the Monogatari series is by nature. It tends to leave some stuff open-ended in kind of a humorous way. Though I watched back that episode and in the end, it did say that the reason for his weight increase was because the God was careless (as they don't really care about human's emotions, etc). 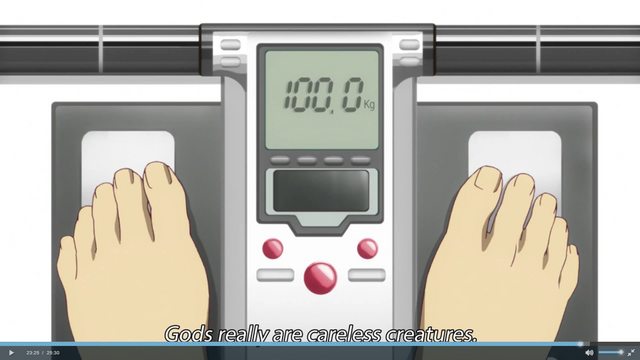 The words have a dual meaning.

In the case of Senjougahara, when they talk about the problem of weight and feeling, it is interesting because in Japanese, omoi means "weight" and "feeling" at the same time.

About Araragi, that new weight that he won is a metaphor for his new feeling for Senjougahara.

Actually, in Nisemonogatari ep. 09 (Tsukihi Phoenix arc), there is a scene where Araragi and Karen-chan play Janken, and when Karen-chan loses, she has to carry Araragi on shoulders as a punishment. You can see that he feels uncomfortable by knowing his weight and doesn't want to let Karen-chan know.

Originally was going to be a comment on @Euzones' answer, but it may fit better as an answer of its own.

In Nisemonogatari episode 9, Araragi states that he weighs 56kg. The extra kilogram could be some kind of residual effect, entirely natural, or a somewhat silly lie.

Although he attempted to back out of riding on Karen's shoulders on the pretense of having gained weight from "studying too much", he was quite enthusiastic about this only ten seconds prior, with his second thoughts coming after she squatted down in order to pick him up. In light of the director's choices of camera angle, the events of the previous episode, and her later complaint of such, it seems likely that his hesitance is instead because he has suddenly gained an erection which he would prefer not to press against the back of her head. (Perhaps the light novel could clarify this?)

When he does run out of excuses, he awkwardly proceeds to willingly mount her, which would contradict his ongoing concern with protecting his sisters from knowledge of aberrations if he were exceptionally heavy.

In conclusion, at that point he no longer bore most if any of the extra weight.

It’s one of those things he’s just living with. A metaphor come to life or like in jujutsu kaisen patch face says the body is actually shaped by the soul. I honestly love it, I’m doing a rewatch and just tugging all heartstrings.

4
About Hanekawa, Golden weeks and possession occurences
2
How was Kanbaru's contract made void?
7
Why does Hanekawa know about Black Hanekawa?
4
What dance is Araragi dancing?
6
When did Shinobu enter Araragi's shadow in Tsubasa Cat?
9
What is the Evangelion reference Araragi was talking about?
21
Why does Mayoi get embarrassed about this tongue twister?
2
What did Oshino Ougi signify?
2
In the Monogatari series, who is Araragi's true love? Hanekawa, Shinobu, or Senjougahara?