In the episode The Puppetmaster when Katara learns that Hama was responsible for the disappearance of people during a full moon Hama then goes to control Katara with Bloodbending.

Short after forcing Katara to her knees she is able to get back up on her own and fight back showing no sort of resistance or strain as if Hama was no longer controlling her.

It wasn't like Hama couldn't Bloodbend because she controlled Sokka and Aang later on and it's not that she can't control someone bending because Katara stopped her forcing Sokka killing Aang by taking control of her body.

So why wasn't Hama controlling Katara and instead allowed her to fight?

If we analyse the episode,

Hama isn't actually fighting but rather forcing Katara to willingly use bloodbending.

Hama only attacked Katara because Katara refused to learn the art of Bloodbending. She was horrified to learn the technique and by the idea of controlling another person's body.

In Avatar Wikia, Bloodbending is stated as:

a sub-skill of waterbending which allows a waterbender to hydrokinetically take hold of and manipulate the various fluids within an organism's body. This technique is referred to as the darkest, most powerful, and most feared of all bending techniques and is the only art known to endanger the user's mental state.

Going Back to the Episode "The Puppet Master"

They Meet an old woman in an Inn named Hama which then teaches katara the Southern style waterbending and also a series of techniques in order to obtain water in places devoid of any obvious water sources. 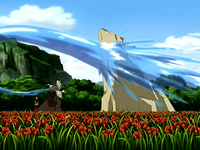 Following her demonstration, Hama offered to teach Katara a powerful technique that was only possible during the full moon. When Katara expressed hesitance due to the rumors of disappearances, Hama reassured her that two master waterbenders under a full moon should be able to handle anything.

That night, Hama led Katara into the forest and told her about bloodbending and its ability to control another living organism. Horrified by the idea of controlling another person's body, Katara refused to learn bloodbending. Hama argued with her, stating that it did not matter whether she wanted to learn it or not, because the power to use it existed either way. For trying to wipe out their entire culture, Hama extolled that they must have vengeance upon the Fire Nation. This outburst led Katara to realize that Hama had been causing the villagers to disappear, but the latter angrily stated that the people of the Fire Nation deserved the same treatment that they had given to her and all the southern waterbenders. Hearing this caused Katara to adamantly refuse to learn bloodbending and to try to stop Hama from further terrorizing the town.

Hama used bloodbending against Katara to temporarily force her into submission

"They threw me in prison to rot, along with my brothers and sisters! They deserve the same! You must carry on my work." — Hama to Katara.

Katara soon regains control of her body, reminding Hama that she too draws power from the moon, and is powerful enough to overcome Hama's technique. The two begin to battle, each drawing water from the grass and trees surrounding them, but it quickly becomes obvious that Katara is the superior combatant. Hama's bloodbending is useless on her. 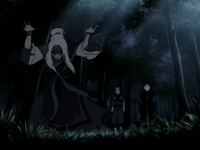 When Katara appears on the cusp of victory, Aang and Sokka arrive to assist her—and succeed in doing little more than providing Hama with an advantage, as she uses bloodbending to control them like puppets to attack Katara. Katara evades their attacks and manages to freeze both Aang and Sokka to two separate trees to stop them, but this proves to be only a temporary solution. Hama frees them both and resorts to sending them flying at each other, with Sokka's sword pointing straight at Aang. At the last second, Katara desperately uses bloodbending to subdue Hama and protect Aang. 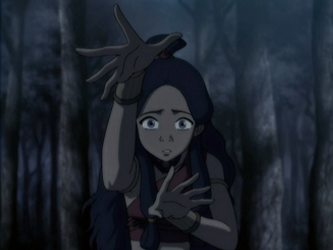 Hama remarked that her work was done, as Katara had already willingly used and mastered bloodbending. She laughed maniacally as she was dragged off, leaving Katara in tears.

Hama surrendered herself knowing that she had now passed her technique bloodbending onto another waterbender from the same tribe (Southern water Tribe) which is Katara.

We can Infer that Hama isn't actually fighting Katara but rather forcibly teaching her to use Bloodbending and to pass her art onto another waterbender, which is against her will.

here is a review on the The Puppetmaster from IGN

Great aspect of this episode was Hama's origin story, which we saw through flashbacks. In addition to showing us how she (Hama) was captured by the Fire Nation and later developed bloodbending, it also did a good job of making her a sympathetic character. While her actions were clearly out of line -- namely, kidnapping innocent Fire Nation civilians -- you could understand where she was coming from after being locked away for so many years. She even made some good points about the morality of bloodbending and how using it was not a choice but a necessity: "The power exists, and it is your duty to use the gifts you've been given to win this war."

Of course, the highlight of this episode was the final showdown between Hama and Katara, which dovetailed nicely with Aang, Toph and Sokka's investigation into the "Full Moon spirit." But I think [the part where] Hama was demonstrating her bloodbending on Katara, and Katara rising above it adding, "You're not the only one who draws power from the Moon." This, followed by Katara's own mastery of waterbending, which far exceeded Hama's amateur skill level. Regardless, Hama accomplished her mission -- to pass on the art of bloodbending to another waterbender -- thus concluding the episode on a noticeably dark note.

Once Katara understood the technique, Hama would have to overpower her to control her. Others who don't know the technique, they're easy puppets. Hama just wanted to force Katara to bloodbend regardless of how she accomplishes it.

I imagine it is a battle of focus and skill. It is much harder to combat someone who has similar abilities because they can nullify it. Aang can water bend but isn't a master like Katara, nor does he know about bloodbending. So controlling him and Sokka, a non-bender, is easier than controlling Katara. And when you throw actual combat in, it should be even harder to keep full control.

You also have to take into account power level. Katara is young, Hama is not. Even if they are both knowledgeable, Katara has a general advantage. Hama can only bloodbend when the full moon is out and has to draw power from it. Once Katara decides to draw power from the moon as well, Hama is no longer able to control her.

Sokka doesn't draw power from the moon. Aang may, but it's likely not as influential as Katara.

EDIT: Since it people need more proof that Katara couldn't be overpowered, here's a quote from the episode.

You're not the only one who draws power from the moon! [Assumes a fighting stance.] My bending is more powerful than yours, Hama. Your technique is useless on me!

Katara understands the technique and can overpower Hama. So Hama can't bloodbend her, but can still target others.

Hey remember me? well in the avatar wiki it was stated that blood bending is useless when applied to people who also know blood bending.(Link http://avatar.wikia.com/wiki/Bloodbending#Limits ) this is from the page: Bloodbending seems useless when applied to a fellow waterbender of the same caliber, if not superior, to the user. that's the answer to your question and there is a lot more info about blood benders on the page.

3
Why can Korra bend 3 elements from the beginning?
1
Why doesn't Korra bend the metal on Kuvira's uniform?
2
Why are there new airbenders in Avatar?
4
Can the Avatar still be reincarnated?
2
Why does the Avatar Cycle go Fire, Wind, Water and Earth?
3
Why is creating massive water spouts/flames/rock formations/gusts of wind a sign of mastery?