I was reading a scanlation of the Evangelion manga and noticed that Toji consistently uses a lot of "informal"-sounding speech. I chalked this up to poor translation quality — I tend to find this sort of thing distracting — but when I read a licensed translation to English, I saw similar language. For example, from ch. 20: "Ikari! Yer not allowed ta look!"

Later, Asuka accidentally provokes someone at the arcade. Someone, possibly Suzuhara, tells Toji to talk to the angered man because both have the same "accent". Thus, it seems unlikely that Toji's language is similar to, for example, Shinji's, when he asks Toji "Whadda mean?" after being asked about his exchange with Rei in the same chapter. In other words, it does not sound like Toji's habits fall within the "normal" bounds of variation in how people are supposed to talk.

What is this "accent"? What is Toji's language supposed to correspond to in the Japanese original?

According to this quite old Ask John column (or the Google cache of it, since the original page seems to have gone offline), Touji's accent in Japanese is Osaka-ben. Eva wiki and TV Tropes corroborate this.

In case the cache of the Ask John page disappears, here's a screenshot of it: 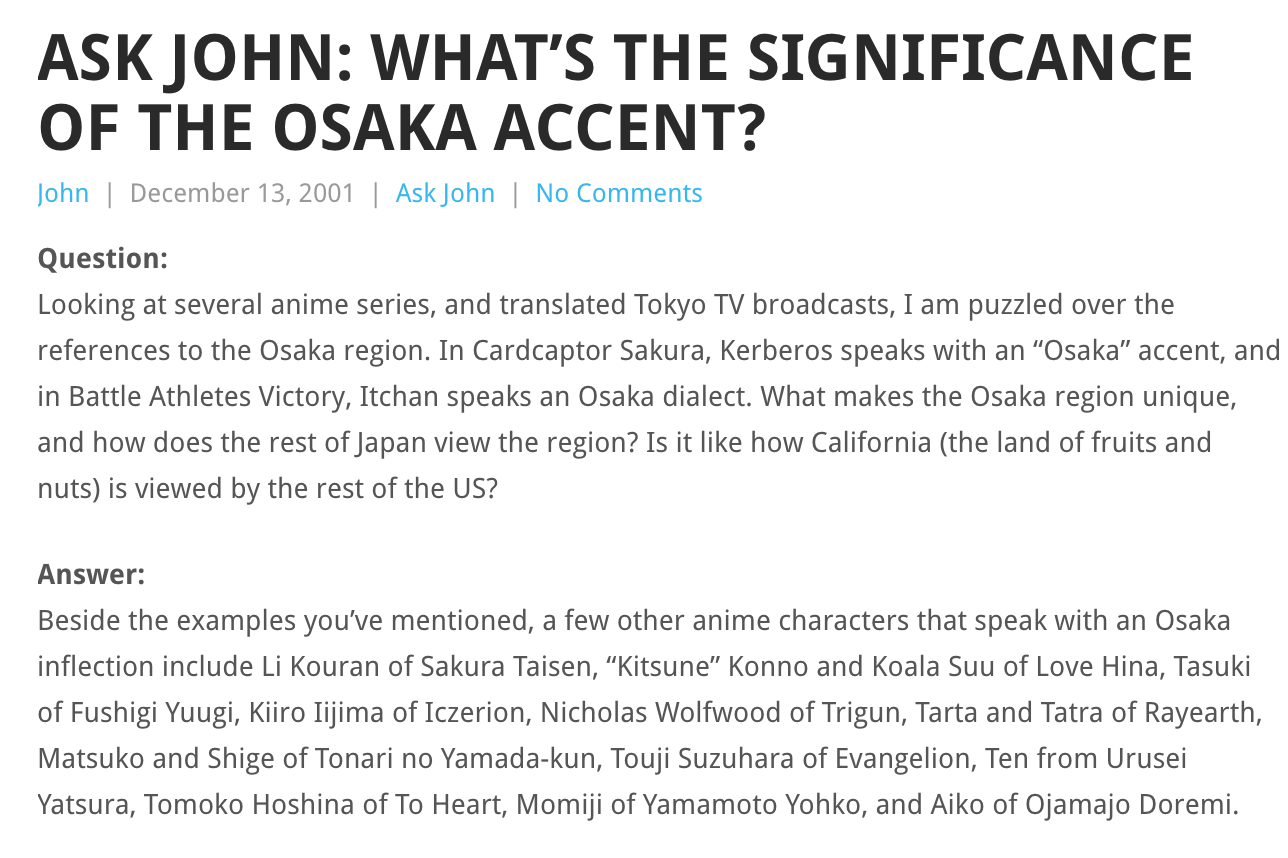 You can see in the second paragraph that Touji is listed as a character who speaks with an Osaka accent.

According to the wiki, the accent Touji speaks with in the English manga was supposed to be a New York/Brooklyn accent, which was also used to translate Osaka's accent in the Azumanga Daioh manga. In Abenobashi Mahou Shoutengai and many other shows, a Texas or Southern accent was used.

2
Why are most anime dubbed in American English, rather than British English?

33
What is the purpose of the Human Instrumentality Project?
14
What references to psychology exist in Evangelion?
8
What are the names of all the Angels in Neon Genesis Evangelion?
10
What characterizes an EVA pilot?
9
What was the point of the angels?
7
What is the Vessel of Adam?
9
What specific event was the forking point between the two storylines?
12
What is playing on Shinji's walkman?
11
What is Kaworu implying at the end of RoE: 1.01?
14
What is that covering part of the Nerv Logo?