At what point in the timeline does the Steins;Gate movie take place?

The new Steins;Gate movie, Steins;Gate: Fuka Ryōiki no Déjà vu, is set to come out in Japan on April 20th this year. Wikipedia says it is "based on the video game and anime series", but does not say whether it replaces the series, or if it's before, concurrent, or after the existing series.

When will this new movie take place in the Steins;Gate timeline?

Now that the movie is out, we can definitively say exactly when it takes place in the series. According to Wikipedia:

The film takes place in August 2011, one year after the events of the anime series.

Having seen the film myself, I can confirm this. The events in the film occur in August 2011, a year after the ending of the anime where Okabe is ostensibly on the Steins;gate timeline. For obvious reasons, it's only compatible with the true ending of the VN (the one which the anime followed most closely).

It is worth pointing out that this is not compatible with the official non-canon sequel Steins;Gate: Hen'i Kuukan no Octet.

The movie, featuring an original storyline taking place after the events of the series, is titled Steins;Gate: Fuka Ryōiki no Déjà vu (劇場版 シュタインズ・ゲート 負荷領域のデジャヴ Gekijōban Shutainzu Gēto Fuka Ryōiki no Dejabu?, lit. Steins;Gate the Movie: Loading Area of Déjà vu) and is scheduled to premiere in Japanese theatres on April 20, 2013.

That Wikipedia page cites this, which says:

The sequel to the 2011 Steins;Gate television anime series will open in at least 30 theaters across Japan.

To summarize, the movie takes place after the anime series.

This is the translated story description:

Okabe Rintarou—a self-proclaimed "insane mad scientist" and chuunibyou college student. With a coincidence, he created the "D-mail" with his friends, a mail that can be sent to the past. This led him to a cruel future resulting in the death of his friends, despite how many times the past was being changed (the shift of worldline)... Then a daylight appeared before the despaired Okabe, a future that no one will die, the worldline called "Steins Gate". After crossing timelines and solving all the mysteries, Okabe had finally arrived at the "Steins Gate". But being crossed so many worldlines, Okabe's mind has begun to severely "overload"... 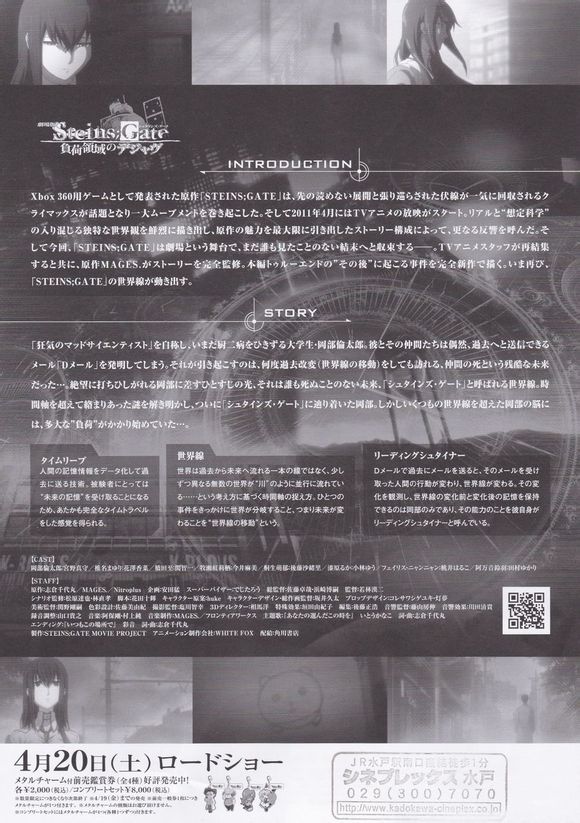