Did Touka become human after being attacked in Root A?

In Tokyo Ghoul: Root A, after the wing-type Kagune of Touka was devoured by her own brother, she was not seen to use it again.

Did she become a human after that incident? 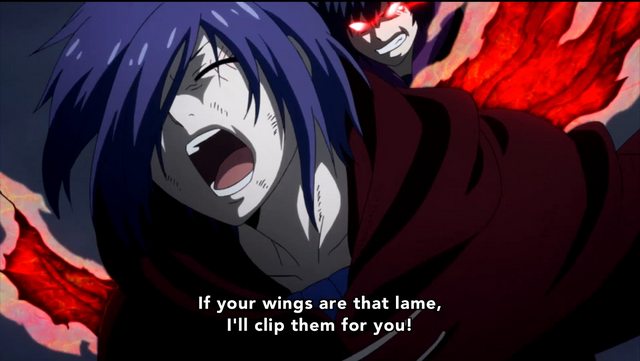 No, she is still a ghoul.

Ghouls can regrow their Kagune sacs, which is exactly what they did to Rize. Rize was kept restrained and bearly alive while they harvested her Kagune sacs and implanted them into dozens if not hundreds of humans, with only 3 known successes including Kaneki. You may also recall The fact that Jason had his sac eaten by Kaneki, but (I do not recall if the anime showed this) he still attacked Juzo before his death at Juzo's hands. His Kagune and body were turned into Juzo's Scythe, named after its source, Jason.

Touka is also shown to be still a ghoul in Tokyo Ghoul:re, the sequel to Tokyo Ghoul. So, rather, she just rarely actually uses her Kagune. She usually avoids fighting, and being an S-rank Ukaku type, she rarely needs to actually use her wings.

6
Can a ghoul's skin be pierced by earthly weapons?
3
What happened at the end of Tokyo Ghoul?
6
Did Amon die in Root A?
2
Could an Ukaku ghoul beat a Rinkaku ghoul?
2
Will Haise regain his memories and adopt to his true personality as Kaneki again?
2
Is the anime adaptation of Tokyo Ghoul:re faithful to the manga?
1
At the end of Tokyo Ghoul: Root A, is Yoshimura still alive?
1
Did Kishou Arima know about the dragon Kagune?
2
Can I read the Tokyo Ghoul RE manga if I have watched the first 2 seasons of the anime?