What were those Poneglyphs from the Alabasta arc?

During the Alabasta arc when the crew was crossing the desert, Luffy, Zoro and Chopper fell down a hole which led to a big dome-like structure. In the dome, there was a huge stone with Poneglyphs written on it. None of them knew what it was much less its meaning. It was dismissed. What I'm wondering is if those Poneglyphs was important and whether or not it had some clues about the Void Century?

As you can see from this list, episodes 101-102 which Luffy, Zoro and Chopper find the Poneglyph it's actually a filler episode. 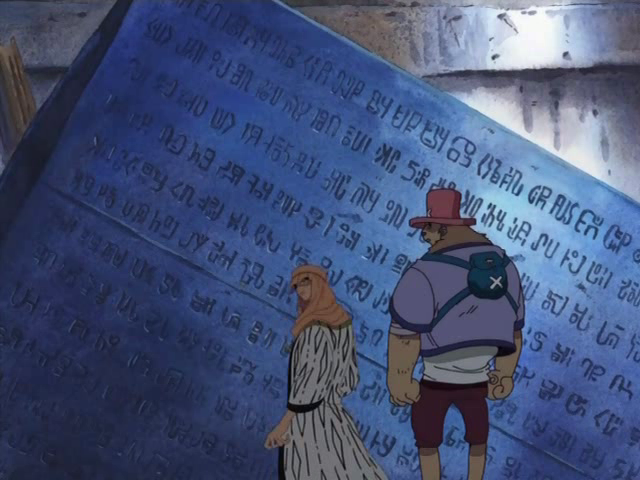 So this Poneglyph wasn't introduced in the manga, so that means that whatever was wrote on it doesn't matter.

I have one speculation. In Alabasta, there are 2 poneglyph. One was at the Kings tomb and the other in the desert. The Kings tomb has the info about the location of Pluton according to King Cobra but if you re-watch and re-read the arc closely you will notice that Alabasta has two Palace. The current one and one which is destroyed due to age and the desert not being inhabitable (or some other cause). My speculation is that the former Palace was surrounded by domes due to it being the former capital city. If I remember right, Alabasta was the only country that the King did not leave for Marijoise which is really suspicious. I'm guessing that the King was entrusted with one of the key poneglyphs that tell or is a part of the Rio poneglyph. But since the world government we going for a hunting spree for any book or memory about the void century, the King decided to move his capital city to its current position and leave the other poneglyph in the desert where no one will find it.

They might be Pluton as they say later in the show, because they didnt know what it is at they said that "someone" was trying to hide it.

I think that this poneglyph might contain some real information ,not about weapons but about void century. then someone from wano must have made another poneglyph as a decoy for alabasta king after moving the capital while only one or two persons would have had the knowledge of existence of that poneglyph making it hard for world government to locate and destroy real treasure and after some generation of family the secret must have lost.

This was actually addressed shortly after this episode came out by the anime team, and i quote "what was that Poneglyph in the cave where zoro chopper and luffy fell into?" Kōnosuke Uda "how did that get there, zoro's luck led him to the poneglyph that tells the history of Alabasta"

11
What happened to Bon Clay after the Impel Down arc?
10
Why weren't CP9 at the battle in Marineford Arc?
9
Was the first time Zoro experienced haki in Alabasta?
6
Why were Luffy, Zoro, and Usopp surprised when they saw the Dragon from Punk Hazard?
5
What is the other goal Zoro mentions in the Alabasta arc?
0
Which episode in the Alabasta arc has Luffy ate all the food on the boat and Sanji ask him about it?
2
Death of a character in the Baratie arc
3
Was the Dressrosa Arc inspired by the Alabasta Arc?
2
Did both Crocodile and Smoker use the artificial rain powder in Alabasta?
0
Does “One Piece Movie: The Desert Princess and the Pirates: Adventures in Alabasta” have anything related to the Alabasta arc in the anime series?