Why did Obito spare Kakashi?

During his time of Obito being with Madara, the White Zetsus told him that Rin and "Stupid Kakashi" were in trouble. Obito hurried as fast as he could to get to where Kakashi and Rin where. Once he got there, he saw that Rin was already dead and that Kakashi was the one who killed her. At the same time, Kakashi and Obito awakened the Mangekyou Sharingan which made Kakashi faint and Obito just sad/mad. Obito got so mad he went on a rampage. He killed all the other people that were around Kakashi and Rin. Once he finished, he went to Rin and hugged her. After that, he looked back to see Kakashi who was on the floor.

At that time, Obito had a huge chance of killing Kakashi, but for some reason, he did not want to kill the person who took the love of his life away from him.

For Obito, Kakashi was a victim just as Rin was. He didn't blame Kakashi for killing Rin but rather for "letting her die" and not being able to keep his promise. He was aware of the fact Rin had the 3-Tails inside her and chose to die by Kakashi's hand.

Hence, he never resented Kakashi himself but rather the world that created this situation and forced Rin to commit suicide.

In chapter 600 of Naruto, Kakashi asks Obito if he blames him:

Kakashi: Aren't you going to blame me?

Obito: With this insignificant reality, what good will blaming you do?

Obito: I hold no interest in the affairs of this world that's about to disappear. 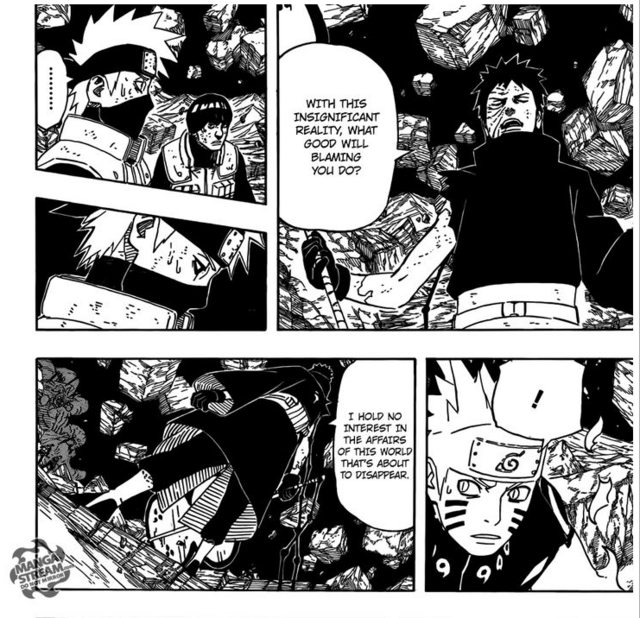 Before that, Obito knew about Rin having the three tails placed in her, and he couldn't bring himself to doing it. When Kakashi "killed" Rin, Obito and Kakashi developed their Mangekyou Sharingan. As Kakashi fainted on the ground because of it, Obito got mad and killed all of the mist ninjas around.

I believe he didn't kill Kakashi because he knew he was defenseless.

12
When did Kakashi and Obito awaken their Mangekyou Sharingan?
2
How did Obito slip through the rubble?
15
Why did Kakashi kill Rin?
6
Did Kakashi's sharingan evolve because Obito was watching?
3
How did Uchiha Obito summon Kurama?
10
Did Kakashi eventually surpass Itachi, Jiraiya, Tsunade, and Orochimaru?
13
Did Kakashi ever love Rin or at least feel anything for her?
12
Why didn't Kakashi take care of Naruto?
4
Did Obito let Kakashi win?