Tachibana Kanade (aka Angel) is a prominent figure in Angel Beats. The SSS,

at least in the first few episodes,

is constantly fighting her, but she has certain abilities that make her very difficult to defeat.

However, it's revealed that abilities aren't

God-given, instead, she uses software called Angel Player to create these abilities herself.

Angel Player was created by the Programmer, as stated in Episode 11. The Programmer is an elusive figure, who likely didn't even know Kanade.

So how did Angel Player find its way to Kanade, for her to later use?

Some time after the creation of the Angel Player program, a student by the name of Kanade Tachibana discovered the program and became the first user of the program. She used the program to create Guard Skills to battle against the SSS.

The exact details of the acquisition process is not revealed, however it is believed that Kanade found the program by herself. Considering that she has an English manual, it could be that she found it with one of the computers in the computer room, or bought it in the Afterlife.

According to an Interview with Maeda Jun (Angel Beats! planner, writer and music composer source) 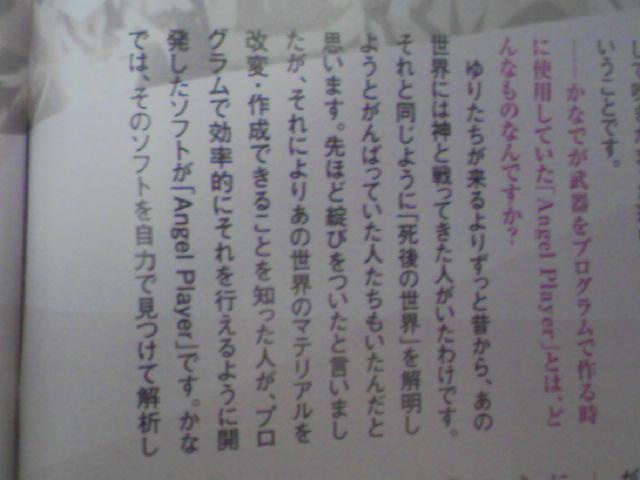 When Maeda was asked “What exactly is Angel Player?” this was his response:

There were people fighting against God, even before the arrival of Yuri. Similarly, there were people that tried to unravel the mystery of this world as well. Angel Player is the result of an individual who found ways to manipulate and create material. Kanade found that software on her own, analyzed it […continues]

Otonashi was not the creator of Angel Players. Nor was he the only bug to find its way into this world. Ultimately, Maeda seems to suggest that the world has been going on for god-knows-how-long.

In the interview, Maeda Jun [also] revealed and filled in some of the points of debate after Episode 13 of Angel Beats! last aired.

37
How is it possible that Kanade has Otonashi's heart?
4
How does the Angel Beats special episode connect with the main storyline?
11
How do Otonashi and Kanade remember Iwasawa's last song in their next life?
8
Why didn't the SSS create powers like Tachibana Kanade (Tenshi) did?
5
Why did Angel and Otonashi want to pass on and make others pass on?
6
Who is the mysterious Programmer of Angel Beats?