Is the Harbinger of Spring based on a real Japanese legend?

In Episode 2 of Flying Witch, this rather strange looking fellow appears and terrorizes poor Chinatsu at the door. 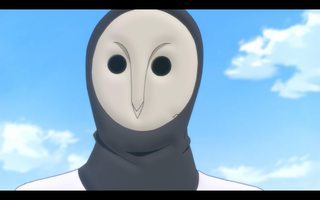 Makoto explains that he's the Harbinger of Spring, some kind of nature spirit who ushers out the winter and ushers in the spring, like a fairy. 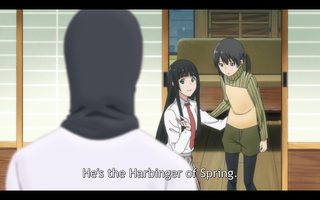 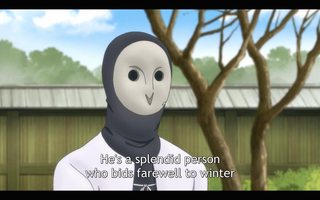 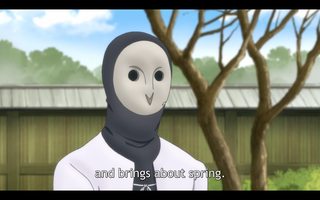 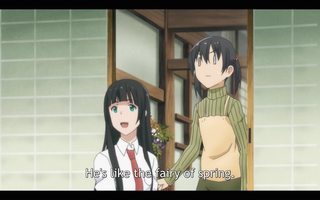 He's the Harbinger of Spring. He's a splendid person who bids farewell to winter and brings about spring. He's like the fairy of spring.

The series takes place in the modern day and the witches and magic are very Western in style. However, the Harbinger's clothing looks like traditional Japanese clothing (almost ninja-like). 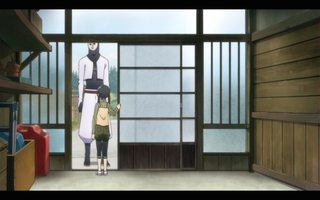 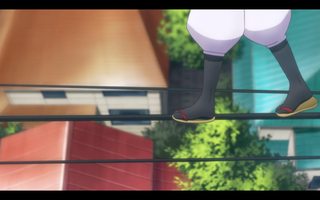 His mask sort of reminds me of a cross between the kodama from Princess Mononoke and the style of Jomon pottery: 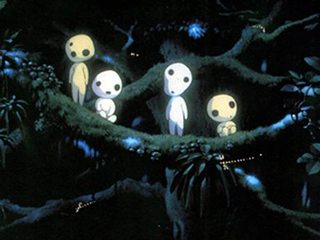 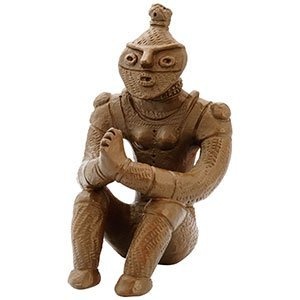 So, at least within the series, it seems like the Harbinger is supposed to be a traditional Japanese spirit. Is it based on any similar real-life legend or is it completely a creation of the series?

culture flying-witch
Share
Improve this question
edited May 10 '16 at 6:10

In the anime, the Harbinger of Spring is called 春の運び屋 haru no hakobiya (spoken around 07:50~07:55 on Crunchyroll).

While I don’t remember having heard this name or seen this appearance before, similar “spirits” exist in Japanese folklore. And animes like this usually portray one or two, e.g. Mushishi or Natsume’s Book of Friends.

I would consider the Harbinger of Spring a force or spirit of nature, and not necessarily a specific legendary being, even if it may appear as one, like in this anime.

I love the sophistication of the question, and it so happens that I was musing about this too. So, as a non-Japanese speaker, I did the obvious, and entered the Japanese characters for the Harbinger of Spring into Google search and got a wikipedia entry ... about the anime. Then used Google translate to get some sense of the Harbinger character. What I learned: it is definitely a barn owl, as one respondent suggested. And ... that's it. There does not seem to be an equivalent in traditional folklore (credit to the how creators, who are being inventive, albeit in a traditional way). The connection to Jomon and animistic beliefs is clear, and yes, Natsume comes to mind.

There is no direct correspondence in Shinto, which doesn't have a god or harbinger/herald of spring (except for the sakura tree), although in some stories a rooster is said to have tempted Amaterasu the sun goddess out of her cave - to end winter.

The mask is a stylized owl, though. In older legends, owls are bringers of luck/warders against misfortune.

Maybe it is even a reference to Kotankor Kamui / Chi-kap Kamui of Ainu legend? He was the land god of Ainu lands and was also an owl god (see Handbook of Japanese Mythology by Michael Ashkenazi). He was supposedly a god of plenty and in charge of making sure the humans and gods/spirits of the lands obeyed the rules and lived in peace. One of the better known stories about him has him ending famine by teaching the Ainu the proper rituals to honour the spirits/gods when catching & killing fish etc. so the gods would not withold their bounty.

Not the answer you're looking for? Browse other questions tagged culture flying-witch or ask your own question.

11
What are Holo's roots in Japanese tradition?
59
Why do some anime in Japanese contain English?
15
What are the Naruto hand seals based on?
10
Does anime really account for 60% of the world’s animation-based entertainment?
9
Is the Ship Spirit (klabautermann) based on any real legend?
2
When do Japanese high schools have midterms?
12
Why do first, second, and third grade of Japanese students wear different uniform in Anime?
11
Is Cheese-kun real?
13
Do real-life schools have maid cafes at their school festivals?