Is Goku in Dragon Ball based on Sun Wukong from Journey to the West?

When I was looking for info on Saiyuki and learned it was based on the Chinese novel Journey to the West, I was reminded of some things:

The Japanese name of Sun Wukong, the Monkey King, is Son Goku.

Some question here refer to Goku from Dragonball as Son Goku.

A number of images of Sun Wukong show him on a cloud with a staff, similar how Goku in the original Dragon Ball Series is shown with Nimbus and his staff.

So, I am wondering if Goku in Dragon Ball is based on Sun Wukong from Journey to the West?

Akira Toriyama was definitely influenced by Journey to the West in writing the original Dragon Ball manga. In early stories, Goku rides the Flying Nimbus cloud and wields an extendable staff, two aspects taken directly from his inspiration the Monkey King along with his name, and the fact that he turns into a giant ape is also a callback to his simian origins.

The quest to find the Dragon Balls was also a parallel to the quest for the sutras, or scrolls of the Buddha, and some of the other characters from Dragon Ball have parallels to Journey to the West characters, although they tend to be a little tenuous at times. And, of course, it didn't take long before the original story gave way to all the craziness and martial arts and ridiculously scaling power levels to the extent that by the time Dragon Ball Z came along the resemblances are superficial at best.

You can see mention of the connection in the Wikipedia article, although the sources are mostly print ones so you'd have to put a little leg work in to track them down yourself.

The last panel of the last page of the first chapter of Dragon Ball alludes to Journey to the West.

Remember your Chinese fairy tales? You don't? Not even the impish Monkey King and his magic staff, the Nyoibo? Oh, well... drop in next time and you'll learn... 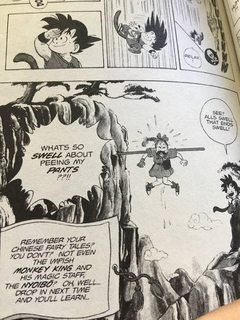 Not the answer you're looking for? Browse other questions tagged culture dragon-ball-series or ask your own question.

19
When does Son Goku learn to fly?
7
Why do some anime characters use Sanskrit spells instead of Japanese?
1
What was the original idea for the origin of Goku (if there was)?