Who typically owns the rights to an anime's soundtrack?

I watched episode 7 of Space Patrol Luluco today, and, well, that sure was a thing. Saliently, it featured

a piece from the Kill la Kill soundtrack: "Gekiban Tokka-gata Hitotsu-boshi Gokuseifuku" (OST 2 track 1), which is basically the soundtrack-ified version of "Before my body is dry", a.k.a. "DON'T LOSE YOUR WAY".

(I'm spoilering this because, frankly, this is the best anime-related surprise I've gotten in ages.)

This got me thinking - who typically owns the soundtrack of an anime? Is it the composer, or is it some other party, such as the animation studio or the production committee?

(By soundtrack, I mean the soundtrack; not OPs/EDs, which I strongly suspect tend to have different ownership schemes.)

The situation in Hollywood is interesting as a point of comparison - various ownership schemes seem to be possible (though I don't know which are more common). In some cases, the soundtrack will be treated as a work-for-hire owned by the film's producers; in other cases, the composer will own the soundtrack and will license usage rights to the producers; and surely other possibilities exist. (Keep in mind, of course, that Japan and the US have fairly divergent conventions when it comes to the handling of intellectual property, so the situation in Hollywood is probably not the same as the situation in... Akihabara?)

Here is what I found :

From what I understood, music industry in anime is not really transparent. It's difficult to find trustable sources.

Firstly I had the idea to ask to Thomas Romain and here is his answer (translation below the screen) : 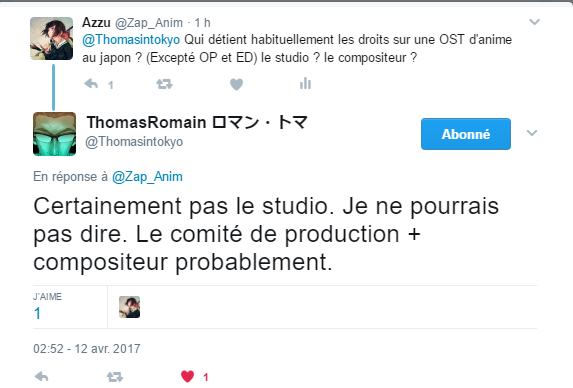 The translation : "Who usually owns the rights on anime OST in Japan ? (except OP & ED) the studio ? the composer ?" "Certainly not the studio. I couldn't say. Probably the production committee + the composer."

Thomas Romain is a French animator which works in Japan since several years. He works for the studio Satelight. So even if he's not sure about who owns the rights, I think you can trust him when he says that studios do not own the rights.

I also made some resarch on Wikipedia :

Japanese copyright laws (著作権法 Chosakukenhō?) consist of two parts: "Author's Rights" and "Neighbouring Rights." As such, "copyright" is a convenient collective term rather than a single concept in Japan. Japan was a party to the original Berne convention in 1899, so its copyright law is in sync with most international regulations.

They say the copyright law is in sync with most international regulations. There are 3 actors : the composer, the producers and the broadcasters (wire diffusers). In anime production like pointed before, producers and broadcasters seem to be the same.

About the rights of each of them :

And for the broadcasters (here the producers) :

Broadcasters and wire diffusers have the transferable economic rights of fixation, reproduction, making available, and retransmission. Television broadcasters also have a right to control photography of their broadcasts.

If you want more details, here is my source : https://en.wikipedia.org/wiki/Copyright_law_of_Japan

Based on several stores I visited online all the OSTs are sold/distributed by the companies that produce them.. see the link for Kara no Kyoukai OST it is distributed by Sony not ufotable.

Hence it must be owned by the company that produced it.

Thus the animation studio must have been licensed by JASRAC and the record label (Sony/Aniplex) to use the song.

Not the answer you're looking for? Browse other questions tagged anime-production music .

12
Who exactly is Benjamin Anderson in the Kill la Kill soundtrack?
4
Why do anime production studios keep the rights to anime which they don't plan on continuing?
5
Was the "Cake Song" released in a soundtrack?
19
Who generally owns the rights for a manga or anime?
6
What do the names represent in Koe no Katachi soundtrack?
3
Why does the Blue Sonnet soundtrack predate the anime by seven years?