Does Nausicaä wear underpants, and if not, what outside-universe reason is there?

I haven't watched all of it yet, but it seems as if Nausicaä isn't wearing underpants in the anime version. Either that, or she's wearing tight-fitting slacks that are of a colour close to skin tone. Is she wearing underpants?

If she isn't wearing underpants, what is the outside-universe reason for not doing so? Within-universe, it seems to make sense: a lot of the clothing worn is very simple clothing, as if it were hand-made. However, while other Ghibli works I've come across seem moderately relaxed with regards to clothing (you can briefly see totally innocent underwear in Kiki's delivery service, and there's a joking suggestion of nude portraiture) it seems a little surprising. Is a bias against prudishness a shared theme of Ghibli, along with a love of flying and a love of nature?

This FAQ (cited by Wikipedia) denies that any scenes were cut because of nudity, and states that the impression she doesn't wear underpants were because of poor quality videotape fansubs, saying that watching the DVD would clear it up - but I was watching the DVD to start off with. It also has some cover art from a manga version (not the anime) with white-coloured slacks.

We don't actually know if Nausicaa wears underwear, but no, I do not believe we're staring at her naked bottom throughout the entire movie.

In the manga covers, you can see pretty clearly that she's wearing white pants under her skirt: 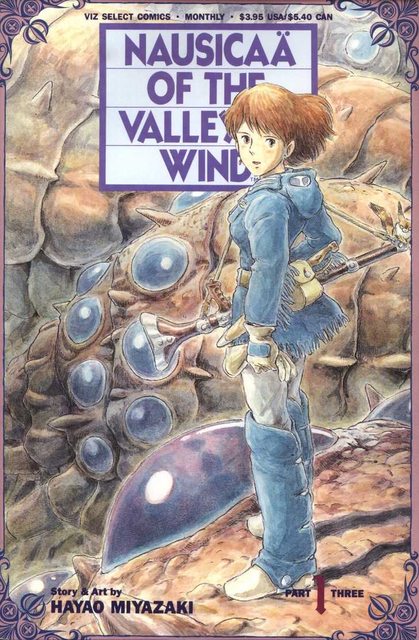 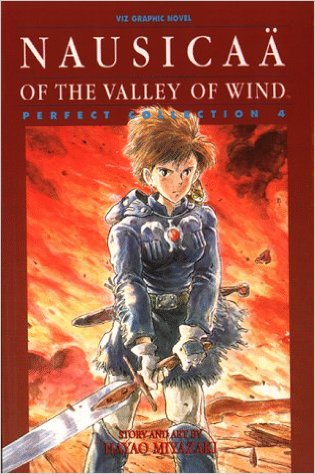 Not only is the manga the original work that the movie was based on, it was written and drawn by Hayao Miyazaki himself. (It's right there on the cover—story and art by Hayao Miyazaki. Wikipedia also confirms.) I don't know why he would have changed that between the manga release and the anime.

However, I won't deny that her pants in the anime are cream-colored and seem to be tighter fitting, which definitely makes it look like she's not wearing anything under her skirt:

I have seen the DVD release and can also attest that this is the same in the DVD. According to this review, it's actually the Blu-ray release that cleans up the colors:

Having never acquired the DVD release of Nausicaä due to it being a low priority. The faded quality of the version I first saw years ago probably had a lot to do with it. In 2011, Disney released the Blu-ray and last year I decided to fill a gap in my collection. That turned out to be a great decision.

Disney’s first Studio Ghibli Blu-ray release includes the movie on DVD and is of the digitally restored version. Suffice it to say this is the best the movie has ever looked in the States. The movie is presented in anamorphic widescreen in 1.85:1 ratio for both discs while the Blu-ray is in 1080p High Definition.

It is absolutely gorgeous with the colors finally being faithful. This is important due to prior releases making it look like Nausicaä wasn’t wearing any pants or underwear! The color of her pants were too close to the skin tone used and got lost in the mastering before this release.

Here is a gallery of images from the Blu-ray release. We can see that, while the pants are still not as white as in the manga, they are definitely a different shade from her face: 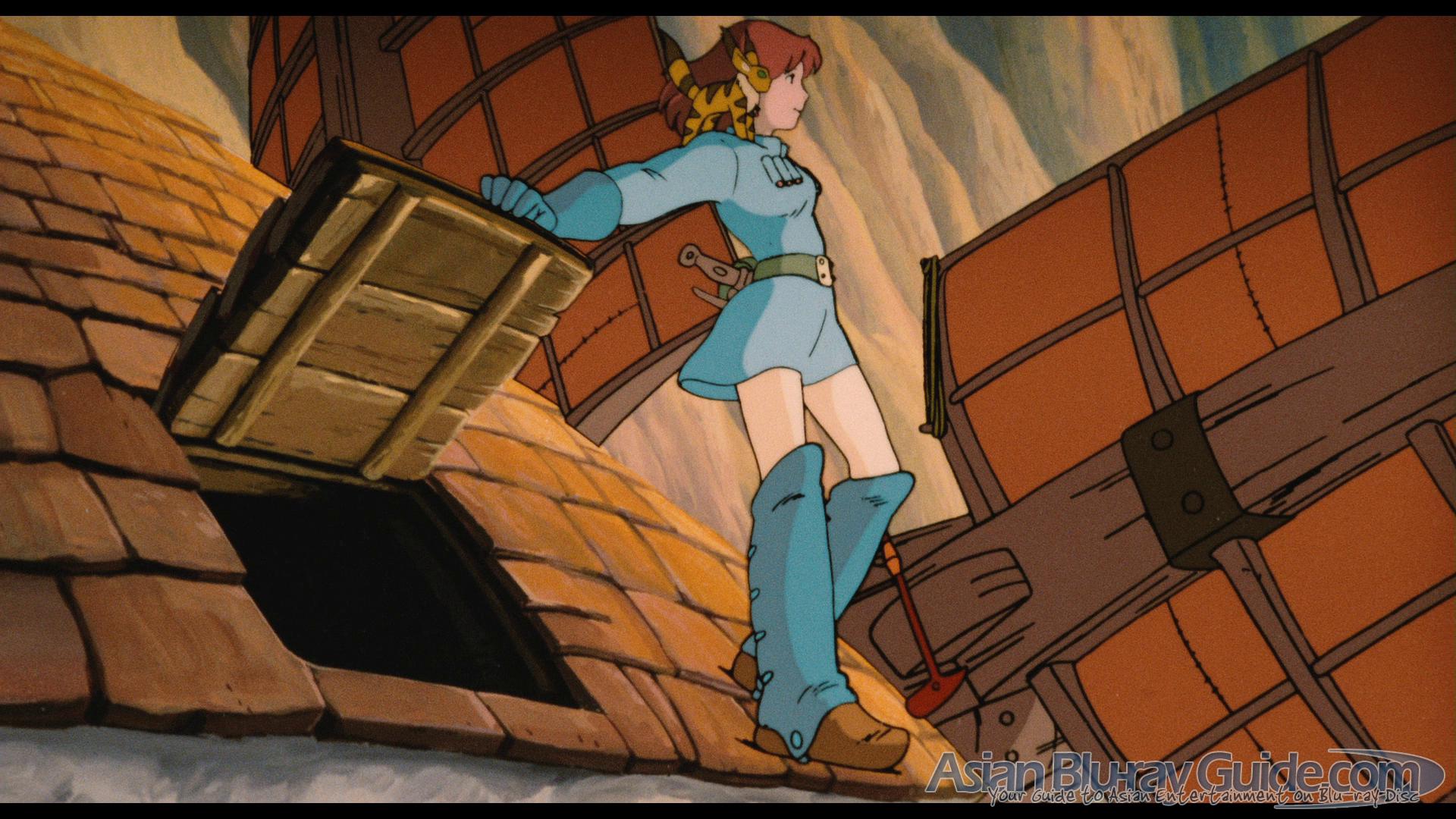 I wouldn't say that Ghibli films have "a bias against prudishness". They'll show underwear or a bath scene if it makes sense to show it, but by anime standards, they're quite sparing with nudity and sexual themes. Miyazaki himself is usually considered a feminist; here is one of many articles I found praising the feminist themes in his work. Even without all the other evidence, it just doesn't feel in character for Miyazaki to draw a heroine with no pants and no underwear running around exposing her naked rear end through an entire movie. So even if all we had was the DVD release and didn't have the Blu-ray or manga to suggest it to us, my vote would still go to "no, she's wearing pants".

I watched it for the first time a few days ago and it never occurred to me that she wouldn't be wearing anything. It's rather clear that she's wearing either pants or leggings. As Torisuda says above, the colors just don't match, especially during night scenes, and there are obvious places where the fabric bunches up and shows creases. 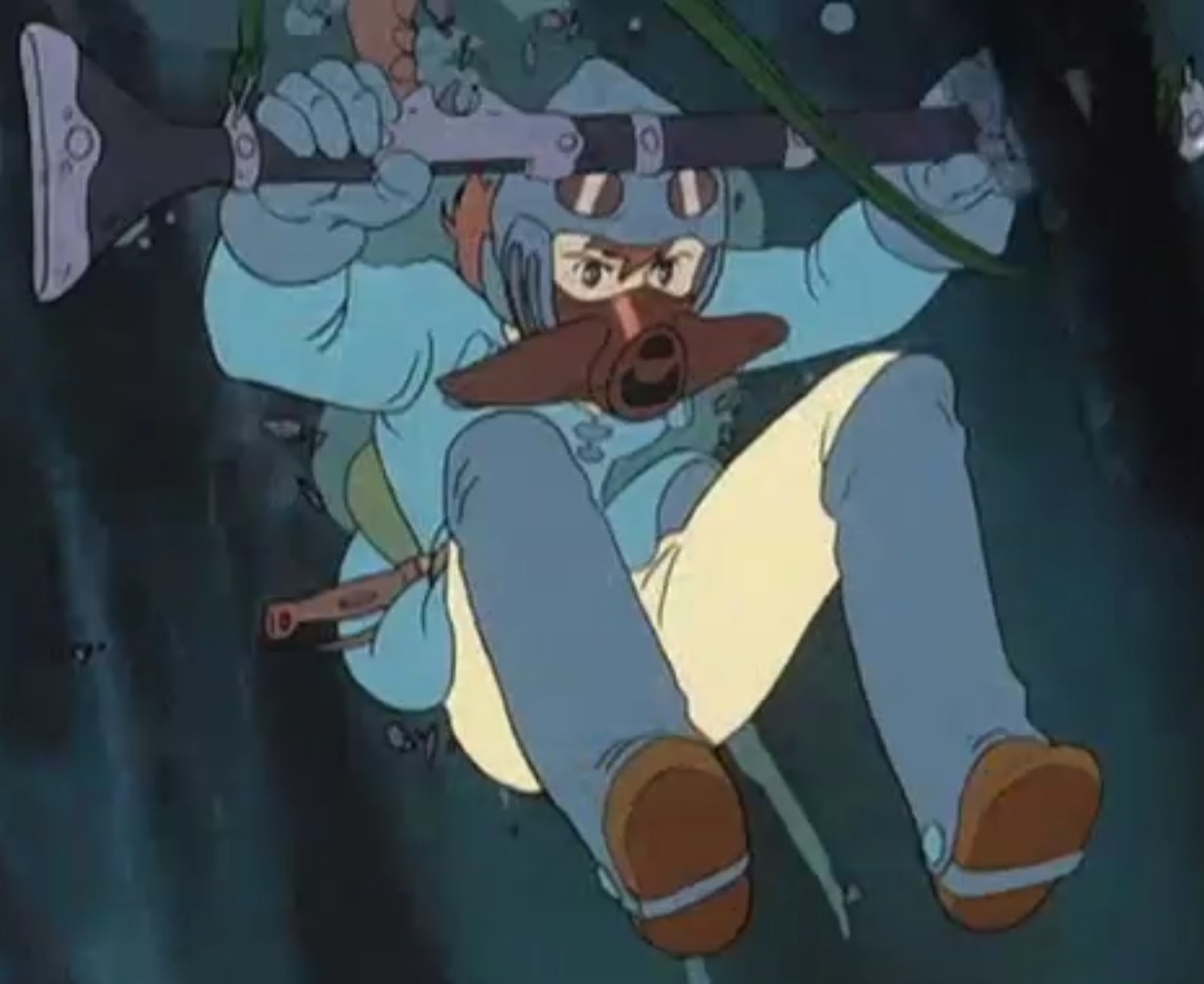 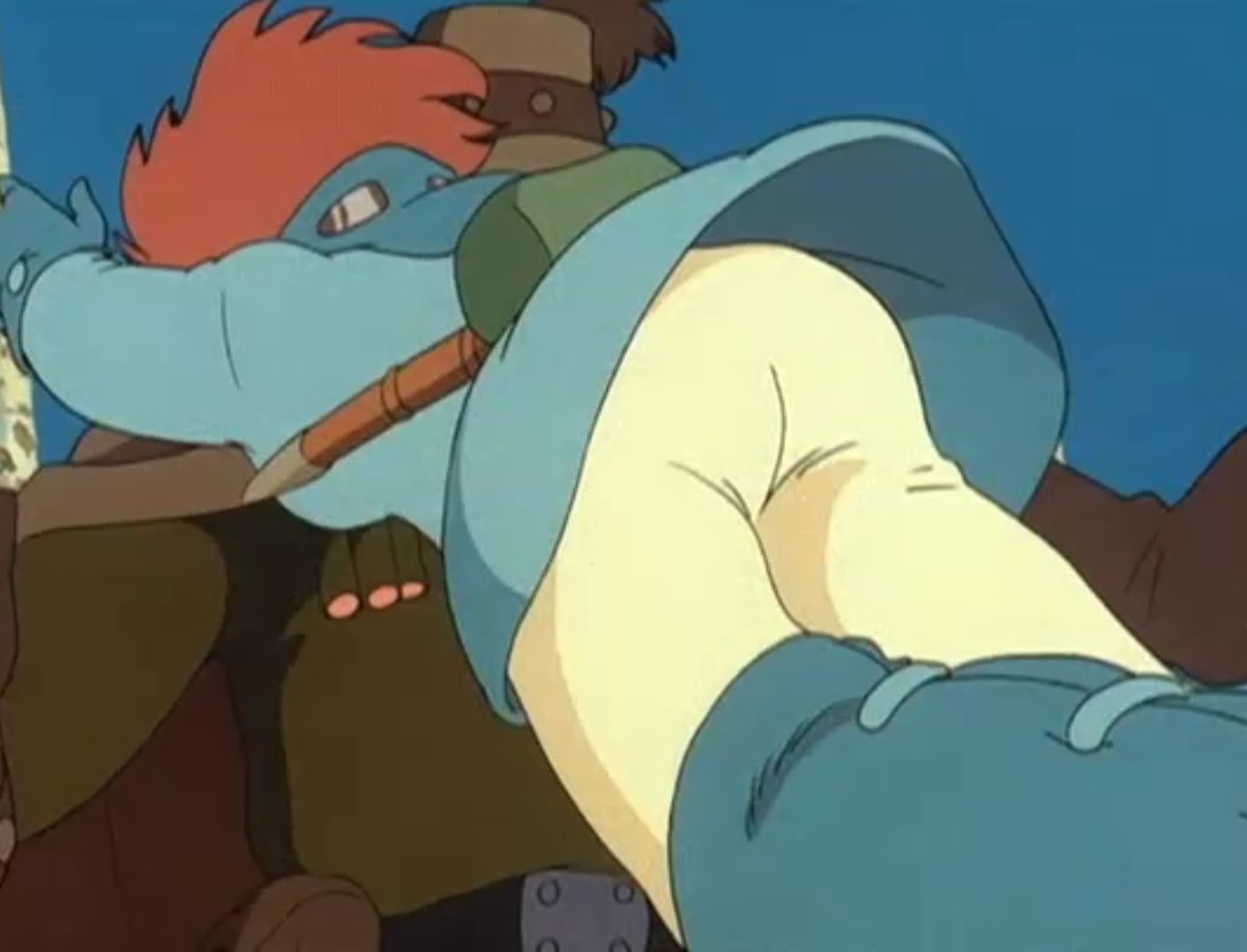 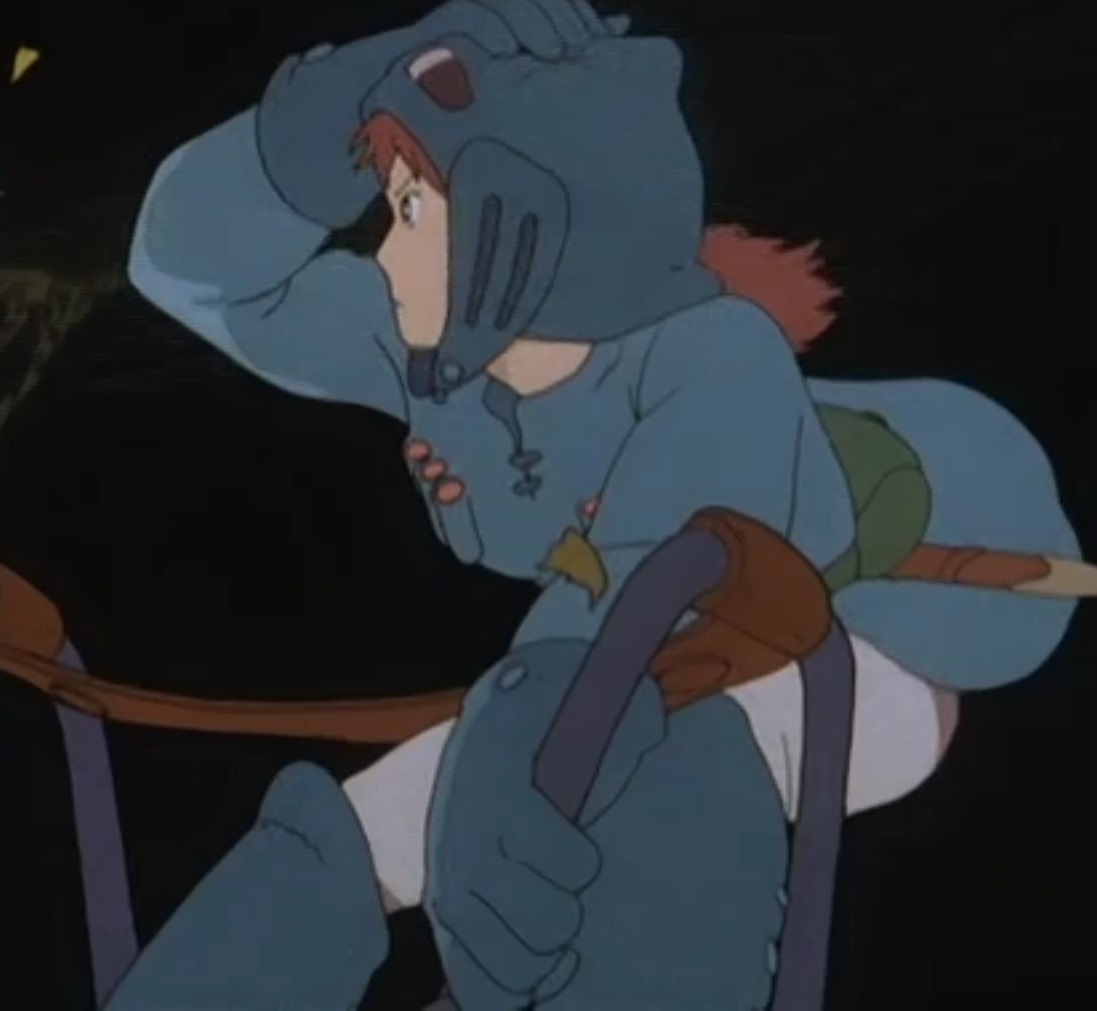 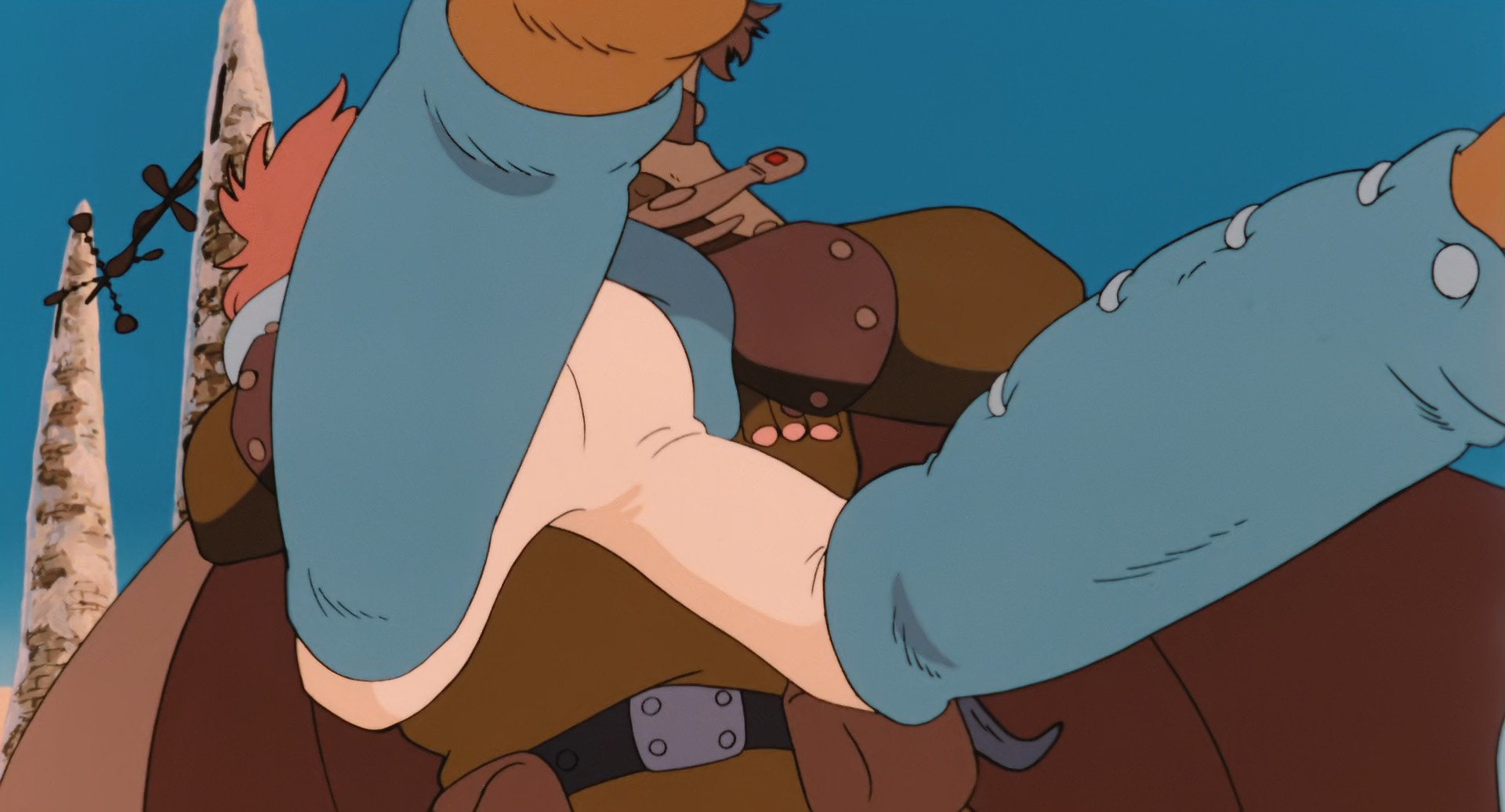 But you just know that the animators had some fun with it. 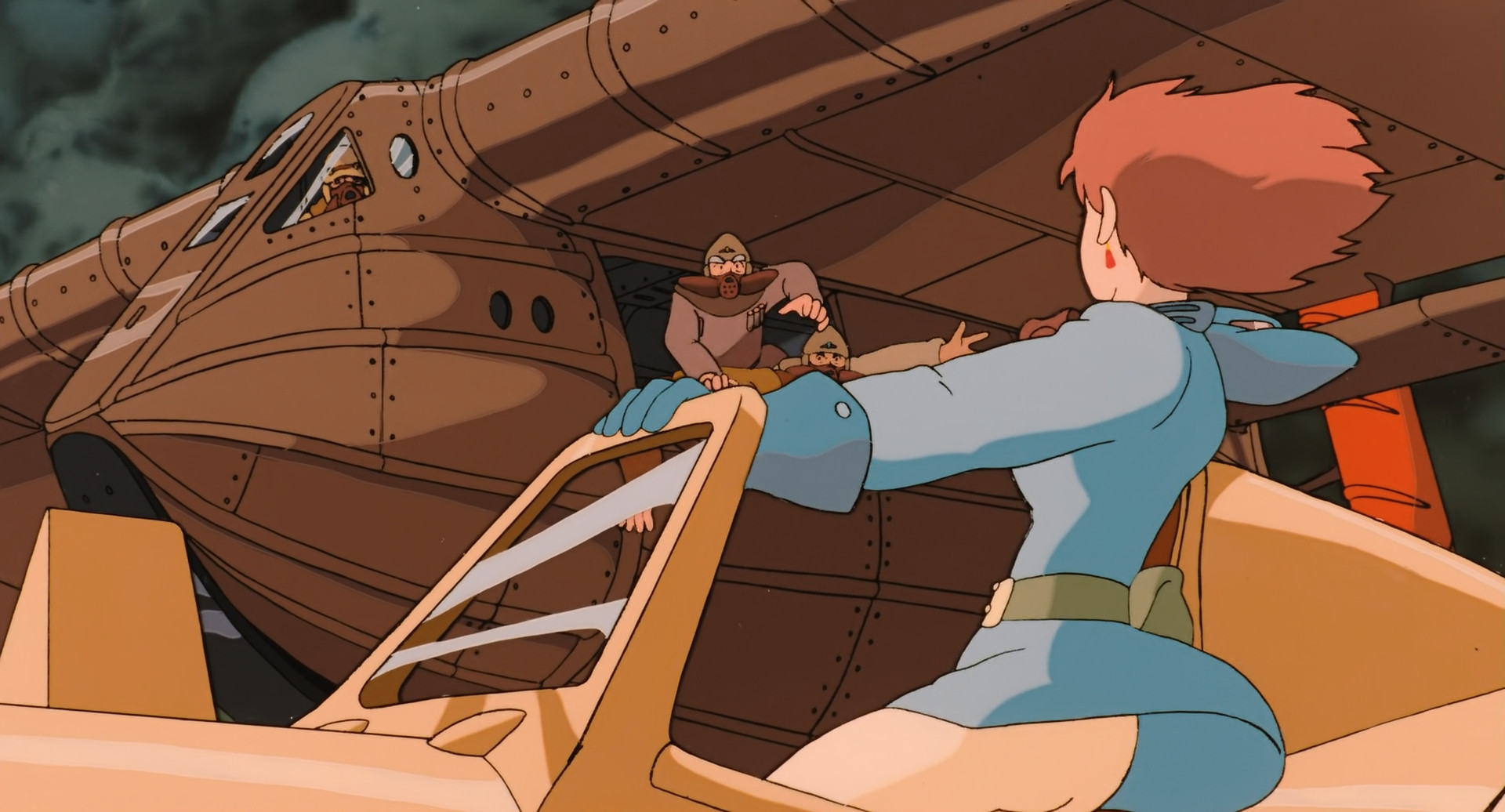 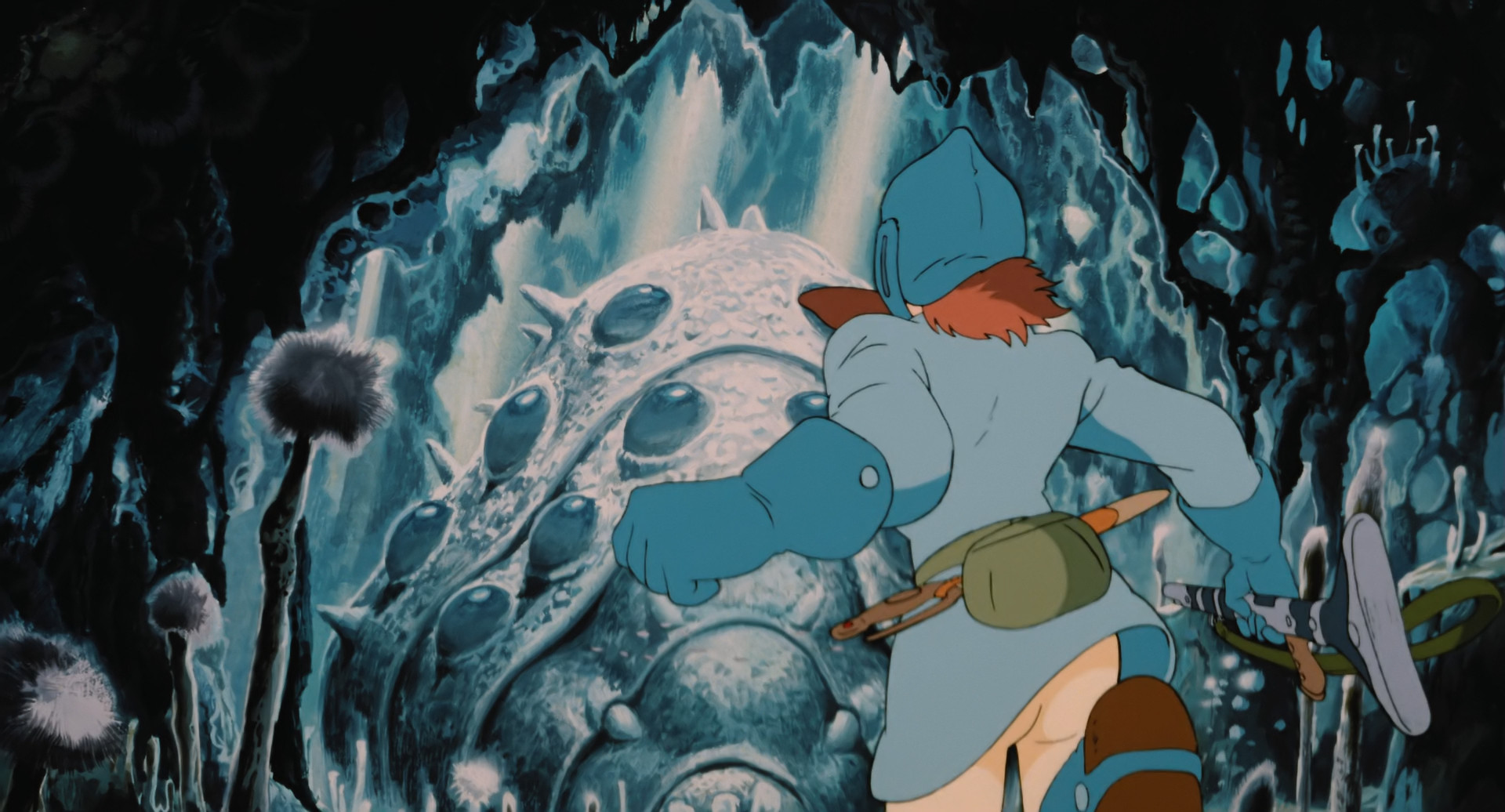 Not the answer you're looking for? Browse other questions tagged studio-ghibli nausicaa-of-the-valley-of-the-wind or ask your own question.