Has Ichigo's soul cutter existed before him?

I have a problem with the manga Bleach. When Ichigo became shinigami for the first time, it was said that his soul cutter is so big because of his spiritual powers, which means that your soul cutter is a reflection of that. But when they go to soul society it is clearly hinted that the shinigamis there choose their soul cutters and that the soul cutters they have have existed for generations before them. Can someone help explain this to me?

This answer can only be explained with a big spoiler. Those who hasn't read Bleach till the latest chapter and wish not to be spoiled might better avoid reading this altogether.

Note: the way I understand it, there are 3 questions you asked.

Renji's Zanpakutou's normal shape is a normal Katana. When the released into Shikai form (Zabimaru), it unleash more spiritual power and its shape got bigger. It gets even bigger when Renji is in Bankai state (Hihio Zabimaru) and even his body is covered by his power in form of the furry cloak.

Zaraki Kenpachi's Zanpakutou's normal form is a long katana with chipped blade. When released into shikai, his Zanpakutou changed form into a chopping axe shape.

Soi Fon's Zanpakutou is a short katana. Shikai form changed it into a smaller shape, but it's bankai changed it into a big rocket launcher like thing. Notice how its shikai form is smaller that its normal form, unlike the previous two examples, which is why I said that Zanpakutou's size reflects the spiritual power is generall true. Also, so far she has never been see using her Zanpakutou in its normal, unreleased state.

Another exception to this is Kurosaki Ichigo. Kurosaki Ichigo's Zanpakutou is always in its shikai form. But its bankai form actually made the blade smaller, and denser, unlike bankai in general, which was noted by Kuchiki Byakuya during their fight. Byakuya also said that he don't believe that such a small sword (compared to Ichigo's shikai and bankai in general) can be his bankai.

Normally, a shinigami is given an Asauchi, a blank Zanpakutou created by the creator of Asauchi, Ouetsu Nimaiya. This blank Zanpakutou will develop along with its wielder and make itself unique. This is how Shinigami normally got their Zanpakutou. Therefore, since all Zanpakutou (with the exception of Zangetsu) was an Asauchi, it can be said that it existed generations before the current generation of Shinigami).

Kurosaki Ichigo's Zanpakutou, Zangetsu, is special since Ichigo is a son of Shinigami and Quincy. His father, Kurosaki Isshin is a Shinigami and his mother was a Quincy. What he used to fight until his fight with Aizen Sousuke where he lost his "Shinigami" powers due to the use of Final Getsuga Tenshou, was later revealed to be his Quincy powers. It was confirmed by Zangetsu (old man form) himself. Zangetsu also said that the reason his figure is so similar to that of Ywach was because Ichigo also has a Quincy blood in him. His power is in his blood, thus it can be said that his Zanpakutou existed from the very moment he was born.

To specifically answer the question. There are 2 parts.

The Asauchi and the Zanpaktou spirit. reference

Asauchi are made by Ōetsu Nimaiya and given to Shinigami. In that effect, the sword does exist before the shinigami. It is this base form that can change size to refelct the spiritual pressure of the wielder. Ichigo was the example, his power was so great that when he took Rukia's Asauchi, it grew to that large size he initially had. In the Arrancar arc, Isshin Kurosaki is revealed to be a Shinigami, and he says the facts. Taken from the Refernce

No matter what form (or size) a Zanpakutō takes, it is always virtually effortless for its owner to wield because it is a part of its owner's soul. Shinigami captains all consciously keep their Zanpakutō in a manageable size, or else they would be holding Zanpakutō the size of skyscrapers, so one cannot judge the strength of one's opponent solely by the size of their Zanpakutō

So normal shinigami and evne seated officers do not have a massive amount of power and therefor their swords are of normal sizes. Once you reach high ranked officers and capitains, then the sizes are naturally so massive that they must control and contain it, Else it would be the size of a skyscraper.

The Shikai and bankai come from the Zanpaktou spirit. They in effect are a part of the Shinigami's soul, so they can not exist before the Shinigami. It is throuhg time and pouring their power into an asauchi that it turns into a complete zanpaktou and obtains Shikai and Bankai forms. Realistically, these guys can live separately from their owner Shinigami if forcefully taken from their souls, but will never do so themselves. It is however unknown what happens to the Asauchi at this point, and whether it can ever revert back to its regular form for another Shinigami or not is unclear. what is clear however is that the Shikai and Bankai forms are of Set sizes. No matter how much power the capitains grew in, their Shikai and Bankai did not change size. Mayuri Kurotsuchi even modified his bankai and could change its size though that, as well as when new forms of the Shikai and Bankai are revealed, but at no time could The shinigami ever change its actual size at will.

Ichigo himself is a special case, because of his blood and situation. In any case, his Zanpaktou and other powers did not exist before him. He however only had an Asauchi when he borrowed it from Rukia. He never used Shikai in that form, but we know the Asauchi can be used by anyone, which is what ichigo did. Once he reawakend his powers with Urahara, he no longer had an Asauchi and his zanpaktou itself formed without it, Though because it was not from an Asauchi, how much of a zanpaktou it really was after that is unknown.

This is quite complicated to be fair, and the explanation has many spoilers...

So Ichigo's powers come from a combination of

his mother, a Quincy, so indirectly from Yhwach, and from his father, a Shinigami.

He originally got this large Zanpakuto from Rukia. 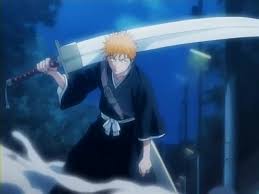 This was Rukia's power, with the sword made large by his own enormous Reiatsu. He lost this power after Byakuya cut his chain link and soul sleep. Urahara trained Ichigo, and he became a Shinigami with his classic Zanpakuto.

Lots of stuff and things happen, then he loses this power when

he uses the final Getsuga Tenshou to 'defeat' Aizen.

He gets a real Shinigami power back when a few captains come and give it to him. Later on, he's fighting against Jugram Haschwalth who

cuts his Zanpakuto in two, forcing Ichigo to have to go to the Soul Palace to get it reforged, where he has to go through the process all Shinigami do to get a new Zanpakuto, by fighting a Asauchi. After this, he speaks with Hollow Ichigo in his soul, who reveals he is Zangetsu, and the original Zangetsu was his Quincy powers, and Zangetsu (Hollow Ichigo) is his true Zanpakuto. He then creates his current two sword Zanpakuto when he grabs the Asauchi.

So yes, Ichigo's current Zanpakuto has existed before him, like all other Shinigami, and was fully created when he imprinted his power onto it.

And now in the most recent manga issue, we finally see

Ichigo's true final form (maybe... up till now at least!) when Zangetsu has brought out his Hollow powers and Ichigo has the horn on the side of his face: 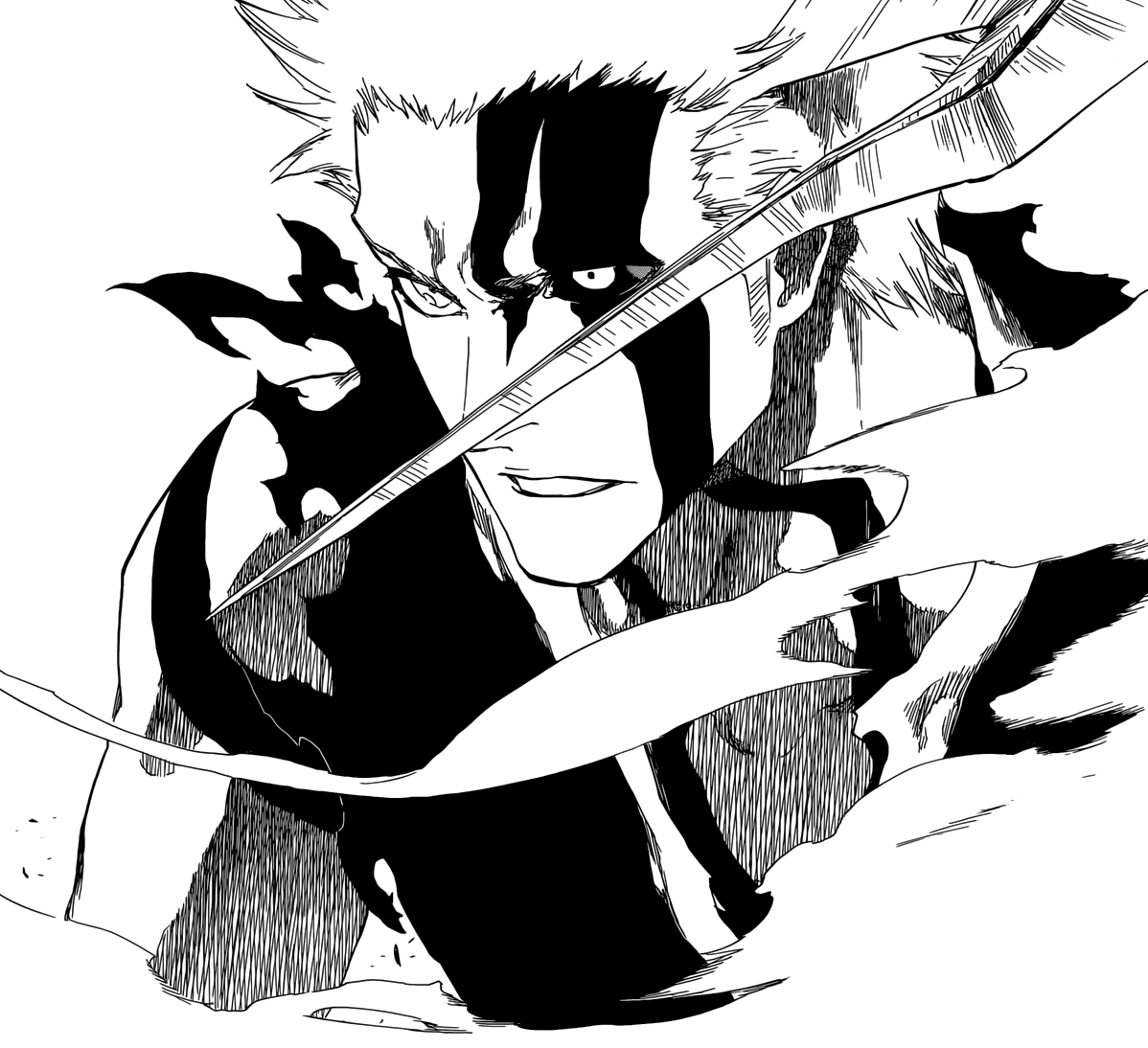 I think... lol it's damn complicated, I probably missed something or made a mistake...

8
Did Ichigo originally have Sode no Shiraiyuki?
10
Is it possible to transfer Shinigami powers accidentally?
2
Do people in soul society remember their life in the “living” world?
4
Aizen vs Everyone
1
What's the difference between Toshiro and Ichigo's Zanpakuto lore?
6
How does Renji become stronger than Rukia?
4
Why do shinigami bleed?
16
What is Jinta and Ururu's Identity?
4
Why not a single Shinigami was surprised by fact, that Ichigo has Zanpacto?