Why is Midori referred to as green-skinned, when she's not that green?

During the anime and the manga, the author refers to Midori as green-skinned, in fact, even her name means green. But she doesn't look obviously green: 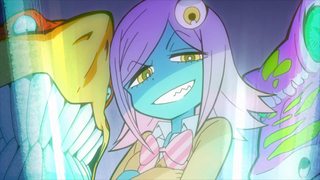 I would expect a name like Aoi instead if there was some leeway - http://www.omniglot.com/language/colours/japanese.htm

In the manga there is a panel with RGB codes, I thought I'd color her in just to make sure it wasn't an anime adaption problem & I removed the shading: 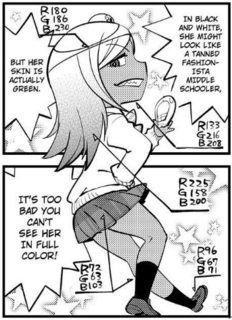 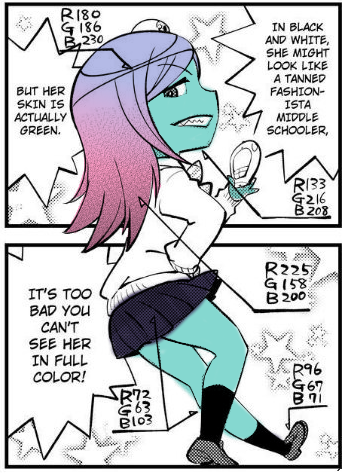 Midori's skin is hex value #85D8D0 or RGB (133,216,208). The green component of her skin is only 8 units larger than the blue component. Thus, even without my subjectiveness, she can't be considered green-skinned. Several color-focused websites classify the color as Cyan, not a shade of green.

Is there some reason for this - maybe based in language? Why didn't they just say she was cyan / aqua / turqoise? or even, blue?

Think of it this way, Midori is what the Japanese would refer to as a "Gyaru."

One of the more popular styles of gyaru is "Ganguro", characterized by their deeply artificial tan and dyed/bleached hair. 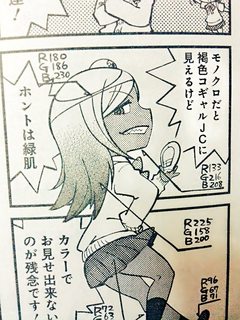 Green skin might refer to her natural skin color. It's likely that she chose another hue as the bronze shade of typical ganguro gyaru is too similar to her original color. After all, ganguro gyarus are not only into radical fashions radical fashions, but also radical makeup. So some order more radically different shade makes sense in this context.

You make the mistake in thinking "midori" can only refer to the kanji [緑]{midori}. If your are unaware the kanji [青]{ao} refers to both the color blue and green (more commonly the former nowadays). Another way to write this kanji is 碧. While typically pronounced "ao," many people take it as a given name and pronounce it as "Midori." The name here might be use in an ironic sense (character design wise), like calling a black cat "White."

Cyan is a greenish-blue or a light blue color. This fits her character and name in two ways:

Japanese has multiple words for the color turquoise:

The green part in ターコイズグリーン isn't 緑 (midori), but Midori is a common girl's name.

And she is probably called green-skinned, because turquoise-green-skinned is way too long. So they only use the last part.

Not the answer you're looking for? Browse other questions tagged space-patrol-luluco or ask your own question.