Who's inside the third coffin that Orochimaru tried to summon?

In the battle between Sarutobi Hiruzen and Orochimaru during the Chunin Exams, (on the rooftop where the Sound Four sealed them in a barrier) Orochimaru summoned the two previous Kages. He also tried summoning another coffin but Hiruzen successfully stopped it.

Who was inside that third coffin? It can't be the Fourth Hokage right? Because that time, he was still under the Shiki Fuujin Seal.

As can be seen on this image, it was indeed the 4th Hokage that Orochimaru tried to summon. 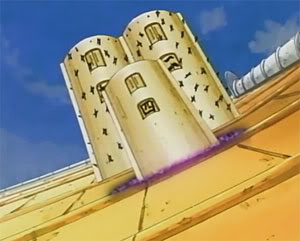 The kanji that appears in that coffin is 四, which is the kanji for 4.

However, unlike you said in your question, Hiruzen did not stop this coffin. It was the fact that the 4th Hokage was sealed with the Shiki Fuujin that prevented that summoning.

There is a way to be the Fourth, but very unlikely. In the anime, probably in the manga as well, Kabuto taught Obito Edo Tensei. He got Danzou's bodyguards to show an example. He kills one of them, take his DNA and start the ritual. After it's complete, the dead guy is standing there, but he's not moving. That makes me think that only the body was there, and not the shinobi's soul or mind. As we saw in the Chikara filler arc, Kabuto tried to use some of the Akatsuki members but failed, saying that it was not enough time to use it yet. That could mean that between successive the ritual, there is a cooldown time, maybe the time for his mind or soul take control of the host. Considering this, the most probable thing is that it was the Fourth, but the ritual was made not so far in the past. Orochimaru did complete the ritual, and had Minato, but he couldn't use him right away. He tried to summon him on the fight, but because of the Shiki Fuujin, the host was not taken over by Minato's soul or mind. Either Orochimaru didn't know about the sealing or didn't know about the cooldown time. Minato died protecting the village, but many didn't know how. Orochimaru maybe didn't know he was sealed, and that made the coffin to failed and he being surprised in the fight.

Orochimaru, one of the legendary sanin might knew that the souls trapped by reaper death seal cannot be summoned. So, there was no 4th hokage. However, the kanji on the coffin reads 4. It might be possible that there was 4th kazekage who was killed by orochimaru before the invasion on konoha. Fortunately, hiruzen able to stop it by performing some hand seals.

I see a lot of pro Fourth Hokage for who's in the coffin throughout all the Naruto posts. Personally, I believe this could have been Madara. Maybe originally in the series, it was meant to be the Fourth by how the first two were former Hokage, but as for current timeline, it was established the Fourth was trapped by the Death Seal so he could not be revived without the ritual Orochimaru had to perform much later in the series. However, Kabuto did have Madara's coffin in the war which is probably a good indicator that it was probably the 3rd coffin Orochimaru was going to use and why the 3rd was afraid of it.

Yes, it was the Fourth and it didn't fail because he was already sealed, as later on (much later) Orochimaru summons the Fourth and the Third to fight in Chapter 329, I believe (not certain which episode).

robertrobert
1
1
Add a comment  |
Highly active question. Earn 10 reputation (not counting the association bonus) in order to answer this question. The reputation requirement helps protect this question from spam and non-answer activity.

4
Can a person killed by Death Soul Reaper be brought back to life through Reanimation?
0
Reanimation of Yondaime during Chunin exams

6
Is the reanimated Minato much stronger than when he was alive?
10
What's the deal with Orochimaru and seals?
20
Who is the strongest Hokage?
0
Reanimation of Yondaime during Chunin exams
2
Did Orochimaru release all the souls sealed inside Shinigami?
5
Do the trapped souls in the Reaper/Shinigami suffer?
1
What happened to the power of the tailed beast that was inside Naruto?
5
How did Hiruzen Sarutobi summon Enma when he was a reanimation?
4
Was the Blood from Gara's Sand Coffin always black?
3
How was Orochimaru able to jump bodies?