Why do Kurama and Gyuki appear as chakra while other bijuu don't?

In Naruto, Kurama (the Nine-tailed bijuu) appears as chakra, as does Killer B's bijuu, Gyuki.

Other bijuu, however, don't appear that way. What is different between them? 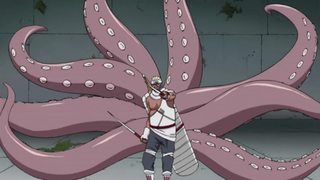 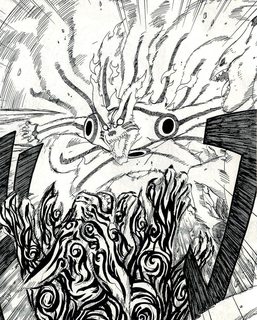 As for the case of Isobu, he generally appears in that form because he was not sealed (at that moment) inside anyone. Thus, he appears in his full transformation form.

So basically, from what I've been able to gather, the different levels of transformation are as follows (I will use Naruto as my example):
- Initial form: in which the Jinchuuriki is simply enveloped in Bijuu chakra. Naruto's transformations shown in the first anime series generally fit into this stage.
- Version 1 of transformation: in which (in Naruto's case) up to three tails are are shown, in addition to the initial form's chakra cloak.
- Version 2 of transformation: the one shown in Naruto's fight against Pain, in which the Kyuubi's skeleton and up to (I think) 8 tails were shown.
- Partial Transformation: Naruto's partial transformation happened when Pain tried to seal him with Chibaku Tensei. However, in Naruto's case, he had no control whatsoever over the Bijuu. Different examples of this stage are Killer B's case (the image above) and Gaara's (the image on your question).
- Full Bijuu Form: Which Naruto has not been able to perform yet. Killer B however, has been seen to do this frequently and without much effort.

There are also the two most powerful transformations that Naruto was able to do (Kyuubi Chakra Mode and Bijuu Mode), but I do not know where those fit in the above 'scale' of transformations.
Plus, Version 1 and 2 are (as explained above) specific to Naruto's case. However, there is an intermediate stage between the initial form and the partial transformation stages for any Jinchuuriki, in which, proportionally to how powerful the form is, a certain (growing) number of tails appears.

On a side note, Naruto Wiki puts Killer B's Full Transformation Mode alongside Naruto's Bijuu Mode, giving them both the same name (Bijuu Mode). However, I am unsure as to why this is, because it seems weird that Naruto's Full Mode would look so different from all the other Jinchuuriki's.
Plus, his page there is the only one where both terms (Full [Bijuu number] Mode and Bijuu Form) appear. In Jinchuuriki 1 through 7, only the term Full [Bijuu number] Mode appears, in Killer B's case only Bijuu Mode (Tailed Beast Mode) appears, and in Naruto's case both terms appear.

Not sure how to do this but to add on to the previous answer, I suspect naruto's bijuu form is so different due to his uzumaki chakra which manifests in this form. An alternate possibility is kurama's chakra has a unique nature to it.

I think Kurama appears in this form, because of the form of sealing and the amount of chakra that is sealed inside Naruto. Like we know from the manga (chapter 643), Minato just sealed the half of Kurama inside of Naruto and the other half inside of himself. Because of this, Kurama probably just appears in Chakra-mode.

Gyuki probably appears in Chakra-mode because he is linked to Killer Bee (they are friends), so Bee only activates Chakra-mode, because in this mode his strengh is equal with the Raikage's (perfect precondition for their lariat). And if Bee is fighting alone it's enough to deal with his opponent.

(Please forgive me if I wrote this a little twisted and with spelling mistakes, but I'm a German and I'm not the best English-writer.)

Wrong. Remember guys when Naruto fought Kurama in a tag of war of chakra? When Naruto got Kurama's chakra, he just transform into bijuu mode.

The reason behind Naruto's transformations is not that he only has half, but because Naruto and Kurama are not used to being completely linked. Kurama states that he can only use a percentage of the full transformation. Due to the war, they haven't had enough time to train to completely link the transformation. As for the other half, Minato has it inside of him, and Naruto reconnects the yin and yang chakras when he meets Minato.

You guys come up with so many theories but forgetting that each Jinchuriki's transformation corresponds to their own tailed beast.

However, for Kurama's case, it is mentioned before that its form is unique only to its current host.

For all, I believe that it's already in a complete form. If not why would Ashura want to fight a perfect Susanoo against Indra with the same tail beast transformation as what Naruto is doing in manga chapter 670.

However, in episode 365 we see that everything within the Shinigami is unsealed, thus having the remainder of Kurama's chakra unsealed and possibly on its way back to Naruto and Kurama. If this happens, they may be able to do a complete transformation.

Even still, this may not be possible since a portion of Kurama's chakra is also inside of the Gold and Silver twins (Kinkaku and Ginkaku), which were both sealed away during the Allied Shinobi War at the ocean/beach front.

4
Is the amount of chakra extracted equal to the size of the part that is cut off from the Bijuu?
7
What are the sealing techniques used to contain the Tailed Beasts?
5
After Orochimaru revives the 4 kage how does Minato know how to use Kurama chakra mode?
4
Why did Kurama keep helping Naruto?
8
What are the similarities and differences between Reiatsu and Chakra?
9
Why does Naruto get a cloak from the Nine Tails while other Jinchuriki don't?
1
What is negative red/positive blue chakra?
1
Difference between Kumiho(Gumiho) and Kurama