Why does Yuno paint her license plate yellow?

In Volume 7 of Hidamari Sketch, the girls decide to play The Game of Life. They're bored with the generic jobs and events in the regular game, so they decide to customize their copy of the game using their art skills and creativity.

The first thing Yuno does is paint the license plate on her car game piece yellow, saying it's because the car is a light vehicle. 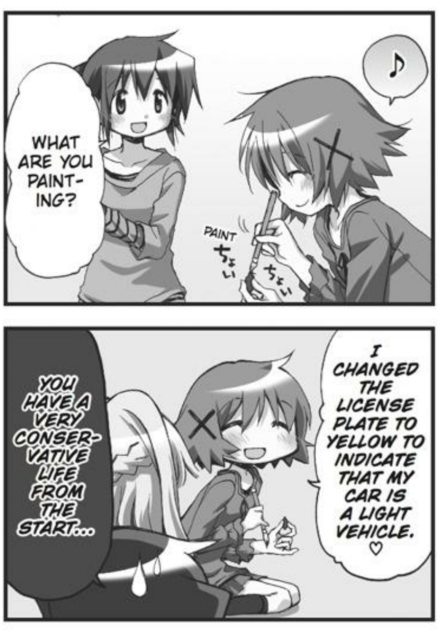 Nori: What are you painting?
Yuno: I changed the license plate to yellow to indicate that my car is a light vehicle. ♡
Nori: You have a very conservative life from the start...

What is she talking about? Why did she do this?

In Japan, the color schemes used by license plates are standardized at a national level. Plates with black text on a yellow background are used for "light vehicles" (sometimes glossed in English as "kei car" from 軽 kei "light"). For example:

A three- or four-wheeled vehicle is deemed a "light vehicle" if its engine displacement is 660 cc or less and meets a few size and weight restrictions.

These cars are fairly popular in Japan (as of Mar 2015, 39% of all vehicles in Japan were light vehicles; this is up from 26% in 1998), for reasons apparently having to do with how Japan taxes and regulates vehicles. They also sell reasonably well in South/Southeast Asia.

I would agree with Nori that light vehicles are conservative, primarily because they're often rather boxy and unattractive (because of the size restrictions) and because they accelerate slowly and generally have poor "performance" (because of the small engine). They seem to have many benefits, especially in urban environments (easier parking and maneuvering; lower taxes and cheaper insurance; better gas mileage; and apparently there's less bureaucracy involved in registering one). But you're not going to impress almost anyone with a light vehicle.

(Semi-related plug: if the minutiae of Japanese motorcycles interests you, check out Bakuon!!, which is basically Top Gear, except with cute girls riding cute motorcycles.)

Not the answer you're looking for? Browse other questions tagged culture hidamari-sketch or ask your own question.

19
Why does censorship level differ between manga and anime?
8
Why does Yomi relate 3661 with "Samurai"?
2
Why does the hospital in Another have no fourth floor?
3
Why does Orochimaru's Laboratory have this item to hand?
3
Why do Mio and her friends seem to all wear different uniforms?