Who is the voice actress for the 'young' Nori-chan from the anime Kiznaiver?

Unless I am mistaken, it seems as if Nori-chan from the anime Kiznaiver has two different voice actresses. One for the 'young' Nori-chan and one for the main part of the story.

My question - Who is the voice actress for the 'young' Nori-chan? 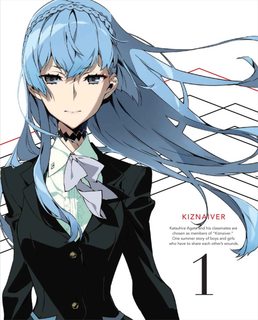 The young voice can be heard in

I'm sure I've heard this voice before, it is incrediby irritating.

They aren't played by the same person.

Who is the voice actress for the 'young' Nori-chan? 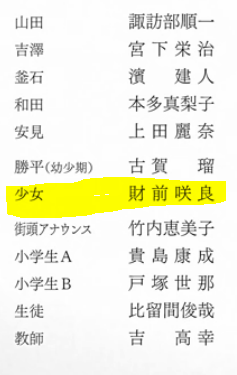 In episode 9, she's again credited, this time as "Sonozaki (child)" (園崎（幼少期）). Curiously, her name is spelled 財前咲来 this time. She has barely any internet presence, but judging from this page, I think the episode 9 spelling is correct. (The same spelling is used when she's credited in episode 10.) 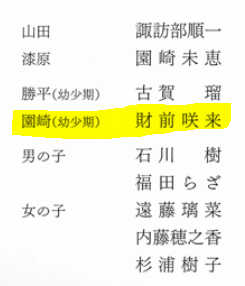 I'm sure I've heard this voice before, it is incrediby irritating.

As near as I can tell, this is her first role in anime, so you probably haven't heard her before.

It does appear that she voiced young Cinderella in the Japanese dub of Disney's 2015 Cinderella, though, and I imagine she might've had some other minor gigs (commercial voiceovers, etc.) too.

Not the answer you're looking for? Browse other questions tagged voice-acting kiznaiver .

10
Why do drama CDs and anime series of the same franchise use different voice actors sometimes?
23
Is there any specific reason why female voice actors act for male roles in anime?
3
Who is the voice actor of Shouya's mother in Koe no Katachi (The Shape of Voice) movie?
18
Why do anime films tend to use film actors to voice the anime instead of professional seiyuu?
12
Can Japanese voice actors watch anime for free after an anime episode is finished?