How does Nerve Gear work?

When I watched SAO for the second time, I started to wonder: how does Nerve Gear work?

In SAO, you have all five senses with you, and also when you use the Nerve Gear, you close your eyes. So, how is it possible for the nerve gear to do all this?

Lastly, how does Nerve Gear kill someone?

In SAO, you have all five senses with you and also when you use the nerve gear, you close your eyes so how is it possible for the nerve gear to do all this?

It connects to your brain, transmitting signals of what you do in the virtual world. You close your eyes because nerve gear transmits visual data too. 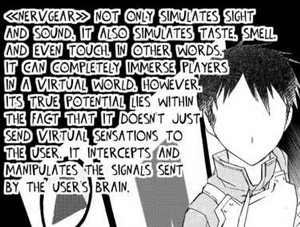 NerveGear not only simulates sight and sound, it also simulates taste, smell and even touch. In other words, it can completely immerse players in a virtual world. However, its true potential lies within the fact that it doesn't just send virtual sensations to the user. It intercepts and manipulates the signals sent by the user's brain. 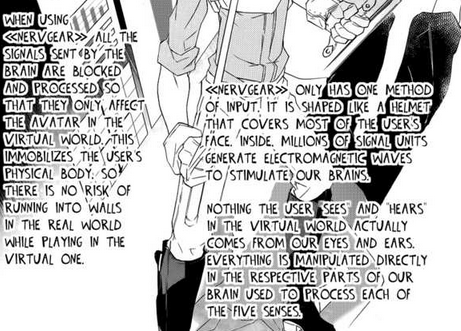 When using NerveGear, all the signals sent by the brain are blocked an processed so that they only affect the avatar in the virtual world. This immobilizes the user's physical body. So there's no risk of running into walls in the real world while playing in the virtual one.

NerveGear only has one method of input. It is shaped like a helmet that covers most of the user's face. Inside, millions of signal units generate electromagnetic waves to stimulate out brains.

Nothing the user "sees" and "hears" in the virtual world actually comes from our eyes and ears. Everything is manipulated directly in the respective parts of our brain used to process each of the five senses.

Lastly, how does a nerve gear kill someone?

It uses electromagnetic waves to "fry" your brain. 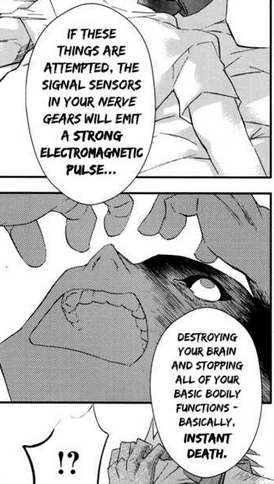 If these things are attempted, the signal sensors in your nerve gears will emit a strong electromagnetic pulse...

Destroying your brain and stopping all of your basic bodily functions - basically, instant death.

8
How/When did Liz learn about Kirito's Duel Wield?
9
How do online Nerve Gear games handle player authentication?
9
How did Kirito's Illusion actually kill?
9
Did Kirito lie about being the *best* beta tester?
17
What is Kirito's relationship with the girls of SAO?
21
Is there any proof that players really die in real life after dying in SAO?
6
How to summarize the whole SAO, Sword Art Online, franchise?
4
Did Pitohui have a special nerve gear?
4
How do loot and item drops work?
4
How did Heathcliff manipulate Kirito and Asuna back to the battlefield?