What is that accessory featured around Japanese gods' necks?

It's like a...fluffy...thingy. It floats around their head and past their shoulders and down to their waist. I see it a lot. The two characters with it who come to mind are Guren from Shounen Onmyouji and Elsie from The World God Only Knows, but there are others with the same accessory. I'm just curious as to what it is. Attached is Guren with the...thingy. 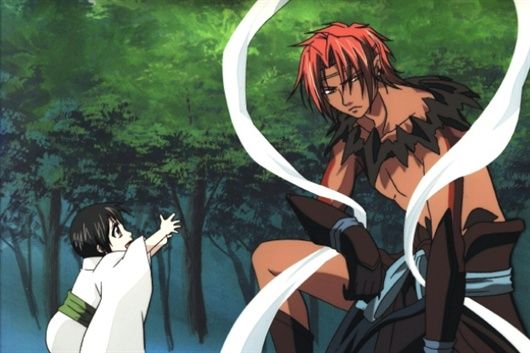 This is actually a culture/belief thing, so it is a real thing. It occurs in many Asian countries, like China and Japan. Here is a picture of it in real life: 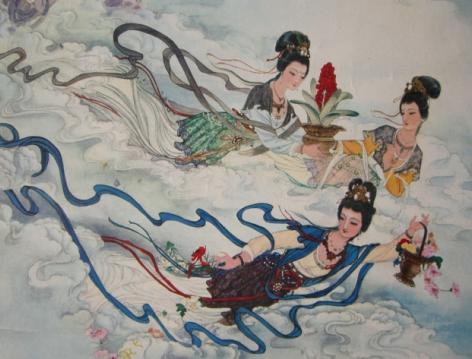 Basically, it is a silk scarf, a really long one. It is not only used by gods; in the ancient times, dancers and women performing in front of people with some sort of power (such as money or governing) would usually wear this. When people in real life wear it, it obviously won't be like that; it would be like a normal scarf, as you can see from this picture: 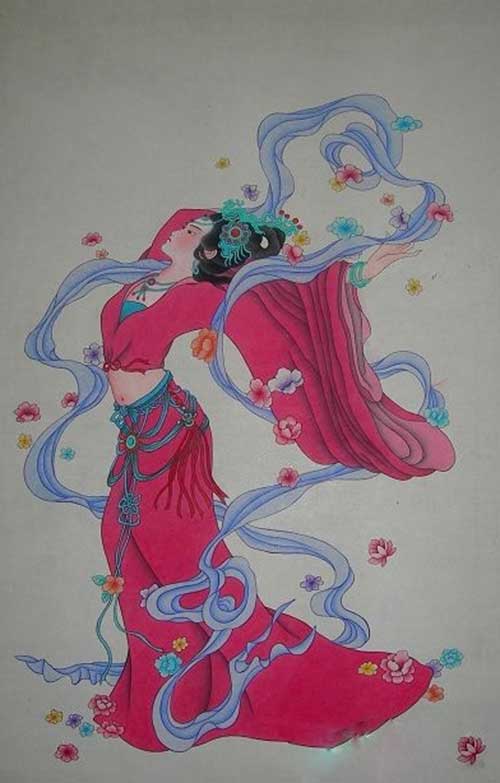 In there the scarf is floating around the woman: this is to bring out her aura and beauty.

That's the basic idea, though I might have missed certain details. If anyone is reading this and think I didn't put down the correct answer, please add on. Hope this helps.

They're a type of shawl or scarf called "hagoromo" (yes, like the Naruto character). They supposedly stay upright and flowing with divine energy. In reality, they're just normal, thin silk ribbons.

They're called Tenne somewhere around the bronze age where Japan had an influx of Buddhist culture. http://www.onmarkproductions.com/html/drapery-robes-japan-buddha-statues.html

As the previous answers noted, they are a Buddhist accessory, and the style originated in India.

In ancient India before colonisation, there was a type of fabric from Bengal called muslin, which was fabled to be lighter than air, and coveted by emperors of Persia, China, and south-east Asia, and monarchies of Europe. The thread counts on Bengal muslin reached over 1,000 (for comparison, modern clothing is around 50ish), and fabric research is currently only able to make fabrics with thread counts of around 400.

Bengal's muslin and cotton industry made that area of India alone hold around 20% of the world economy of the time, so when the British wanted to start its own cotton industry, they banned Bengal muslin, cut off the thumbs of the weavers, and the cultivar of cotton needed to make this special Muslin has gone extinct and the practice has been lost to history. It was also see-through like what is usually shown in anime (like Aqua's raiment in KonoSuba), and I'm sure in some cases it was made stiffer to be able to stand like they show in anime.

77
What is the purpose of characters shouting out the name of their attack?
2
Why does damaging something sometimes make it more powerful?
5
Why is the childhood friend trope commonly seen in anime?
2
What are these designs based on?
4
What is the relevancy between the common theme of Knight’s & Magic, In Another World With My Smartphone, and KonoSuba?
13
What's the origin of spiral glasses as a Japanese stereotype?
6
Why do anime mothers often get the short end of the stick?
6
How to tell apart Japanese and non-Japanese characters in-universe and out-of-universe?
4
Why is Kaguya depicted with a flower growing out of her head when in her moron/fool form?